Disclaimer: This was my experience during my particular exchange season; these to-do lists and processes may change pending updated ETH or UBC policies. None of the suggestions here should be taken as official instructions from any named organizations.

Here are a few things that I had to address in the first weeks. Make sure you keep an eye on the deadlines and instructions for all of these tasks. I’ll try to elaborate on them in the next couple posts.

Before all of the above, I was debating between finding my own place and roommates or taking advantage of WOKO, a student housing organization separate from ETH that places you in one of their dorms that vary wildly in configurations. Ultimately I went with WOKO as the dorms were typically 30-50% cheaper than sharing a 2-3 bedroom flat in Zurich. Plus, few landlords would choose an international student that communicated through phone calls over a local student or prospect tenant.

Check out their current properties here. You might notice the sprawled placement of these buildings compared to the ETH and UZH campuses. Remember Zurich is 680 years old (4.5 Canadas in SI units) and the campuses were established before student dorms became the norm. You might find the newer “Honggerberg” campus layout more familiar, but for those with classes in Zentrum, pay special attention to the net vs effective distances from your WOKO placement to campus; some residences that seem close or similarly-distanced may be much longer on transit. Meierwiesenstrasse 62 for example, looks just as close to Zentrum as something in Oerlikon but the steep winding nature of the topology there means one building might require 10-15 minutes longer to get downtown.

Note: WOKO will place you in an available building at their discretion but you have an opportunity afterwards to request a relocation if possible. WOKO dorms vary from townhouse style 4-8 bedroom units to true dorm buildings with shared bathrooms and kitchens across a whole floor of rooms. Naturally, there are advantages and disadvantages to both. I lived in what’s considered the “party dorm”. While you can’t influence your first placement, you can then petition to change the building after hearing from WOKO. The advantages and disadvantages are all vice-versa between the two. My dorm housed mostly international students, from Master’s to Post-Docs in various fields, with STEM being the majority. I got to meet friendly, brilliant people from all over the world. Exchange tends to select for adventurous types, so it was easy finding conversation and activities in the lounge. 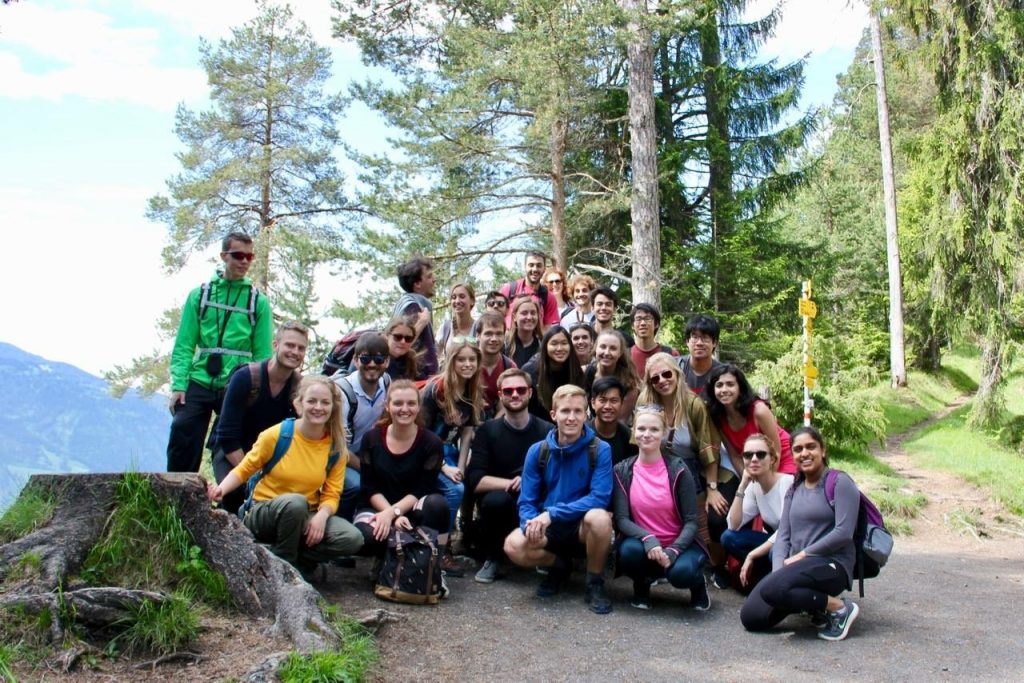 Somewhere in Flims – One of many excursions organized in the dorms. 9 countries represented here!

Pain points include sharing a huge kitchen with 160 amateur chefs. While cookware was provided, most of them were burnt, melted, or broken by the third month. I’d suggest buying your own if you have sensitive food allergies. Meal times meant crowded spaces too, so some strategy is involved in eating quickly. Some students formed cooking clubs, which seemed really successful. By the summer months, we had BBQ options outdoors. Some students almost ate all their meals at the school cafeteria. This option was about 40-60% more expensive than preparing your own meals.

The townhouses seemed quieter and much cleaner, with a higher likelihood of better shared areas like kitchens and bathrooms. However, friends reported a lot more variance in the “vibe” of the residence, with their experiences depending heavily on the personalities of their roommates. Naturally, it’s less likely that you’ll meet a best friend in a random set of 8 than 160. We had some people hanging out in the party dorm most nights just to get away from the isolation at home.

When you first move in to the WOKO residence, you’ll have to go to the separate WOKO office to sign the official contract, bring it to your residence manager/representative, and get your room checked over for pre-existing issues. Make sure you’re thorough with reporting any pre-existing issues, as failure to have written reports of a stain or dent can cost you at the end of the stay. Salaries are high in Switzerland, so you can imagine labour costs in repairing a wall or floor.

The first payment includes the security deposit and can typically be sorted out before you leave Canada. I wired it through my bank at a local branch fairly easily. Just bring in the deposit/first rent forms that WOKO provide once they place you somewhere.