I participated in #CLMOOC (connected learning MOOC) in the summer of 2016, at least a little bit (see a couple of posts in the CLMOOC category here on my blog).

I created a “Find 5 Friday” post on Storify during that time, and as Storify is shutting its doors and deleting all content in a week or so (May 2018) I’m archiving important stories from there, here on my blog.

Nazife posted in the #clmooc Google plus group a couple of lines from Rumi:

“Why do you stay in prison

When the door is so wide open?”

If you click on the link to the G+ post above you can see the very apt image she posted, with these lines superimposed on it.

I found this very thought-provoking, and wondered what prisons I am staying in, even without realizing it. That is a theme for my #F5F (of which one is the Nazife’s post!). Some of the prisons I’m in are based in fear, so the following are ways I got past that this week.

Terry Elliott wrote a post in which he claims he “stole” a poem from Deanna Mascle and made something new from it.

He asked on his Google Plus post about this post, “We are collaborating with our #DailyConnect , but…what if the collaboration is unbidden.” He didn’t ask, he just took the original and made something new.

That’s something I’ve very familiar with from #ds106–taking what someone else has created, even without asking, and making something else. It’s part of the culture of sharing and making there. So this wasn’t surprising to me.

And what was really cool is that Deanna had made her original picture from words she collected from others in CLMOOC. Talk about collaboration!

Deanna’s also a great post on its own, putting together many people’s contributions to week 1!

It’s a great example of showcasing what others have done and doing something wonderful with it.

What was surprising to me was that even though at the end of his post above Terry invited us explicitly to collaborate on his own poem made from Deanna’s picture, I was really wary about doing so. Here is the Hackpad he invited us to play on.

I did add some things and created a section of the pad that could stand on its own as a poem, but I left the rest of what he had written at the bottom, as if afraid to touch it. As if I shouldn’t really mess with it. Sure, it was partly to leave it in case others wanted to use that part and make something new, but really it was because I felt very awkward taking someone else’s words and changing them.

And that’s strange to me because I do it all the time with pictures in #ds106, but somehow with writing it felt different. The words felt like they were more attached to the person and I shouldn’t mess with them. Even when Terry explicitly said to do so!

But I got over that and did it anyway, at least to some degree. So I got out of that “prison,” so to speak.

Karen LaBonte wrote in her week 1 reflection that she has often started off strong in MOOCs but then:

“typically, within a couple of of weeks, I am floundering in the backwash of folks who seem to instinctively know the who, what, where, when, and why: who to talk to, when, what to say, what they want to gain from the experience, what they can offer others, etc. As I teetered on the cusp of CLMOOC2016, I wondered whether MOOCs are made for extroverts, which in many ways, I am not.”

I found this really important to consider. I am an extrovert online, someone who puts herself out there in many ways and hopes for the best. This week I shared my very personal grief over some of the horror that has been happening in the world this summer, as I struggled with my emotions on one of the days this week and decided to do a drawing to try to express them. I was a little worried about sharing that pain and that drawing with strangers, but I decided to try and got wonderful support back (and even Daniel Bassill making a remix of my drawing, which helped me immensely).

I appreciated the reminder that some people find open, online courses difficult and can get lost in the flow, feel somewhat left out when others seem to know exactly what to do. What I can say, though, is that so far I am finding CLMOOC to be a very inviting space and I hope that people who might otherwise flounder a bit can find their footing here in this kind, supportive, open and fun group!

I also loved Karen’s stories about the unexpected smiles she shared one day, one through Pokemon Go and one just from someone on the street who wished her a good day out of the blue. Knowing that that still happens, and there are wonderful people in the world, was something I needed to hear this week.

One of the #dailyconnects for week 1 was to explore one’s edge.

What is your edge and how do you approach falling off? That resonated with the theme I’ve chosen for my #F5F this week, of what prisons I find myself in based in fear.

Sheri Edwards created a lovely picture in which she explores her own edge.

Sheri talks about going over the edge of shyness, and realizing that when you fall off, that is when you can fly. And grow, and change.

One of my edges currently is with drawing. It’s something I’ve always thought I just couldn’t do, even while others could. Recently I decided to, well, just start and practice–because how can you get good if you never do it? That’s one of my edges I’ll be pushing in #clmooc this summer, and I’m glad to have a supportive and kind bunch of people to push it with! 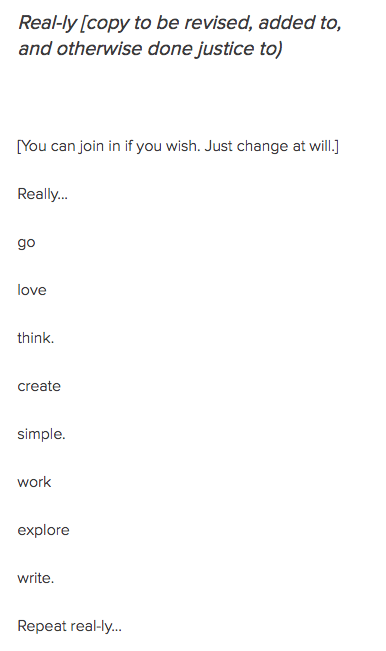 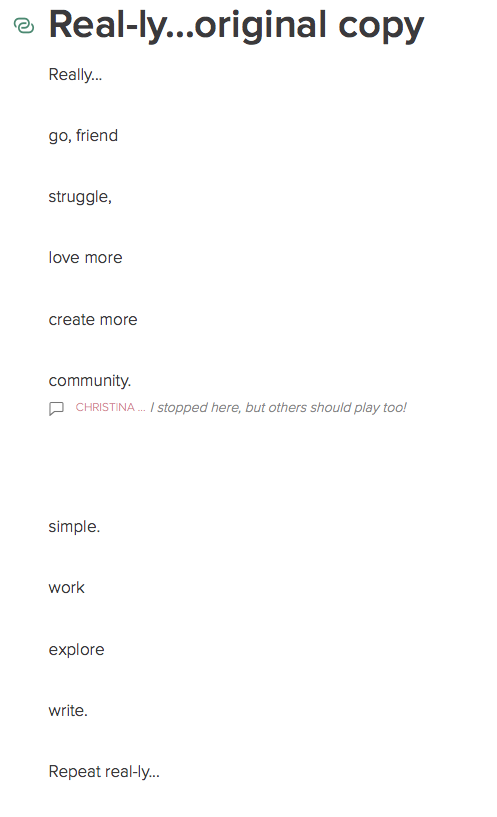 I have sometimes participated off and on in #clmooc–Connected Learning MOOC. This is an open, online course that’s about connecting with others and making things. I don’t know how much I’ll be able to participate this year either, but I’ll do what I can!

The first “make cycle” is all about introducing ourselves and getting to know others. We were encouraged to introduce ourselves in one of numerous ways. I’ve recently been trying to practice more drawing because it’s the one thing in my life I feel like I just “can’t” do, and that poses a challenge–well, I won’t be able to unless I practice more! And I got inspired to do that at the Sketching in Practice Symposium at the end of June. So I decided to do a drawing.

I was inspired to do this particular one after reading a blog post by Helen DeWaard called “The True You: Iterations of a Bio.” She reflects on bio statements and how we craft different ones for different purposes. When I thought about this, I realized that most bios I’ve written are still just about my professional life. Maybe that’s because the contexts are somehow related to my professional life, but still. I feel like that aspect of my life takes over a lot of the rest of it, too often.

DeWaard also asked a question that struck right at the heart of this issue for me:

When it comes to social media, your bio is part of your presence. Do you reveal who you are or what you do? Is there a way to reveal both?

Mostly I reveal what I do. Or what I care about, but even then it’s related to what I do.

Thinking about these things, I came up with a series of drawings to act as a preliminary intro to me. To who I am and what I do. Or maybe just what I do but not all about work. I still haven’t decided how to reveal “who I am.” Or really, who that is. 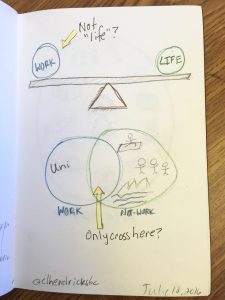 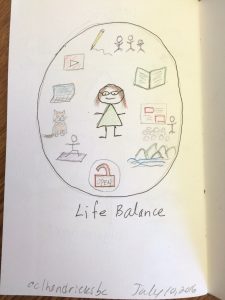