Mindfulness: Listen to the Sounds

“Several times a day, stop and just listen. Open your hearing 360 degrees, as if your ears were giant radar dishes. Listen to the obvious sounds, and the subtle sounds—in your body, in the room, in the building, and outside. Listen as if you had just landed from a foreign planet and didn’t know what was making these sounds. See if you can hear all sounds as music being played just for you.” (Chozen Bays, 2011, p.49)

To remind yourself, post a drawing of an ear in your home and/or other places you spend a lot of time, sketch a drawing in your notebook, and/or set up “alerts” on your phone, computer….

Reference: Chozen Bays, J. (2011). How to train a wild elephant and other adventures in mindfulness. Boston, Massachusetts. 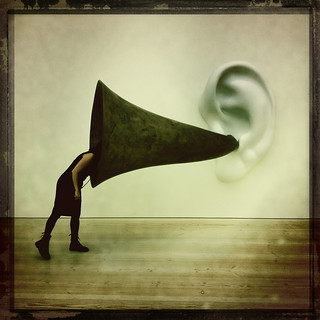 This entry was posted in Mindfulness. Bookmark the permalink.