On Friday I went on my second-to-last trip of my exchange journey – a day trip to Glasgow with a friend from my residence and a friend-of-a-friend who was visiting from Granada, where she’s on exchange. The three of us made pretty good travel companions, although we didn’t end up needing the nearly 12 hours we gave ourselves in a city whose centre is pretty compact. 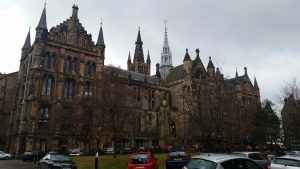 We started our day by taking the subway to the University of Glasgow campus. When I applied to go on exchange (through Go Global), Glasgow was my second choice, after Edinburgh. Having now been to the campus, I can see the appeal—it’s a historic school, like the University of Edinburgh, and the old buildings are gorgeous—but I am glad I ended up where I did. 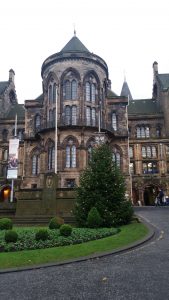 The weather was grey, but not rainy – so a lucky day by Scottish standards. The subway system in Glasgow, by the way, is very minimal; it’s a loop that goes around the city centre with an ‘inner’ and ‘outer’ line that go different directions around the loop. A quick Google search tells me that it’s just been modernized, and it is definitely very clean and organized, particularly compared to the systems in Paris and London (although much less expansive). 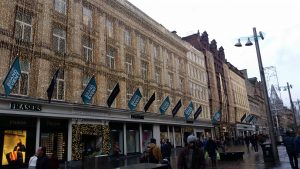 After pretending to be University of Glasgow students for a little while, we went back to the city centre and, because we are cheesy Christmas-loving tourists, went to look at the Christmas floor at Frasers, decked out (like Harrods) in lights – I have to say that I miss the colourful lights and weird house decorations that seem to be more typical in North America. Here, it’s all white lights on stores, and the occasional house window décor, but nothing like the massive yard displays of inflatable Santas, nativity scenes, and sleighs with reindeer we get at home! 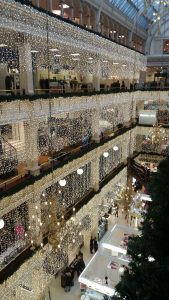 The inside was really magical and Christmassy, and while I didn’t end up buying anything here, it made for a good photo-op (and we later ended up at Debenhams, where I did actually buy some Christmas presents, although the interior wasn’t quite as nicely decorated). 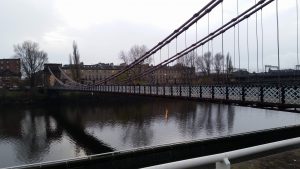 We decided we had to go take a couple of pictures of the river Clyde, which runs through the middle of Glasgow – one of the most striking things about the city was the juxtaposition of clean, new, well-kept buildings next to older, dirtier ones covered in graffiti. For instance, on the road that runs along the north bank of the river, there’s a beautiful church next to big boxy factory-like buildings and empty lots … and the suspension bridge that crosses the river is really cool, but the buildings on the other side look a bit unkempt. 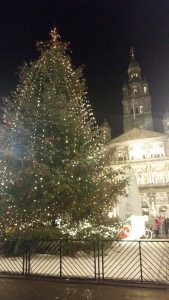 Afterwards, we did a bit more wandering and Christmas shopping, then had dinner at Jamie’s Italian – not cheap, but good food and a worthwhile ‘UK’ experience that’s pretty difficult to replicate in Canada. (I had to Google this too, and discovered that there are in fact two Jamie’s Italians in Canada – one in Mississauga and one in Toronto. As usual, no love for the West Coast.) After dinner, we went to a Christmas market and I couldn’t resist capturing this giant decorated tree … 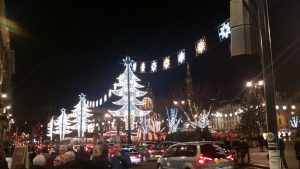 The Christmas market is behind all the tree-shaped lights – kind of difficult to see, but it was the bigger of the two in the city, although not as big as the massive one in Edinburgh or the one in Paris that goes down most of the Champs-Élysées.

Given that I’m buried in exam studying (‘revision’ here), it feels unfathomable that I’m leaving Edinburgh in only 12 days. However, as a Christmas lover, I can safely say that I am excited for ten days to relax, recharge, and spend some time with my family before I have to start classes again on January 3rd … thanks, UBC.

Next up: going down to visit my Scottish relatives one last time, plus two exams and two papers (‘essays’), and somehow, inexplicably, turning 21.

If all goes to plan, I’ll post some kind of a reflection on my trip as a whole in the coming week! Until then, it’s back to studying 🙂