Last week, I had the pleasure of giving a short talk to people in the Faculty of Education here at UBC as part of their Research Week 2014. I was part of a panel of Canada Research Chairs invited to speak to professors and students about my research. In particular, we were asked to focus on what our research had to say that was of relevance for teacher training and practice. It was a really interesting exercise for me, thinking about my work from a more practical perspective. I only had 15 minutes, so it had to be somewhat direct, and without much of the detail I would usually include in a talk. I decided to give them a whirlwind tour of my work I’ve been involved in, and linked studies together in rather non-traditional ways. Instead of linking work by specific research questions, I linked it by messages that were relevant to education/educators.

The title of the talk was “The Role and Function of Input in Language Acquisition”. It was not really a description of what I was going to tell them, rather, how I see all of my work being linked. It is the tie that binds all of my work together. I know that the various projects I have and continue to work on might seem scattered to an outside observer. To my mind, that is largely due to the way we write papers – self-contained units that outline a small question or issue. My work is linked by the theme that was the title of my talk. I then broke it down into three section, each of which contained a message for the educators. But really, these are things that I have learned, ways my thinking has changed, that I thought were worth sharing.

Each section had a question, and a take home message attached to it. The first set of findings I talked about were bound together by the question How do children (and adults) learn language? I get at this question by examining the relationship between input and output, with the idea that understanding the function from one to the other tells us something about the mechanisms, or the ‘how’. Here I talked about the work on the learning of variation, as well as a lot of work conducted by Amy Finn. The take home message here was that children are not just little adults, or adults missing some cognitive ‘piece’ or ability. While it may make sense to discuss them that way, if we want to understand learning, we have to understand that even in a system that is ‘missing’ some ability, the system will still function, just differently, and that that difference will not necessarily be a simple mapping to the abilities that the system does have available. Think of it more like a recipe with a replacement ingredient than a puzzle with a missing piece.

The second body of work (or bodies) was introduced by the question How do children learn about language? It is work directed at understanding the nature of the input itself/directly expanding how we might think about input. In the field of language acquisition we often think of input just in terms of the speech the child hears. But learning takes place in a rich communicative environment, and we need to consider that more carefully. Here, I made the point, rather counter-intuitively, that just because there is other input available (e.g., gesture) doesn’t mean it will be used. I also pointed out that context can actually impede learning at times. Here, I was referring mostly to the work by Tim Beyer on AAE-speaking children’s interpretation of SAE. We can’t just assume that providing extra information will help children – they may not be ready or able to use it. And even when they do, it may not be scaffolding acquisition in the ways we assume.

The third section of the talk was focused on the question of ‘How children learn from language?” There, I talked about some new work I am just starting to do (in collaboration with Carrie Ichikawa Jenkins over in Philosophy) on explanations and the development of explanatory preferences. There, the message was just that children make generalizations over the patterns they hear, including some very abstract ones, and that we should be mindful of this when talking to children. Or as I put it “we need to think more critically about the ways we talk about things, and how they can impact children’s generalizations about knowledge”.

Macaela MacWilliams will be presenting a poster entitled “Input effect in the sensitive period for language acquisition” at the Multidisciplinary Undergraduate Research Conference (MURC) here at UBC this upcoming Saturday, March 22, 2014.

It’s a project she worked on as part of her NSERC Undergraduate Research Award last summer. The basic idea behind the project is to see if we can improve adult L2 learning outcomes by manipulating their input such that they learn more like infants do – sound patterns first, meaning later. I don’t want to give away too many of the details, as we will likely be submitting this to our favorite acquisition conference soon… 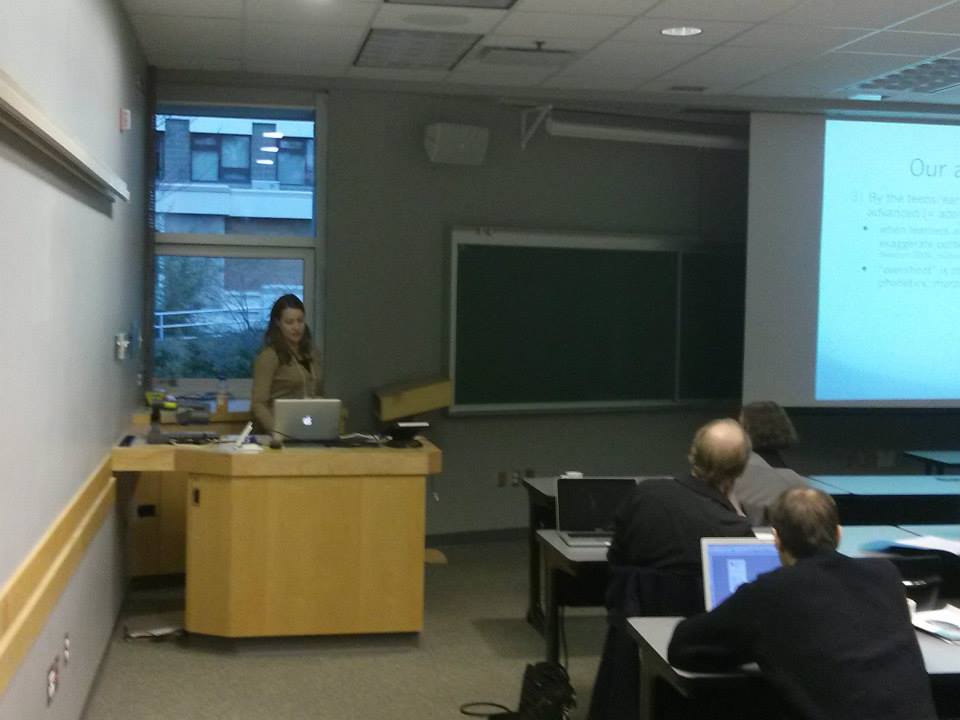