Now that I’m done with finals, I have some time to reflect back on the first term of my 3rd year.

I haven’t gotten my final grades back, so I’ll have to hold on making a complete judgement, but overall I think this semester went smoother than MECH2.  If MECH 2 was a 10/10 on a difficulty scale (for the sake of argument) this semester was probably a solid 7/10.

Here’s my overall impression of my classes:

The class has recently been redesigned and this year was its first run through.  It’s essentially labs and statistics.  There are five regular labs in total, which draw on concepts from other courses.  You go in, follow the procedure, and write up a lab report.  The next week you expand on one of the regular labs by setting up your own objectives, and deciding how you’ll carry the experiment out.

At the very end of the course, there was one big exploratory lab report in which we were free to explore anything we wanted using the techniques we learned throughout the semester.  My team ended up wiring strain gauges to a hockey stick in order to determine the forces applied to it during a slap shot.  We even had someone that had played hockey semi-professionally take some shots with it, shot-out to Jackson. It was pretty neat. 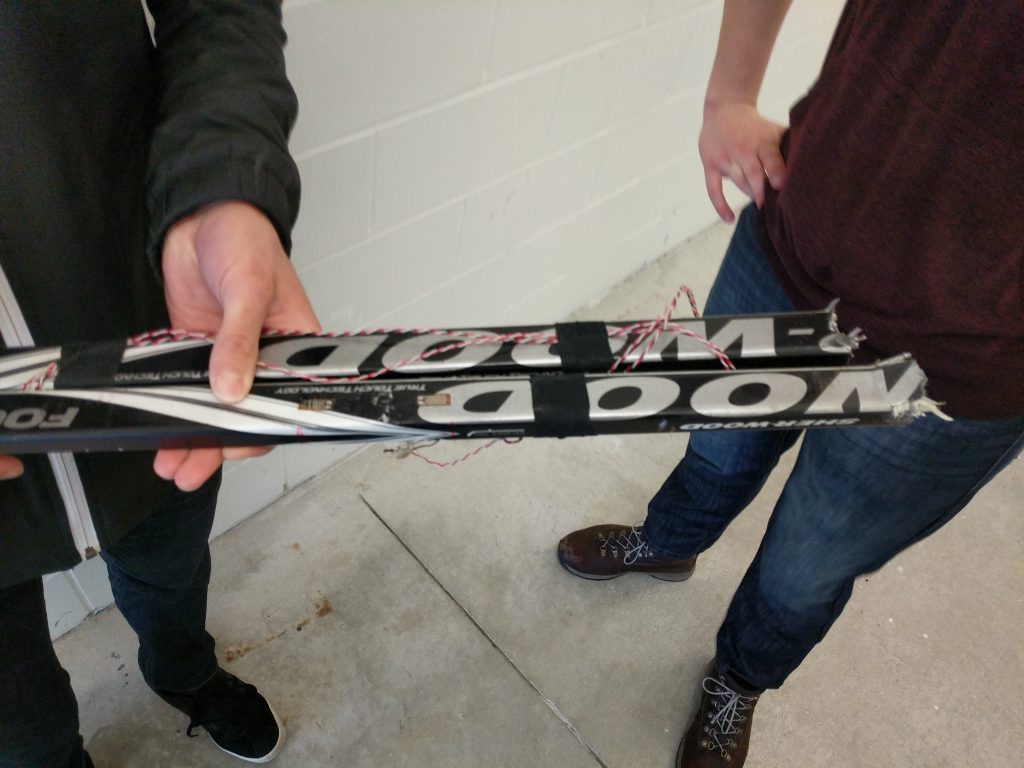 This class was by far the most abstract out of all of the classes this term, since it builds on linear algebra concepts. You learn how to solve equations that can be incredibly hard/impossible to solve numerically, like the heat equation which you’ll come to know and love (here’s a quick preview of that lovely equation).  I didn’t particularly enjoy linear algebra back when I took it on 1st year, but I actually enjoyed this class.  My biggest takeaway from the course was that even though we have large amounts of computational power, you have to be clever in how you go about computing certain problems.

Homework consists of matlab and lots of “why doesn’t my code work.”

This class is a continuation of solid mechanics in MECH224.  There’s a lot of material covered, so doing the practice problems and tutorials is a must.  Luckily, there are tons of online resources.  There’s not much to say about this course except study hard for that final. I got completely blind-sided by it, and I’m still sweating about it.  Don’t let that happen to you.

The class is technically called heat transfer but we all referred to it as thermo.  We covered a lot of material, and in my opinion it was one of the more challenging classes this term.  There’s correlations and numeric tables all over the place.  Prepare to sprint with your hands during exams.  For the final you get a crib sheet, which is a 40 page formula packet.

Surprisingly, I enjoyed the topic as a whole.  The class was held in the MATH building and I hope for the sake of anyone reading this that you never have a class in that building.  The seating arrangement and the size of the chairs is terrible.  That classroom get a -1/10 from me.

Here’s another class that I really enjoyed.  It felt like an intro to aerodynamics.  You gain greater insight into drag/lift and learn about mach numbers and shockwaves.  The concepts can be tricky, but I found it manageable.   Engineering Analysis, Heat Transfer, and Fluid Dynamics all tie into each other, so if you understand one it can sort of help with the others.

Like I said, I’m still waiting for my final marks so I might be singing a different tune once I get them back, but this year wasn’t so bad.

Now it’s back to Co-op for the summer.