It’s not uncommon to hear, as I wander the halls at UBC, faculty complaining about students preoccupied with their computers and phones in class. The most common solution is to just ignore it (“if they don’t want to pay attention to the class, it’s their loss…”) Can’t disagree with that, as long as students aren’t distracting others who are trying to pay attention. Another solution is to ban computers and phones. Well, some students legitimately need their computers (students with disabilities, for example) so I know of a few instructors who ask these students to sit over there, off to the side.

But here’s another solution: don’t forbid phones in class, embrace them.

Naive? Perhaps. Impossible to faciliate? Ye— Ah! Not so fast!

The April 2011 issue of The Physics Teacher contains an article by Angela M. Kelly that describes a collection of iPod Touch apps (which should also on iPhone and iPad) and how to use them to teach Newton’s Laws of Motion.  Cool idea: use the games the students are already playing to teach them physics.

I want to add to her list my own favourite physics app. This one’s not a game so it might not – no, who am I kidding, will not –  have the same appeal. But xSensor (which, at the time I write this, is free!) is a great physics app because it gives a real-time readout of the accelerometer, in the x-, y- and z-directions. The pix below are screenshots from my iPhone (captured with that magical “click on/off and home buttons at the same time” feature.) Here are a couple of screenshots that show some cool physics. The app will also record the data in a log you can email yourself. 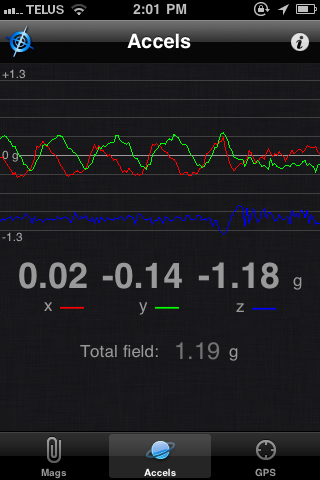 I made this one by putting my iPhone flat on my desk and swirling it around and around. The curves sweeps across the screen recording about 5 seconds of readings. The numbers on the screen, 0.02, -0.14 and -1.18 are the instantaneous accelerations measured in g’s.  The z-acceleration is pretty constant at -1 g. Can’t get rid of gravity… The accelerations in the x-direction and y-direction show beautiful sinusoidal motion, 90 degrees out-of-phase, encoding the centripetal force of the phone’s circular motion. It’s shaky because I can’t swirl my phone smoothly.

Okay, the “can’t get rid of gravity…” line was a strawman. Because you can. If you drop your phone. Which I did. Very carefully. 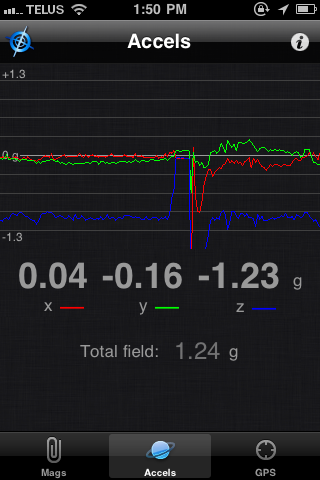 xSensor screenshot during free fall when, for a brief moment, the phone recorded zero acceleration.

These graphs show me holding my phone still. About halfway through the plot, I dropped it. For a short period of time, the acceleration in z-direction snaps up to zero g’s: free fall! Then there’s a big blip as I clumsily catch my phone and take the screenshot. But there, just for that moment in free fall, my phone appeared to be force free. That’s Einstein’s Principle of Equivalence: floating free in deep space is just like freely falling in a gravitational field. (That NASA link include the famous Apollo 15 hammer/feather drop video.) It’s not a Gedankenexperiment, though. It’s the real thing, right there in your hand! Well, you know what I mean.

So, don’t ban phones from your physics, astronomy or science classrooms: embrace them! Better yet, chuck ’em across the room!

Do you have a favourite physics app? Have you discovered another cool experiment you can do with xSensor? Hope you’ll share it with us.

Find me on Twitter @polarisdotca
View all posts by Peter Newbury →
This entry was posted in interpreting graphs, physics, teaching and tagged education, graphs, science, technology. Bookmark the permalink.