A misconception about extrasolar planets

A couple of weeks ago in the introductory “Astro 101” class I work in, the instructor and I confirmed that many students hold a certain misconception. I was, still am, pretty excited about this little discovery in astronomy education. If my conversations over the following few days had turned out differently, I probably would be writing it for publication in the Astronomy Education Review. Maybe I still will. But for now, here’s my story.

Our search for life in the Universe and the flood of results from the Kepler Mission have made the discovery of extrasolar planets an exciting and relevant topic for introductory “Astro 101” courses and presentations to the general public.  Instructors, students, presenters and audiences latch onto “the transit method” of detection because it is so intuitive: when an extrasolar planet passes between us and its star, the planet temporarily blocks some star light and we detect a dip in the brightness of the star. The period and shape of the dips in the record of the star’s brightness encode the characteristics of the planet. 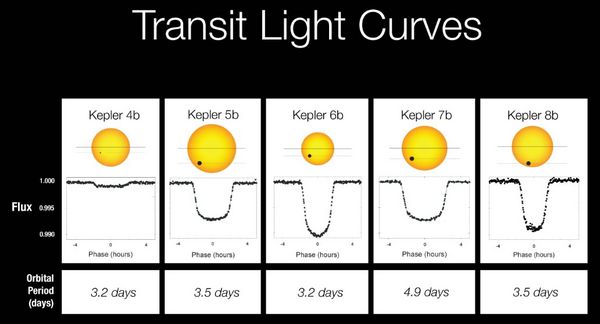 When an extrasolar planet passes between us and its star (when it "transits" the star) we detect a dip in the brightness of the star. (Kepler/NASA image)

Our students do a nice 50-minute, hands-on lab about how to decode these “light curves” which I hope to share at the ASP 2011 conference (#ASP2011 on Twitter) in July. In a class following this lab, the instructor posed the following think-pair-share clicker question. We wanted to assess if the students remembered that the size of the dip is proportional to the area of the star blocked by the planet’s disk, which scales as the square of the diameters: 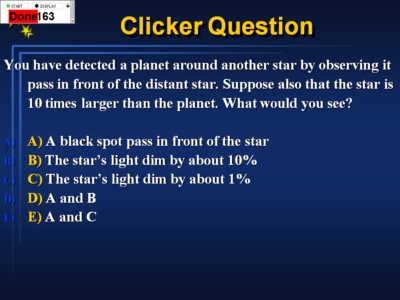 Clicker question to assess the students' grasp of the transit method of detecting extrasolar planets.

The bars in this histogram record the number of students who chose (from left to right) A to E: 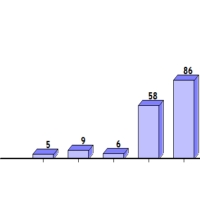 Students' responses for (left to right) choices A to E to extrasolar planets clicker question.

About 60% of the class chose answers (C and E) with a 1% drop in brightness, the correct drop, and about 40% chose answers B and D with a 10% drop. This second group didn’t remember the “proportional to area” property. So, not stunning results, certainly a good candidate for pairing and sharing.

What is stunning, though, and the source of my excitement, is that 97% of the class feels you see a black spot moving across the star. Which is not true! We only detect the drop in the brightness of the star. We can’t even see the disk of the star, let alone a tiny black spot!

Astronomers may not see a “dot” crossing the star right now, but they can see something comparable. Through speckle imaging, radial topography and optical interferometry we have been able to see starspots for decades. CHARA’s recent direct observations of a disk of dust moving across epsilon Aurigae shows what is being done right now in interferometric direct imaging. I predict within 10 years we’ll have our first direct image of a “dot” in transit across another star.

With current technology, can astronomers resolve the dark spot of an extrasolar planet on the disk of a star when it is in transit? (T/F)

Was there a misconception?

Did the students reveal a misconception about transiting extrasolar planets. Nope, not at all. It’s not like they took the information we gave them, mixed it with their own preconceived notions and produced an incorrect explanation. Instead, they answered with the information they’d been given.

It seems that we’re not being careful enough in how we present the phenomenon of transiting extrasolar planets. But as it turns out, this is a teachable moment about creating models to help us visualize something (currently) beyond our reach. We observe variations in the brightness of the star. We then create a model in our mind’s eye — a large, bright disk for the star and a small, dark disk for the planet — that helps us explain the observations.

This is a very nice model, in fact, because it can be extended to explain other, more subtle aspects of transiting extrasolar planets, like a theoretical bump, not dip, in the brightness, when the planet is passing behind the star and we  see detect extra starlight reflected off the planet. The models also explains these beautiful Rossiter-McLaughlin wiggles in the star’s radial velocity (Doppler shift) curve as the extrasolar planet blocks first the side of the star spinning towards us and then the side spinning away from us.

These wiggles in the radial velocity curve are caused by the Rossiter-McLaughlin effect (from Winn, Johnson et al. 2006, ApJL)

If you’re teaching astronomy, you can help us by asking them this version, written by Kendra, and letting me know what happens.

An extrasolar planet passes in front of its star as seen from the Earth. The star’s diameter is 10 times bigger than the planet’s diameter. What do astronomers observe when this happens?

I don’t think this qualifies as a misconception, not like the belief that the seasons are caused by changes in the distance between the Earth and the Sun. We’re just need to be more careful when we teach our students about extrasolar planets. And in more-carefully explaining the dips in the light curve, we have an opportunity to discuss the advantages and disadvantages of using models to visualize phenomena beyond our current abilities. That’s a win-win situation.

Thanks to my CAPER Team colleagues Aaron, Kendra and Donna Governor for the thoughtful conversations and the many #astro101 tweeps womanastronomer, erinleeryan, uoftastro, jossives, shanilv and more who were excited for me, and then patient with me, as I figured this out.

4 Responses to A misconception about extrasolar planets