As I’ve mentioned before, the folks at i>clicker lent me a set of the new i>clicker2 clickers. I had a chance to try them out this week when I filled in for an “Astro 101” instructor. I sure learned a lot in that 50 minutes! 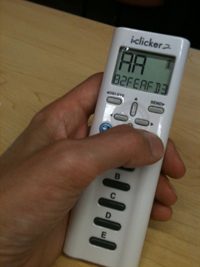 Just to refresh your memory, the i>clicker2 (or “ic2” as it’s also called, which is great because the “>” in “i>clicker2” is messing up some of my HTML) unit has the usual A, B, C, D, E buttons for submitting answers to multiple-choice questions. These new clickers (and receiver and software) also allow for numeric answers and alphanumeric answers. That last feature is particularly interesting because it allows instructors to ask ranking or chronological questions. In the old days, like last week, you could display 5 objects, scenarios or events and ask the student to rank them. But you have to adapt the answers because you have only 5 choices. Something like this:

These are killer questions for the students. What are they supposed to do? Work out the ranking on the side and then check that their ranking is in your list? What if their ranking isn’t there? Or game the question and work through each of the choices you give and say “yes” or “no”? There is so much needed to get the answer right besides understanding the concept.

That’s what’s so great about the ic2 alphanumeric mode. I asked this question about how the objects in our Galaxy appear to be moving relative to us: 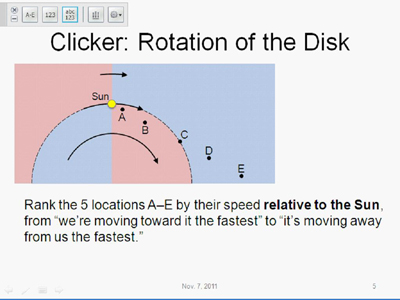 The alphanumeric mode of the ic2 allows instructors to easily ask ranking tasks like this one about the rotation of the Galaxy.

(Allow me a brief astronomy lesson. At this point in writing this post, I think it’ll be important later. Oh well, can’t hurt, right?)

The stars in our Galaxy orbit around the center. The Galaxy isn’t solid, though. Each star moves along its own path, at its own speed. At this point in the term [psst! we’re setting this up so the students will appreciate what the observed, flat rotation curve means: dark matter] there is a clear pattern: the farther the star is from the center of the Galaxy, the slower its orbital speed. That means stars closer to the center than us are moving faster and will “pass us on the inside lane.” When we observe them, they’re moving away from us. Similarly, we’re moving faster than objects farther from the center than we are, so we’re catching up to the ones ahead of us. Before we pass them, we observe them getting closer to us. That means the answer to my ranking question is EDCAB. Notice that location C is the same distance from the center of the Galaxy as us so it’s moving at the same speed as us. Therefore, we’re not moving towards or away from C — it’s the location where we cross from approaching (blueshifted) to receeding (redshifted).

As usual, I displayed the question, gave the students time to think, and then opened the poll. Students submit a 5-character word like “ABCDE”. The ic2 receiver cycles through the top 3 answers so the instructor can see what the students are thinking without revealing the results to the students.

I saw that there was one popular answer with a couple of other, so I decided enough students got the question right that -pair-share wouldn’t be necessary and displayed the results: 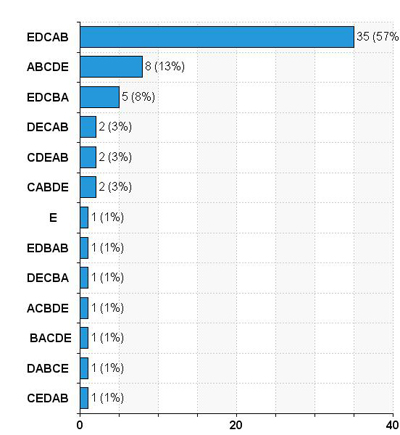 Students' answers for the galaxy rotation ranking task. The first bar, EDCAB, is correct. But what do the others tell you about the students' grasp of the concept?

In hindsight, I think I jumped the gun on that because, and here’s what I’ve been trying to get to in this post, I was unprepared to analyze the results of the poll. I did think far enough ahead to write down the correct answer, EDCAB, in big letters on my lesson plan. But what do the other answers tell us the students’ grasp of the concept?

I’m sure that agility is possible with ranking tasks. But I hadn’t anticipated it. So I did the best I could on the fly and said something like,

Good, many of you recognized that the objects farther from the center are moving slower, so we’re moving toward them. And away from the stars closer to the center than us.

[It was at this moment I realized I had no idea what the other answers meant!]

Uh, I notice almost everyone put location C at the middle of the list – good. It’s at the same distance and same speed as us, so we’re not moving away from or towards C.

Oh, and ABCDE? You must have ranked them in the opposite order, not the way I clumsily suggested in the question. [Which, you might notice, is not true. Oops.]

[And the other 15% who entered something else? Sorry, folks…]

What am I getting at here? First, these ranking tasks are awesome. Every answer is valid. None of that “I hope my answer is on the list…” And there’s no short-circuiting the answer by giving the students 5 choices, risking them gaming the answer by working backwards. I know there are lots of Astro 101 instructors already using ranking tasks, probably because of the great collection of tasks available at the University of Nebraska-Lincoln, but using them in class typically means distributing worksheets, possibly collecting them, perhaps asking one of those “old-fashioned” ranking task clicker questions. All that hassle is gone with ic2.

But it’s going to take re-training on the part of the instructor to be prepared for the results. In principle, there are 5! = 120 different 5-character words the students can enter. Now, of course, you don’t have anticipate what each of the 119 incorrect answers mean. But here are my recommendations:

I hope to try, and write about, some other types of questions with my collection of ic2 clickers. I’ve already tried a demo where students enter their predictions using the numeric mode. But that’s the subject for another post…

Do you use ranking tasks in your class, with ic2 or paper or something else, again? What advice can you offer that will help the instructor be more prepared and agile?

Find me on Twitter @polarisdotca
View all posts by Peter Newbury →
This entry was posted in astro 101, clickers, teaching and tagged astronomy, iclicker2, technology, think-pair-share. Bookmark the permalink.

8 Responses to My brief encounter with iclicker2 ranking tasks