As some of may have heard, i>clicker is coming out with new hardware. UBC Classroom Services is already installing the new i>clicker2 receiver in many classrooms. I’ve been working with them to design a holder that mounts the receiver on the desktop so the receiver is 1) secure 2) visible. 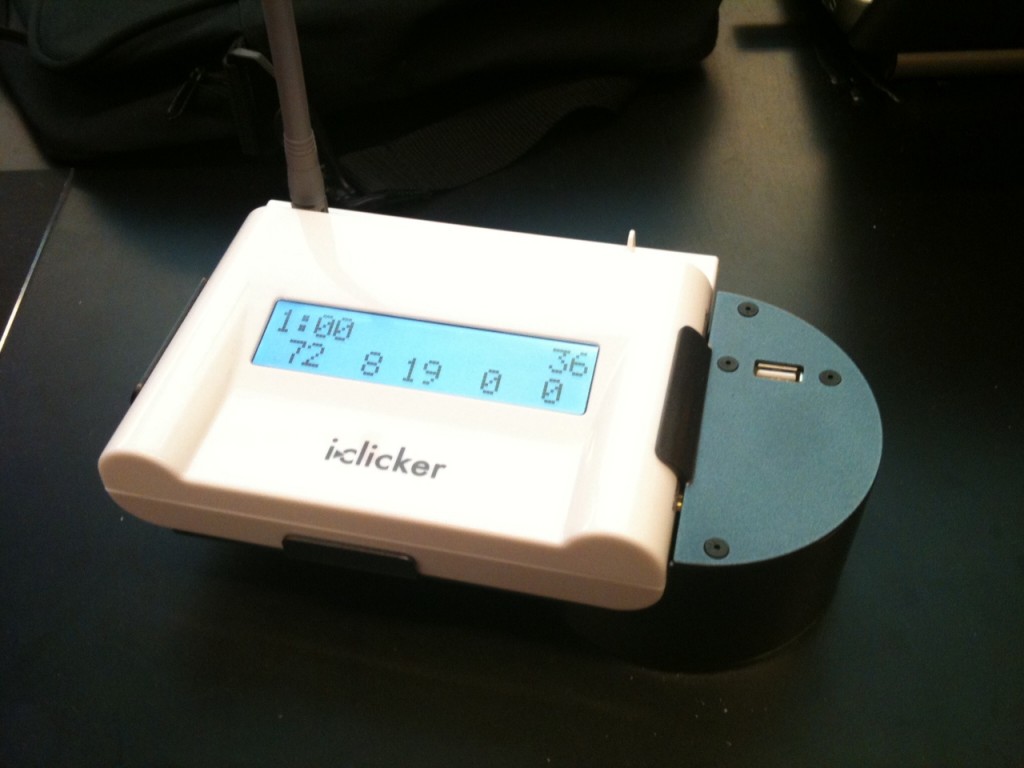 New i>clicker2 receiver mounted on classroom desktop with a base designed at UBC. The base swivels 359 degrees so the instructor can see the distribution from either side of the podium. That's a USB port on the base, where you plug in the chip with the i>clicker software and your class data. (Photo: Peter Newbury)

The i>clicker2 has more options, allowing for alpha-numeric responses in addition to the usual A thru E choices. (Image from iclicker.com)

This new receiver is fully compatible with the current i>clicker clickers, the simple, white A-E clickers we know and love.

No surprise, along with the new receiver comes a new i>clicker2 clicker.

Hold it, hold it! Don’t have a fit! Yes, there are more buttons and that seems to explicitly contradict i>clicker’s advertised simplicity. The first time I saw it, yes, I, er, had a fit.

However, I’ve since had a long chat with my colleague Roger Freedman (follow him on Twitter @RogerFreedman ) at UCSB. He’s a great educator, textbook author, avid clicker user, and i>clicker2 guinea pig. In his opinion, which I sincerely trust, i>clicker2 opens up new and powerful avenues for peer instruction. His favourite is ranking tasks which can be implemented without those awkward clicker questions with choices like A) 1>2=3>4 B) 1=2>3=4 …

Conclusion Let’s be pro-active and prepared to train instructors when the i>clicker2 arrives.

The first step (after finishing your fit) is figuring out what the new clicker can do. And that’s the reason for this post. In 30 minutes – er, make that 11 minutes – I’ll be heading to a demo. The rest of this post will be written shortly… 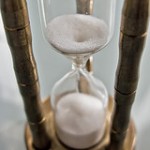 It’s 3 hours later. I’m E X C I T E D! The demo with Roberto and Shannon was, well, they had a wide spectrum of audience members, from never held a clicker before to experienced users. I had a great chat with them afterwards, though. Details below, but first, some nice features of the i>clicker2 unit:

I won’t go into all the details about the features of the software. There are lots.   You can take the tour at iclicker.com.

Those of us who have been using i>clickers for peer instruction have gotten pretty ingenious about asking good, discussion-promoting questions even though we’re limited to choices A–E. It’s going to take some thinking and discussion to figure out how to take advantage of the expanded capabilities of the i>clicker2. Ranking tasks are a great start: students can easily enter a string of letters like BCDEA to rank items. It’s going to take some testing. Which leads to…

Roberto and Shannon are going to lend me a class set of i>clicker2’s for the term! Eighty clickers to try out in the classes I work in. Suh-weet!

I was chatting with my friend Warren (@warcode) afterwards. He said, “When you asked Roberto to show you what i>clicker2 can do that i>clicker can’t, his response was, essentially, ‘Here’s a set clickers. You tell us.’ ”

Find me on Twitter @polarisdotca
View all posts by Peter Newbury →
This entry was posted in Uncategorized and tagged clickers, education, iclicker2, teaching, technology. Bookmark the permalink.

2 Responses to Click it up a notch with i>clicker2