I recently posted my 10,000th tweet on Twitter where I interact with my communities as @polarisdotca. (That’s “Polaris” for the North Star plus “.ca” in words to show my pride of being Canadian.) It was right in the middle of the Vancouver civic election so briefly I stepped away from my election conversations to tweet

What have I said in 10,000 tweets? I discovered Twapperkeeper about 6500 tweets ago so pushing that archive through Excel, grep (with excellent help from @aquillam and @anthonyfloyd) and Wordle, there are a few words that stand out: 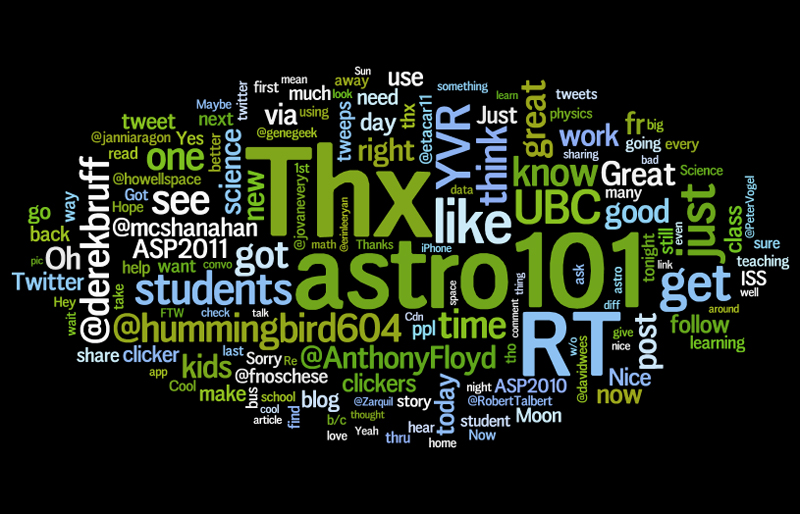 I think this is a pretty good picture of how I use Twitter. The 2nd biggest word is “astro 101”. That comes from the #astro101 hashtag I use on any tweet related to teaching the general education, introductory astronomy course typically called “Astro 101”. No surprise there — that’s a big part of my job.

The other 2 most common words: “Thx” and “RT”.  The first is pretty obvious and, true to character I guess, “thanks” are the subject of my 10,000ths tweet. I’m pleased to see “RT”. RT, shorthand for “retweet”, is how you bounce another twitter user’s message to your followers. It’s how you invite new readers to join the conversation. And that’s what I think Twitter is all about: connecting people through common interests.

Speaking of people and conversations, who do I talk to most? Here’s a wordle of the 100 tweeps I interact with more frequently. What a great group to be associated with!

I have most of my conversations with these folks.

I’m learning that hashtags, like #astro101, are one of Twitter’s most powerful tools. They tag messages with keywords so you can easily pick up and follow a conversation. They also identify the content of your tweets to your followers, the people who read your messages. If I’m not in the mood to follow #edchat or #canucks, I can quickly filter those messages out. I try to add useful hashtags whenever I can. I say “useful” because there are some very clever tweeps who are very good at the “I use hashtags for sarcasm and/or irony” game. Only very occasionally can I come up with a zinger so most of the time, I leave that to the pros. Here’s my most frequent hashtags. They, too, give a good picture of my, well, a good picture of me:

These are the hashtags, or keywords, I use most frequently. Makes it pretty clear what I do, where I work and where I play.

Once again tweeps, and readers too, thanks for helping me learn, making me laugh and for the friendship.

Find me on Twitter @polarisdotca
View all posts by Peter Newbury →
This entry was posted in astro 101, social media and tagged twitter. Bookmark the permalink.