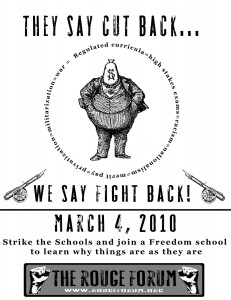 This is capitalism. It is not the highest or last stage of human development.

There is a connection between capitalism and imperialism, exploitation and war. One begets the other.

The key reasons for the attacks on working people and schools are rooted in those twins.

In the U.S. capitalism rapidly decays. The government is an executive committee and armed weapon of the ruling classes. There they work out their differences, allowing us to choose which one of them will oppress us best.

Capitalist education was never truly public, but always segregated by class and race. Beyond the call to Defend Public Education, we need to Transform Education to Serve the People.

The overwhelming majority of union mis-leaders choose the other side in what is surely a class struggle. They gain from the wars and capital by supporting those wars, winning their own high pay and benefits, and betraying workers— they’re a quisling force, organizing decay.

We can build a social movement that rejects the barriers US unionism creates, from job category to industry to race and sex and beyond.

People are more united throughout the world by systems of technology, transportation, communication, than ever before, but we are divided by class, race, nation, and sex-gender.

Why? Capitalism is necessarily a war of all on all.

Everything negative is in place for a revolutionary transformation of society:

The core issue of our time is the reality of endless war and rising inequality met by the potential of mass, active class conscious resistance.

We can fight to rescue education from the ruling classes.

You are welcome to join us.