The Phenomenon of Obama and the Agenda for Education
Can Hope Audaciously Trump Neoliberalism? 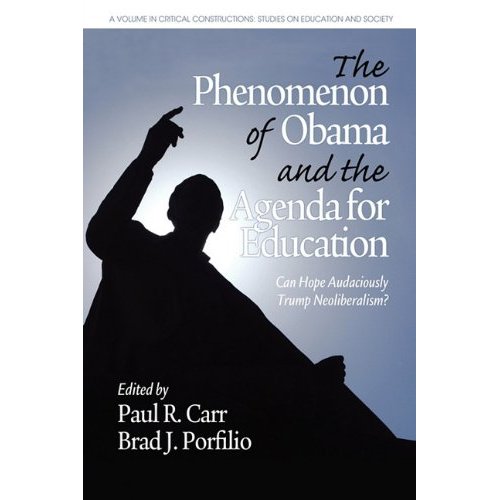 Who should read this book? Anyone who is touched by public education – teachers, administrators, teacher-educators, students, parents, politicians, pundits, and citizens – ought to read this book. It will speak to educators, policymakers and citizens who are concerned about the future of education and its relation to a robust, participatory democracy. The perspectives offered by a wonderfully diverse collection of contributors provide a glimpse into the complex, multilayered factors that shape, and are shaped by, institutions of schooling today. The analyses presented in this text are critical of how globalization and neoliberalism exert increasing levels of control over the public institutions meant to support the common good. Readers of this book will be well prepared to participate in the dialogue that will influence the future of public education in this nation – a dialogue that must seek the kind of change that represents hope for all students.

As for the question contained in the title of the book–Can hope audaciously trump neoliberalism?–, Carr and Porfilio develop a framework that integrates the work of the contributors, including Christine Sleeter and Dennis Carlson, who wrote the forward and afterword respectively, that problematizes how the Obama administration has presented an extremely constrained, conservative notion of change in and through education. The rhetoric has not been matched by meaningful, tangible, transformative proposals, policies and programs aimed at transformative change. There are many reasons for this, and, according to the contributors to this book, it is clear that neoliberalism is a major obstacle to stimulating the hope that so many have been hoping for. Addressing systemic inequities embedded within neoliberalism, Carr and Porfilio argue, is key to achieving the hope so brilliantly presented by Obama during the campaign that brought him to the presidency.

TABLE OF CONTENTS
Acknowledgements. Foreword: Challenging the Empire’s Agenda for Education, Christine E. Sleeter. SECTION I: USING HISTORICAL AND THEORETICAL INSIGHTS TO UNDERSTAND OBAMA’S EDUCATIONAL AGENDA. More of the Same: How Free Market-Capitalism Dominates the Economy and Education, David Hursh. Concocting Crises to Create Consent: The Importance of “The Shock Doctrine” to Understanding Current Educational Policy, Virginia Lea. Educational Hope Ignored Under Obama: The Persistent Failure of Crisis Discourse and Utopian Expectations, P. L. Thomas. Competing Definitions of Hope in Obama’s Education Marketplace: Media Representations of School Reform, Equality, and Social Justice, Rebecca A. Goldstein, Sheila Macrine, Nataly Z. Chesky, and Alexandra Perry. SECTION II: THE PERILS OF NEOLIBERAL SCHOOLING: CRITIQUING CORPORATIZED FORMS OF SCHOOLING AND A SOBER ASSESSMENT OF WHERE OBAMA IS TAKING US. Charting a New Course for Public Education Through Charter Schools: Where is Obama Taking Us? Mary Christianakis and Richard Mora. Manufactured Consent: Latino/a Themed Charter Schools, in Whose Interests? Theresa Montaño and Lynne Aoki. Whose Schools are These Anyway—American Dream or Nightmare? Countering the Corporate Takeover of Schools in California, Roberta Ahlquist. Obama, Escucha! Estamos en la Lucha! Challenging Neoliberalism in Los Angeles Schools, Theresa Montaño. Standardized Teacher Performance Assessment: Obama/Duncan’s Quick Fix for What They Think it is That Ails Us, Ann Berlak. The Political Economy of Educational Restructuring: On the Origin of Performance Pay and Obama’s “Blueprint” for Education, Mark Garrison. SECTION III: ENVISIONING NEW SCHOOLS AND A NEW SOCIAL WORLD: STORIES OF RESISTENCE, HOPE, AND TRANSFORMATION. The Education Agenda is a War Agenda: Connecting Reason to Power and Power to Resistance, Rich Gibson and E. Wayne Ross. Connecting Communities and Schools: Accountability in the Post-NCLB Era, Tina Wagle and Paul Theobald. If There is Anyone Out There, Peter McLaren. Afterword: Working the Contradictions: The Obama Administration’s Educational Policy, and Democracy Will Come, Dennis Carlson. Biographies.