This article responds to a conspicuous blind spot in scholarship and commentary on language education policy in the United States. This oversight obtains as much in theoretical terms as in errant readings of the historical record of language education policy and practice. To illuminate this blind spot, I structure the article in four parts. I begin by reviewing the resource debate over language education policy. Second, I contribute to that debate by way of the classical Marxist theory of imperialism and elaborate its social, ideological and linguistic dynamics. Third, I explore this theoretical position by contrasting two key moments in the history of U.S. second language policy and practice. Finally, I maintain that despite the focus on historical contexts, this analysis implicates a fundamental re-orientation of contemporary language education policy scholarship and advocacy if either is to contribute in deed to a more multilingual and just society.

The Historians Against the War Steering Committee has joined the Center for Constitutional Rights, Amnesty International, and other groups in endorsing a statement being prepared for the January 11 ninth anniversary of the establishment of the Guantánamo prison camp. The statement, entitled “Close Guantánamo with Justice Now,” is on-line at http://www.indybay.org/uploads/2010/12/29/guantanamo.pdf. Jeremy Varon of the New School history department is helping to recruit individual signers with academic affiliations (the varied list currently includes Noam Chomsky, Todd Gitlin, and Michael Berube among many others). Anyone wishing to sign can send an e-mail to Jeremy at jvaron@aol.com with name and affiliation. 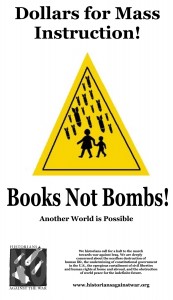 Historians Against the War

Historians Against the War have ratified a new, broader statement of aims that goes beyond criticism of the US wars in Iraq and Afghanistan.

The new statement condemns US imperialism, and importantly, links US military aggression to global capitalism.

As historically minded activists, scholars, students, and teachers, we stand opposed to wars of aggression, military occupations of foreign lands, and imperial efforts by the United States and other powerful nations to dominate the internal life of other countries.

In particular, we continue to demand a speedy end to US military involvement in Iraq, and we insist on the withdrawal, not the expansion, of US and NATO military forces in Afghanistan. We also call for a sharp reduction of US military bases overseas, and an end to US financial and military support of regimes that repress their people, or that occupy the territories of other peoples. We favor as well a drastic redirection of national resources away from military spending and toward urgently needed domestic programs.

We deplore the secrecy, deception, and distortion of history, the repeated violation of international law, and the attack on civil liberties domestically that have accompanied US policies of war and militarism—policies that became especially belligerent in the aftermath of September 11.

We fear that the current, rapidly escalating crisis of global capitalism, which is creating suffering worldwide, will lead to escalating wars abroad and intensifying repression at home. We support solutions to this crisis that seek to enrich the lives and increase the power of people globally, and protect their fundamental human rights. We are unalterably opposed to any attempts to solve the crisis at their expense.

We are aware that, in the words of the late historian William Appleman Williams, “empire as a way of life” has long characterized the United States and is not easily changed. However, we are mindful as well that the current conjunction of international and domestic crises offers an opportunity to alter longstanding destructive patterns. As historians, we believe that we can and must make a contribution to the broad, international movements for peace, democracy, and environmental and social justice. In pursuing our objectives, we look toward building and joining alliances with a wide variety of intellectual and activist groups that share our concerns.

People who are in substantial agreement (broadly defined) with the statement are invited to go to the web site and become members of HAW.