In this article I examine the nexus, the mutually reinforcing connection between neoliberal and neoconservative ideology and social and political forces, and variation between countries such as Britain, the USA and Turkey. This analysis is then applied in particular to neoliberal/ neoconservative education `reform’ in England, focusing on marketisation, high-stakes testing, privatization and pre-privatisation, and the increased surveillance of teachers as a result of new public managerialism in education, as reinforced and enforced by the school inspection system. These effects are then related to the lived work experiences of specific teachers, using their own word. I conclude the article by examining and calling for resistance, for teachers and critical education workers to educate, agitate and organize in various arenas, and to consider the importance of political programme- in particular to consider the utility of the transitional programme as advanced by Trotsky. 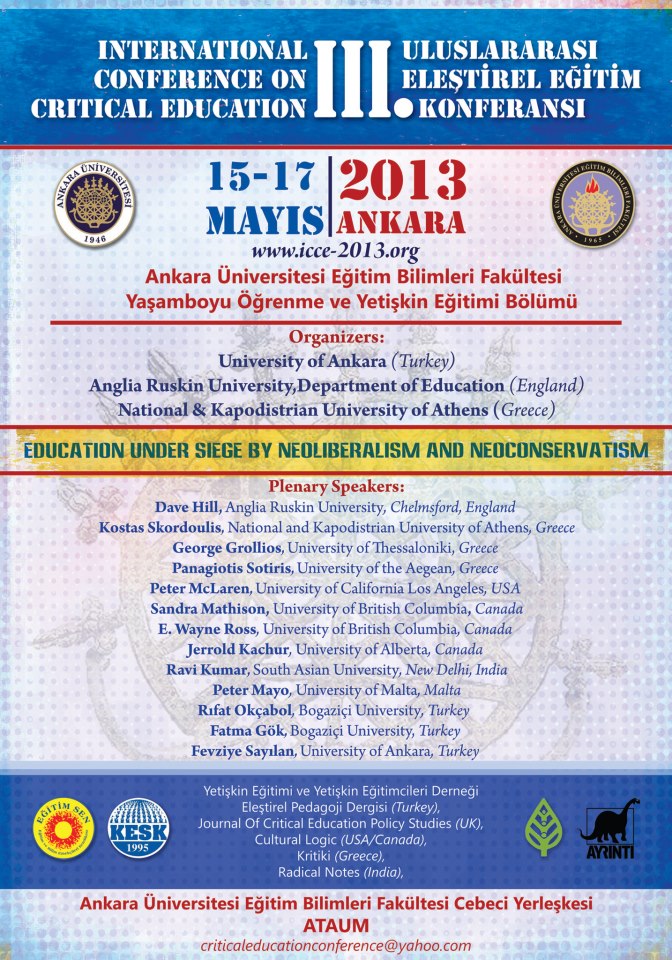 Third Annual Conference on Critical Education
Education Under Siege by Neoliberalism and Neoconservatism
May 15-17, 2013
Ankara,Turkey

Neoliberal and neoconservative educational politics have significantly been damaging education all over the World. Public education is regarded as old fashioned, private schools and a variety of types of education have been presented as an ideal model, schools and the students are now in a more competitive relationship, public education has been losing its status as a social right as a result of relationships with the market, and the state is rapidly losing its social character in the face of these developments. It leads us to rethink education given problems such as the education becoming less democratic, less secular and losing its scientific character; becoming more conservative and capital oriented and becoming less concerned with- in fact- detrimental to- issues of equality and critique. In rethinking education, the critical education movement takes an important role in creating new horizons and strategies against the global attack of the capital.

The International Conference on Critical Education, which was held in Athens for first meetings, provides a base for the academics, teachers and intellectuals who are interested in the subject to come together in order to overcome obstacles for public education. Therefore, in the age where education is under siege by neoliberalism and neoconservatism, we invite you to the IIIrd International Conference on Critical Education to reflect on the theory and practice of critical education and to contribute to the field.
Location: University of Ankara, Faculty of Educational Sciences & ATAUM (Ankara University European Research Center) located on University of Ankara Campus