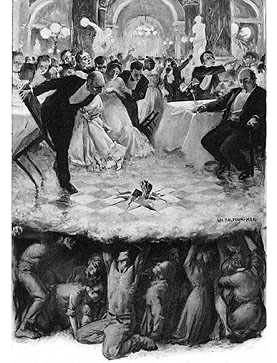 Less than two weeks until the Rouge Forum Conference, May 15-17, in Ypsilanti, Michigan. Join us!

Come meet others whose interest in education goes to society as well. The core issue of our time is rising color-coded inequality met by the possibility of mass, class-conscious, resistance. No education organization in North America has the limited good sense and courage to say that.

The National Education Association will meet in San Diego in July, making sure no NEA member grasps this is not a tea-party but class war. Here we see how NEA pours $2million more into a campaign for a regressive California tax.

United Teachers of LA plan a one day walkout on May 15, but they don’t want to interrupt testing. Huh?
Well, at least this is 1/2 good news. “Union leaders said they chose May 15 “to have the least conflict with monthlong testing,” including the state’s STAR tests, which are the most prominent yardsticks for a school’s academic standing. But there are Advanced Placement tests, which are important for college applicants, scheduled for that day. ”

In a week, Chrysler went under, the Sunnis rose again, the Taliban swept 60 miles from the capital–some week! Primer on Chrysler Bankruptcy.

Who can argue that the government, the capitalist democracy in which the latter always loses, is anything more than executive committee and armed weapon of the rich? How the Banksters “own the place,” in Congress.

We note with sadness the death of WIlliam Pomeroy whose writings on the Huks in the Philippines was terrific. See his book, The Forrest, among others.

“The only worker who is productive is one who produces surplus value for the capitalist, or in other words contributes to the self-valorization of capital. If we may take an example from outside the sphere of material production, a schoolmaster is a productive worker when, in addition to belaboring the heads of his pupils, he works himself into the ground to enrich the owner of the school. That the latter has laid out his capital in a teaching factory, instead of a sausage factory, makes no difference to the relation. The concept of a productive worker therefore implies, not merely a relation between the activity of work and its useful effect, between the worker and the product of the work, but also a specific social relation of production, a relation with a means of valorization. To be a productive worker is therefore not a piece of luck, but a misfortune.” Marx 1977, Capital, Vol 1, translator, B. Fowkes, New York, Vintage, p 644

Good luck to us, every one!