On February 3rd, 2011, author David R. Montgomery spoke to a theatre packed with an interdisciplinary audience about his new book, Dirt: The Erosion of Civilizations.

Montgomery brought together a little history, a little archeology, a little science, and a little sociology, to illustrate how our relationship with soil has evolved.

In the days of Ancient Greece, soil was a mystery, deified as a fertility goddess. It was later viewed as a means to living – as something to be worked, to store chemicals, and to be used as an industrial commodity. Only recently has soil been examined as an ecosystem.

“If we are to sustain life on top we must reinvent life in the bottom,” he said. “We can no longer treat soil like dirt.”

Soil is eroding around the world faster than it is being replaced, Montgomery said, largely due to exploitative agricultural practices that only take into account short term growth. Agriculture that preserves the soil over the long run, such as organic farming, is in contrast called alternative agriculture. 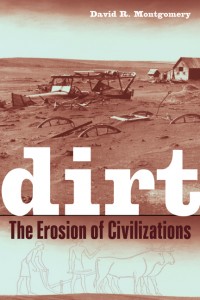 The different lenses with which Montgomery brought his topic to life shows how interdisciplinary the topic of sustainability can be. And this theme could be an excellent starting point for new mixes on campus.

There is great opportunity for professors and students to form partnerships through speakers brought in by UBC Reads Sustainability.

Maybe there is a particular author several professors or students want to hear from and a common assignment could bloom out of it. If people from different disciplines are showing up at the same place to hear the same topic, there’s a chance to jump further into that common conversation and really engage with each other though that common interest.

There are, no doubt, a few sustainable mixes germinating beneath the surface, waiting to be brought to life.