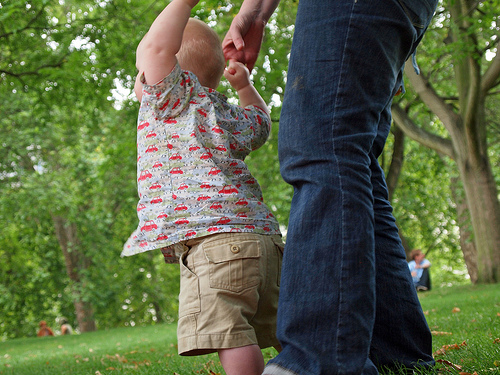 Week 2 of the Rhizomatic Learning course on Peer 2 Peer University is about “enforcing independence.” In the introductory video for this week (found on the previous link), Dave Cormier asks us to consider how we might help students to be able to be responsible for their own learning, including being able to self-assess the quality of their own knowledge and work, and to self-remediate when necessary. This could include recognizing what you do and don’t know, where there are gaps in your knowledge or skills, how to go about filling those, and then actually doing the filling. With these things happening mostly or wholly on the students’ own initiative. Well, I think mostly so when we’re talking about a formal course situation, since in such situations there will always be an element of external forces (the teacher, the mark/grade, e.g.) playing into one’s learning activities.

Dave noted that there is a “primary paradox” in the idea of enforcing independence, which is pretty clear on the surface: how can you force someone to act independently? It seems impossible from the start. Jenny Mackness wrote a blog post this week that addresses this paradox, and suggests that “autonomy” may be a better word than “independence”: partly because many of us don’t necessarily just want students to learn how to learn “on their own” but rather to learn interdependently as well, and partly because some learners will always be dependent on others in some ways (e.g., some with special needs). But also, she notes, the idea of learners being free to decide what they need/want to learn, taking the initiative to do so, and being responsible for the consequences that ensue suggests something closer to autonomy than independence.

I guess that, being a philosopher, one thing I might do here is go into an in-depth discussion of the similarities and differences between the concepts of autonomy and independence. But I’m more interested in other things, so for now let me just say that to me, autonomy signals more of a sense of having one’s choices and actions come from one’s own will, one’s own choices, whether one is also working with others or also dependent on them for support or not. So in that sense, I agree that autonomy may be a better term.

So, is it possible to enforce autonomy? Mackness says no, because as soon as one does so the person is not acting autonomously. I see that, of course, but the issue is pretty complex because we are, one might say, always (or usually?) in situations where there are forces outside of us nudging or pushing or shoving or even forcing us in some direction. Whenever I engage in an autonomous action, from my own will and choices, I’m not doing so in a vacuum, and quite often or possibly always there are conditions outside of me that are shaping my motivation to go in one direction or another. So perhaps it’s a matter of degree: how much external pressure can there be on someone and yet we can still say they’re making autonomous choices?

One of the most autonomous learning environments I have experienced is the open online course, like this one. I choose to engage with the #rhizo14 course, to write blog posts (or not), to comment on others’ posts (or not), to discuss things on one or another form of social media (or not), to stick with the course to the end or to decide to stop partway through. I decide why I’m here and what I want to do and not do. No one is giving me anything in the way of formal credit for this course, and I can probably count on 2-3 fingers how many people at my institution would even have a clue what I’m talking about if I said on my CV I took a course in “rhizomatic learning” (which is actually a pretty big number, when you think about it).

But am I completely autonomous in what I choose to do or not do in this course? Mostly yes, but there are also external pressures, even subtle ones, even ones that no one is trying to exert. I have had some really excellent learning experiences in open online courses before (including ETMOOC and ds106, and the thing is, I felt like I got so much out of those courses in part because I was very actively involved and there was a wonderful, welcoming community who was too. I keep wanting to replicate that, even though right now I don’t have the time to devote to #rhizo14 to really do so. Still, I feel a kind of pressure to do more than I actually have time to do in order to engage more, to try to get that wonderful sense of community and connection I’ve had before. And, to be completely honest, to feel like others are reading what I have to say and finding it interesting enough to continue reading long blog posts and then hopefully leaving a comment is also a motivation for me. And, to be even more completely honest, I also have this sense that there’s a party going on amongst a number of people I really respect and I don’t want to miss out. It’s like being part of a group in a social sense, feeling like one is doing what others one likes and respects are doing.

Now, I wouldn’t say there is a sense of “force” happening in my participation in #rhizo14, but it’s also true that some or all of those motivations come from pressures I would locate outside of me, even though I’ve taken them in as my own motivations. The ones about wanting others to read what I have to say and to feel part of a party with those I respect–those don’t feel to me like part of my choices, like part of me, but rather things that I experience as coming from external sources even though now they are part of my own motivational set.

In a “formal” course

In a more formal learning environment (by which I mean a school or university, or an online course, or a training course, or other environment for which learners get some kind of formal credit), it seems to me that the external pressures are significantly greater just by the nature of the situation. There is some kind of “enforcing” going on just by the teacher/instructor/professor having the power of granting or withholding credit, as well as, sometimes, marks. Some of these situations seem to involve more enforcing than others, only because in primary, middle and some secondary schooling students don’t have a whole lot of choice as to whether or not to be there at all, nor what, exactly, they’ll be studying (I did have some choice among classes in high school, but not as much as in university. Of course, in university there are still required courses). This means that there is a good deal of pressure on students pushing them towards doing certain things in their learning, and some of that is coming from the teacher.

This is all very obvious, of course, only it’s important to point out when we’re thinking about whether it’s possible to enforce autonomy or independence, because it seems to me that any degree of giving students the chance to be autonomous when they’re getting credit and/or marks for their work also has an element of pressure, of force if you will. Yes, I can say students are free to choose to pursue various areas of study in my class, to go their own route with a project, and in that way I’m allowing them more autonomy than if I didn’t give them these choices; but nevertheless, they have to do something, and what they choose to do will be influenced in part by what they think will earn them a good mark or at least allow them to pass the class, or what others students will think (if they have to present their work in front of others). They could, of course, just refuse to do anything and fail, or drop the class, but there’s a good deal of pressure not to do that as well.

When I was thinking about whether there are any ways in which I engage in something like enforced autonomy or independence in my courses I thought of things like asking students to come up with their own essay topics, asking them to blog about what they are reading/what we’re discussing and thereby ensure that everyone has a voice (not just those who speak most often in class), giving them the chance to do a different sort of assignment than a traditional academic essay, requiring them to lead class discussion rather than me, and the like. In each of these cases, though I’m giving them some choice in what they want to talk about/how they want to structure their assignments, there is still a good deal of pressure on them that constrains what they actually choose. How many will choose to do a non-traditional assignment when they aren’t used to how such things might be evaluated and aren’t sure how to do them well (even if I provide a rubric), so the safest route is to do what they already know? How many will give a very non-traditional class presentation and lead discussion with a question that really goes far beyond what I’ve said and emphasized in class? In choosing a topic for a research paper, most will go for what seems already “important” in terms of what we’ve emphasized in class and what is most popular in the secondary literature in that particular philosophical area (which differs from decade to decade and century to century). The fact that I’m giving them a mark makes this even stronger.

My point is that there is always some element of pressure, of nudging of learners by the instructor, by other students, by the social and disciplinary milieu in which their learning takes place. So perhaps the paradox of enforcing autonomy is a matter of degree. At what point do my requirements for my course move from leaving space for autonomy with an acceptable amount of pressure from me and others on what choices are actually going to be made, to exhibiting a problematic amount of force? Perhaps the more space I allow for students to make autonomous choices the better, and yet perhaps even then I’m still, just by the nature of my role and the social situation in which it inheres, doing some “enforcing.”

Enforcing(?) autonomy (#rhizo14) / You're the Teacher by Christina Hendricks is licensed under a Creative Commons Attribution 4.0 CC BY