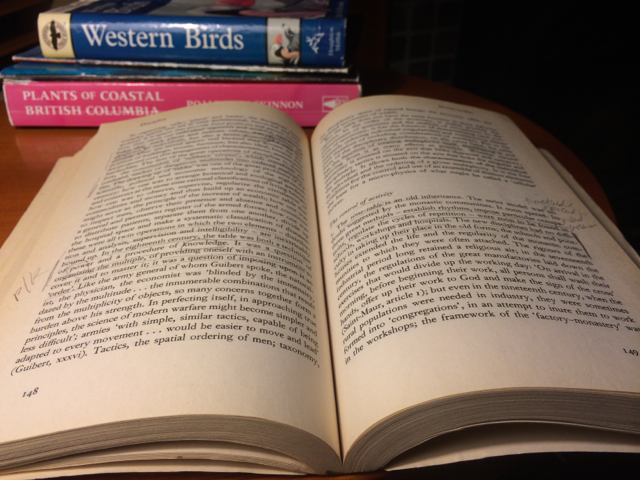 For week four of the P2PU course on “Rhizomatic Learning,” we were prompted to think about whether books are making us stupid. How might it even be possible to consider that they could be?

Dave Cormier explains in his short video introducing the week (available on the previous link). There, he asks us to consider that there is something about print that encourages “objectivity,” “distance,” “remove,” “impartiality” (I didn’t get all his words written down exactly, so I’m just quoting the parts I did write down exactly!). He argues that print tends to move us more towards the definite, the defined, rather than the relational. And he asks us to consider moving more towards orality in learning. This is not to say that books are a problem, but rather that we think about how we learn with books and print in general, and consider both its upsides and downsides.

Here’s a post by Dave that really helped me get my head around what he’s getting at: “Is books making us stupid? Behind the curtain of #rhizo14.” There, he suggests that in moving from orality to print, “We moved from ideas moving towards fluidity to them becoming more truth based,” and he suggests that conversations bring out more complexity while print can lead us to think about things in more simple terms. Here’s the quote from that post that gave me that proverbial light bulb turning on in my head:

The book promotes independence of thought, our ‘own’ ideas and our ‘own’ inferences. It promotes possession. It reifies the things we are reading and makes them a thing that can belong to a person. There is value in this. But there is also a fundamental difference between an idea that I HAVE that I DEFEND against someone else and an ongoing conversation that develops BETWEEN people.

I read this is saying that part of the issue with print is that it encourages us to think of ideas as belonging to their authors. We start to talk in terms of “Foucault’s view,” and “Nietzsche’s view” (I’m currently teaching a course on Nietzsche and Foucault, so they’re on my brain), and try to figure out what their ideas were. Those ideas and arguments become stuck in time, in the same form, for as long as the print exists and people remember it. The ideas are held by a certain person and the arguments are their defense of these ideas, as if the ideas need to stay static. As authors of print works ourselves, we start to think about our “own” ideas and arguments as embodied in the print. Of course, intellectual property and citation requirements in written works add to this sense.

Another part of what I think Dave may be getting at is that in printed works, the “feel” is that ideas are presented with arguments supporting them as if they are to be taken as true, as if there is little conversation to be had because the answer has been given. When we read arguments for positions it can feel like the author is saying: here is what is the case, I’ve backed it up with reasons and evidence, so we really don’t have much to talk about. I don’t know if that’s what Dave means, but I can see how that might be a concern too.

I really liked this opportunity to think this way about print, as it’s something I hadn’t really considered before. Of course, it’s not just print that does this, since video and audio recordings can be part of the same phenomenon. They, too, freeze ideas and arguments in time, can make us think of these as belonging to a particular person who is espousing them. Indeed, Frances Bell says in a recent blog post that she recorded a video for week four of Rhizomatic Learning, thinking it might be less “book-like,” but that the video itself reifies her words and thoughts just as much as text does, and the comments on the video are a conversation but reified in text (they would be in video too). Her point in this thought-provoking post is that both the reified and the participatory are useful, and can intertwine in complex ways (the video and comments were reified, but also constituted a participatory conversation). You can’t have one without the other, as the title of this blog post states (she notes that this comes from the idea of a “duality of participation and reification” from Etienne Wenger’s Communities of Practice).

My first thought on considering this topic was: well, the books I read (philosophy, literature, some educational theory, mostly) do not stay the same over time. Every time I read them, and especially when doing so with students, they change. What they say is not so much a matter of what’s on the page, but how it’s interpreted and understood, and this changes between people and over time in the same person. Further, as others have pointed out, including Jenny Mackness on her blog post on this topic, reading printed works doesn’t preclude having lots of conversations with others about those works.

Later, I also thought: I consider at least some books, especially those that are more open to interpretation, as conversations over long periods of time. Whereas a conversation that takes place simultaneously, or in a short period of time, can only include a few people, a printed work can reach many more over longer periods. Socrates and Nietzsche and Foucault are all still talking to us, and we can converse with them to some degree insofar as we read and react to their works. They cannot respond, though, and so it’s a one-way conversation.

Finally, I thought: do I consider printed works as solidifying or at least stabilizing ideas and arguments in the sense that they are presented, with supporting arguments, as “true” and thus do not invite further conversation? The rhetoric with which some works are written, including philosophical ones, can often seem this way. But I think of offering reasons for claims as actually inviting conversation rather than closing it off. By giving reasons for a view, one is suggesting that the view is potentially debatable; for if it were not, if it were clearly true, no one would take the time to offer an argument for it. So in a way, I think of writing arguments for views as inviting others, from many places and over long periods of time, to engage in a kind of conversation by considering whether those views and arguments are valid, inviting criticism as well as potential agreement. We might even say that printed or recorded works can potentially engage more people in conversation with them than simultaneous conversations can do at any one time, since those who miss out on that conversation can’t participate in it later unless it’s written down or recorded in some way. But once again, the “conversation” one can have with a written or recorded work may be one way only (not a conversation with the author), especially if the author cannot respond (though we can still have a multi-way conversation between various readers!).

Thus I think I’m agreeing with Frances Bell that the relationships between more stable works and the conversations with and around them are complex. First, many of our ideas that we write down or record most likely come from conversations (whether through textual or other media), such as in-person conversations, comments on blogs, responses to journal articles, online meetings, and more. But also, once they’re written down or recorded they can be part of several conversations, perhaps even after we’re gone.

Does any of this address the issue of thinking of ideas as “belonging” to their authors in some deep way? Probably not. Inviting discussion of one’s views and arguments puts them up for contention and change, but by connecting them with a specific author we are likely to still them of them as the view of a particular person. I wonder how much that happens in oral conversations too, though? We do, after all, have ways to “cite” oral communication as well as written. And there are so many social and educational structures built on the need to be able to tie ideas to people that it’s hard to avoid thinking in this way. Which is not to say it’s impossible.

Books, print, recordings & conversations (#rhizo14) / You're the Teacher by Christina Hendricks is licensed under a Creative Commons Attribution 4.0 CC BY