On July 26 I participated in an elearning symposium at the University of Washington-Bothell, virtually, on the invitation of Todd Conaway. There were numerous presenters, many from far and wide, including Alan Levine in Arizona and Viv Rolfe in the UK.

Each of the presenters only had 15 minutes to speak, on something related to the symposium’s theme of “Learning Everywhere.” And since several of us were coming in virtually, we didn’t see the rest of the symposium. Fortunately, Todd did a writeup of the whole day, in a blog post.

I wanted to share here what I said in my 15 minutes, in case it’s useful to others. 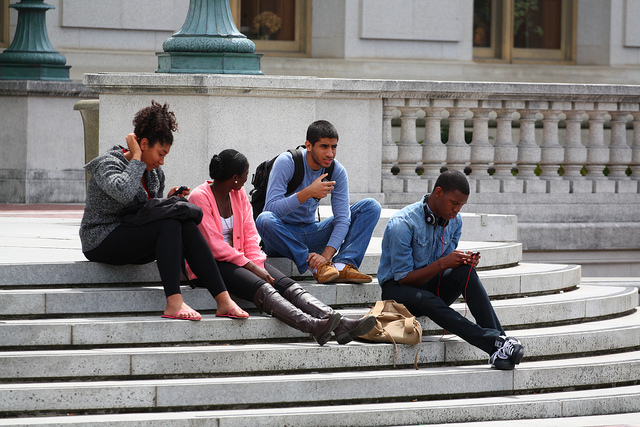 The title and description of my short presentation were:

Teaching & learning on the go: students and faculty

Our students are learning pretty much everywhere: on the bus, at coffee shops, walking around town…. What can we as teachers to do facilitate that learning? And what can we ourselves do on the go in our teaching and learning practice? Christina will provide a few ideas on these questions, and ask for participants to share their thoughts too.

So yeah, that’s what I had planned. But I didn’t get to that last part of people sharing their thoughts too. I finished what I had planned to say with maybe 1 minute left, so there wasn’t time for discussion while I was there. 15 minutes is hard to squish things into, and I probably took on too much for that time slot. But anyway. Here are my thoughts on the two questions above, expanded a bit from what I actually said in the symposium.

What can we do to facilitate students learning on the go?

Or at least, to avoid hindering it.

How are students learning on mobile?

I use my smart phone a lot. Or at least I thought I did, until I realized how much more students in my classes were using them. I use my phone for email, for social media, for maps, for looking up things on the web… but when it comes to doing a deep dive into things I’d consider part of my “work,” I usually switch over to a laptop or a desktop computer. I still feel like there are things (like writing a blog post!) that are much easier for me to do on a computer interface rather than a mobile one.

But a couple of years ago I watched students in a class reading and commenting on their peers’ essays on their phones. These were 1500-2000 word essays–fairly substantial ones that required a lot of scrolling. But rather than lug a laptop around, they preferred to do it on their phones. And they were not terribly pleased when the particular reading/commenting platform didn’t work very well on mobile.

I have witnessed students taking notes during class on their phones. When you think they are doing social media or texting during class, they might be actually taking notes!

And I am told, though I haven’t seen this myself, that students have complained when they are trying to do academic work on their phones on the bus, on the LMS, and their data signal cuts out in certain “dead zones” on the bus routes. This means they lose what they have already put into an assignment–like a discussion board post or a quiz.

I spoke with someone at our teaching and learning centre who said that medical and dental students working in clinics have wanted to access the LMS on mobile while they’re doing this work, to find an article or something else relevant to what they’re doing at the time. So having a good mobile interface was important.

Many students are truly learning everywhere: on the bus, in cafés, sitting outside on campus between classes, on breaks at their workplace…. And it may be more likely they’d use a phone than a tablet or laptop in many of these spaces/places because the phone is with them at all times, and has a data plan (not everyone has a data plan for their tablets).

How can we facilitate this learning?

The first step is one I didn’t really think about carefully until I started working on this presentation. But now it seems obvious: look at your course site on a phone! Honestly, I’ve had course sites on WordPress for years and I think only once or twice have I looked at them on my phone, and only when I needed to look something up really quickly on the go. I haven’t checked for usability on a small screen. For example,

Another thought that came from someone I talked to at our teaching and learning centre: consider whether it’s really necessary to assign students to have long discussion board posts, which are hard to do on mobile. And when the data or wifi cuts out sometimes you lose the whole thing. I can’t tell you how many times I’ve lost comments on blogs when I’ve tried to save them and something has gone wrong and it takes me back to the comment page and my comment is gone. It’s really frustrating, and to the point now where I tend not to give comments if I’m on a phone, unless it’s something short I don’t mind writing again if it’s lost. If it’s pedagogically important for students to write long comments, then okay, but consider whether it is necessary. Maybe they could write more, shorter comments instead, and reply to others?

There are likely many other things to consider, and I’d love to hear your ideas in the comments!

What can instructors do on the go in their teaching and learning practice?

This part got cut pretty short in the presentation, but that’s okay because it’s the part I had the least to say about. Again, I feel like I do most of my work on a laptop or desktop. And while the laptop can be taken practically anywhere, it doesn’t really feel any different to me than a desktop. The OS is the same, the capabilities are the same. I guess having a laptop with me most of the time means I can work pretty much anywhere, anytime, but to me that is a dangerous thing (work creeping into personal life!). Still, here are a couple of thoughts about what mobile learning allows me to do in my own teaching and learning practice.

First, when I think about learning everywhere, one thing I think about is people being in many different places learning together. And I’ve done a lot of that, with online video meetings. I have an online meeting 4-5 times a month, it seems, working with people in various parts of the world on projects, or having conversations with people who are at a conference through something called Virtually Connecting (a way for those who can’t attend a conference to talk to some of those who are there), or just having a conversation about teaching and learning or other things. And of course, there are things like open online courses that bring people from lots of different places together to learn (the courses ETMOOC, Open Education, and DS106 are just some of the ones I’ve taken).

I also think about bringing people from elsewhere into the classroom, virtually. Last Spring, in an interdisciplinary, team-taught course called Arts One, we brought comics artist and visual theorist Nick Sousanis in to give a one-hour guest lecture, virtually. It worked really nicely, even though we were in a terrible room where he could only see about 1/4 of the students at any given time because of the room setup. The elearning symposium at UW-Bothell I was speaking at was another great example–bring in people from various parts of the world to speak at your professional development workshop!

I spoke with someone at our Teaching and Learning Centre who provided another idea for what can change in our teaching when we and students have access to mobile technology. She had spoken with a professor who asked students to take their phones outside (they were actually locked out of a building for a little while for a fire alarm I think) and take photos of something that represents a concept they were discussing in class. This sort of thing could be adapted to many different learning contexts, I think.

Finally, I was trying to think of what I do on mobile that is just actually better done on mobile than on a desktop or laptop, and there are two things:

There are people who do a lot more on mobile than I do. I recently met Amy Burvall, who said she does all her slides and videos on a phone or tablet (if I got that correctly). She does the drawings in drawing apps, puts them together into videos and adds music and voiceovers on mobile apps, creates gifs on mobile apps, etc. I’m not there yet!

Anyone else have ideas on how you teach and learn on the go, with the affordances of mobile technology?

Mobile teaching and learning / You're the Teacher by Christina Hendricks is licensed under a Creative Commons Attribution 4.0 CC BY