I am in the home stretch of creating a new open source walkability dataset I am calling “WalkMap” based on open data obtained from Open Street Map. The key benefit of using the OSM data is it includes all urban walking paths and trails in addition to main roads. I am currently refining the processing model for the Greater Vancouver area and hope to make this data available for all of Canada in the next few months. Currently Walkscore (TM) provides a great user interface but their data are fairly coarse-grained and very expensive to obtain. Therefore, my work is based on a unique 100m processing grid and I am planning to provide both the methodology and outputs via an open source licence.

My goal is to create one primary WalkMap Index, as well as specific measures of the following WalkMap components:

I will also visualized my results on a simple mapping portal with cartography handled by MapBox, another exciting tool I am learning to use:

I have not designed a legend yet, but here is the basic story:

Which route would you prefer?

Here here is another way to look at the same two charts:

Long story short, I support a separated AAA bike route along Cornwall, because it is the most direct and flattest route from downtown and kits to various destinations further east such as Kitsilano and Jericho Beaches and UBC. I think the lost parking on Cornwall is justified by the increased cycling activity. This is also currently the most used cycling route in Kits as shown on the cycling density map below created using data from here:

All that said, any improvement is better then no improvement, so if the City of Vancouver can pass the current proposal 2A as outlined here and then build a seperated route in 4-8 years, that would make me happy too.

Please remember that lots of love and hard work goes into growing food so please do not remove food from a community garden plot without permission from the owner! I am a member of Cypress Community Garden and we were very sad to loose some rhubarb last month. If you would like to learn more about locally grown food, just ask…in my experience most gardeners are happy to talk about their crop and might even be willing to offer you a taste!

Percent that Commute by Bicycle Percent that Commute by Public Transportation What do you notice looking at these maps? Add a comment below…

I am very grateful for having had the opportunity deliver a Pecha Kucha presentation at the British Columbia Society of Landscape Architects Annual Conference called ‘Depth of Field’. My goal for this presentation was to convey my love for maps and my belief that GIS should be utilized more widely in the practice of landscape architecture to analyze multiple scales and layers of context surrounding site-specific work. I illustrated my talk with many maps I created at the Human Early Learning Partnership and other exploratory projects I created out of personal interest. Please post below the video if you have any questions or comments! 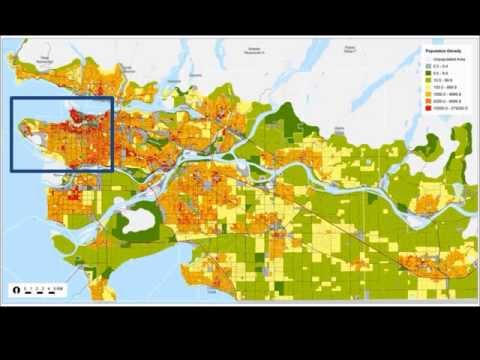 Value of All City of Vancouver Awarded Contracts

Here is a details of all contracts issued by the City of Vancouver in 2012. I downloaded this data from the Vancouver’s Open Data site. There are also additional rows about bids that were not selected and several additional contracts that are conspicuously missing any dollar values. Please zoom in for more detail…

Spatial Disparities and Travel to Abortion Clinics in Canada

——————————————————————————————-
A few years ago I created a package of very interesting maps under contract to the University of Ottawa. The research question was simple: how far do women travel to access abortion services in Canada? The data had been collected using a voluntary survey in partnership with several clinics across the country and each women had recorded home postal code or city name. My job was to match up the origins and destinations, aggregate the data to protect individuals privacy, and analyze the socioeconomic patterns in the data.

These maps have now been published in the Women’s Studies International Forum. Here is one map from the paper. The full paper abstract is below:

Access to abortion services is uneven throughout Canada. As a result, women cross provincial and territorial borders to garner access to abortion services. In this first-time study, the travel women undertake to access abortion services at freestanding clinics across the country was systematically tracked, mapped, and analyzed using questionnaire-based data. A total of 1186 women from 17 freestanding abortion clinics provided information about their journeys. The mapped data reflect the acknowledged importance of the “spatial turn” in the health sciences and provide a graphic illustration of spatial disparities in abortion access in Canada, namely: 1) the paucity of services outside urban centers; 2) the existence of substantial access gaps, particularly for women living in Atlantic, Northern and coastal communities; 3) the burdensome costs of travel and, in some cases, the costs of the abortion procedure itself, especially for younger women who travel the farthest; 4) the unique challenges First Nations and Métis women face in accessing abortion services. Rooming Houses in the DTES of Vancouver

I was reading an article called “Vancouver hotels that house the poor to get $144 million in renovations” and I wanted to know where the properties are located… So I made the following map using Google Fusion Tables. This is a great free way to geocode and display any address information with only a few basic steps. If you have some address data you want mapped, contact me for some tips on using this method : )

I was shocked they are spending this amount of money ($1100 per square foot!) to simply renovate these buildings when they can spend less and rebuild them. However, I definitely understand it is a tough situation as there is nowhere to move the residents if they were to rebuild. I am also happy the heritage value of the properties will be maintained. What do you think they should do with these properties?