My Twitter streams crossed this morning and before I even got to work, a blog post about kids, STEM, learning science, teaching science and rockets was practically spilling out of my head.

It started with a tweet from @physorg_com (h/t to @andrewteacher and @fnoschese) about this column “Don’t show, don’t tell? Trade-off between direct instruction and independent exploration” The researchers gave pre-schoolers a new toy with varying amounts of instruction and then watched what they did with the toy. The kids who were shown how one part of the toy worked could replicate that action, usually, but didn’t find all the other cool stuff the toy did. Kids who didn’t receive explicit instruction figured out much more about the toy. It’s a nice article – have a look if you have minute or two.

The article reminded me of my own experiences with the PhET physics simulations and some research the PhET developers have done (damn, can’t find the ref but I’m sure Wendy would be happy to point you in the right direction). The least effective way to use the sims is to give students a recipe (“Do this. Now click here. Measure this. Now do this. Now this….”) Better but still not terrific is just letting the students play with the sim (“Here’s a cool sim. Play for a while and see what happens.”) The most effective way to use the sims, in their studies anyway, is to give the students a goal or challenge (“Make the light bulb shine the brightest!“)

The ensuing conversation with her and @irasocol reminded me of how I throttled up our UBC Summer Camp bottle rocket activity so it was much more than just something to fill the kids’ time. 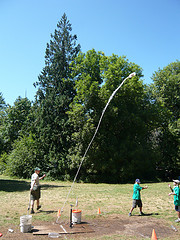 Image by richpt on flicker (CC)

Bottle rockets are a popular activity with kids and families. My friends at the H.R. MacMillan Space Centre run Saturn 5 Saturdays where families bring a 2-litre pop bottle and build and launch their rockets. [Update 30 June: the next Saturn 5 Saturday is July 16, 11am – 2 pm. Thx @AskAnAstronomer] The rockets blast into the air, the kids (or leaders!) get soaked. They chase the rockets as they plummet back to the ground. It’s great fun.

But suppose you have the time, manpower and goal to make the activity educational, not just entertaining.  The recipe method (“Build the rocket like this: fins, nose cone, give it a name, now stand back as I launch it. Wheee!”) is fun, yes, quick, yes. Educational, not so much.  There are two ways we turned our rocket activity into a learning experience:

1. A rocket science experiment: What makes the rocket go highest?

How much water do you put in the rocket? More fuel = higher launch, you’d think. And how much pressure is best? Again, bigger is better, right? We made one set of tokens that read “low pressure”, “medium pressure” and “high pressure”. A second set has “empty”, “1/3 full”, “2/3 full”, “full”. One by one, the rocketeers pick one of each, setting the parameters for their launch.

After the launch, the group will decide if it was  a good one. Once, we tried using inclinometers to measure the maximum height of the rocket but that was waaaay too messy and confusing.  Instead, before they start launching, I ask them for 3 adjectives to describe bad, okay and great rocket launches. The group decides on words like “lame!”, “ok”, and “awesome!” Their rockets, their results, their words.

Then it’s onto to sending the rockets skyward on a ribbon of water.  After each one, we record the result in the matching cell in our results table:

As the Table gets filled in, we start making predictions and then testing them.  It’s pretty funny to watch the full, low pressure rocket. The rocketeer and the rest of the group know what’s going to happen — when you pull the release on the launcher, you hear a tiny “pop” and the rocket falls over. It’s no surprise that the higher the pressure, the higher the rocket goes. But it is surprising that the 1/3 full rockets go the highest. There’s an interesting compromise being having lots of fuel and getting that fuel off the launch pad. The thrill of discovery is pretty cool.

And none of that occurs in the recipe method where the leader takes the rocket from the rocketeer, fills it 1/3 full (we already know that’s the best volume, you see), and then launches it. Don’t tell them the answer. Perhaps, don’t even shepherd them to the solution. Instead, provide them with tools and feedback so they find their own way. (Oh geez, that was the thread on physlrner this morning in response to this interesting “Socrates = Border collie” post.)

After watching that many rocket launches, some kids start to get bored. You’re outside so let them go off and play tag or hide-n-seek for a while. But some rocketeers are aching to launch again. And again. And again. So turn up the challenge.

I usually bring out a box of “stuff”: cardboard, file folders, string, tape, plastic bags, elastics, etc. and tell the kids they can launch again but only after they’ve added a parachute to get their rocket safely back to Earth. They usually form small groups by themselves – two head are better than one. @mrsebiology tweeted back “the parachute option is part of the ‘final exam’ challenge.”

This morning, though, I had a great conversation with @irasocol about this added challenge. Perhaps saying “parachute” gives too much away and directs them too much. Who knows what they might think up — the space shuttle is a glider, right? Ira tweeted 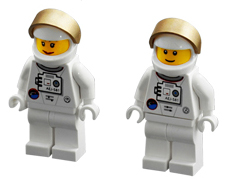 Yes, I--, er, my son, has this amazing Lego space shuttle set.

Which got me thinking, in the real world, we don’t care about the rocket, just the astronauts. The next time I run one of these rocket activities, here’s what I’m going to do: Give each kid a Lego mini-figure and challenge them to get the astronaut safely back to the ground. Capsule with parachute? Sure. Glider strapped to the side of the rocket? You betcha. Another idea I can’t even imagine? Absolutely!

There you have it, some ideas on how to throttle up your bottle rocket activity into an opportunity to engage in science, problem solving, engineering. Oh, it’s still fun. But now, so much more.

Do you have your own ways to send this activity to new heights? Please add a comment and share them with us!

Find me on Twitter @polarisdotca
View all posts by Peter Newbury →
This entry was posted in outreach, teaching and tagged education, kids, science, STEM, twitter. Bookmark the permalink.

3 Responses to Sending bottle rockets to new heights (of learning)