Specifically, the students asked if we might see Abigail Williams, who is easily cast as a villain in the play, in a somehow more sympathetic light. I have to admit that I really didn’t like Abigail when I read the play the first, second or third times (all this term; this is the first time I’ve read the play–or at least, so far as I remember). I thought I’d use this blog post to think through the more nuanced view the students brought up in class. 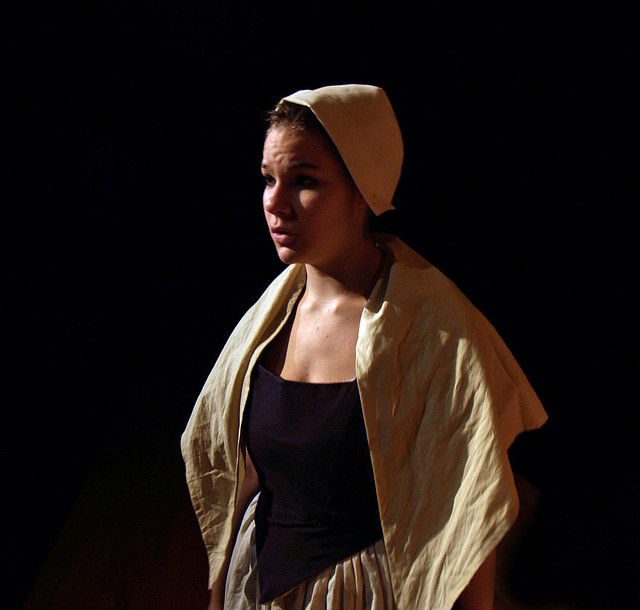 What students brought up in class about Abigail

One student pointed out how the people who end up accusing others in the play are those with very little power. Tituba begins the accusations in Act One, pointing to Sarah Good and Goody Osburn. Then Abigail takes up the thread and names those two, plus one more person. Then Betty speaks and names more. Though, as far as I am aware, there may have been accusations by others in the Salem witch trials, in the play it is only by those with little power: a slave, young girls (several of whom are servants). Can we think of this as a way for these women to gain some degree of power in their society? Does this alter our perception of Abigail or the other girls at all? Does the fact that I may not be doing justice to what the student was asking about, but these are the thoughts I got from her presentation.

Another student on a different seminar day asked something similar as part of a larger set of questions, though this time focused on the title of the play. If a crucible is a vessel in which something is subjected to a great deal of heat and pressure, might we see this being the case for Abigail, and might it be that she responded in a way we can sympathize with? Again, I may have missed the point the student was getting to, exactly, but this is what I remember/what I got out of it.

We had some very interesting discussions on these issues (not as much on the second presentation, as (my fault) I didn’t leave enough time for us to discuss it all together as a group after smaller groups talked about it), with some good points brought up. Among them:

Some of my thoughts after seminars…

The play does, of course, show Proctor’s sexual relationship with Abigail as something to be lamented, but not because of the age difference or power difference, but because he has betrayed his wife and his own sense of himself. Nothing about what it has done to Abigail. In fact, she is a “whore” in Proctor’s eyes (Act 3), and it seems that is how the audience is meant to see her as well. We are to sympathize with Proctor, who has committed a sin against himself and his wife, and we are to see Abigail as a scheming, murdering harlot. Elizabeth Proctor, who seems to be presented quite sympathetically in the play, says of Abigail: “The girl is murder! She must be ripped out of the world!” (Act 2). And, I think, that is the tone we get about Abigail throughout the play.

I do think, now, after seminars and thinking about it further, that though Abigail and Betty and the others reacted very, very badly, if we see the events of the play just from Proctor’s point of view we miss the possible effects of the sexual relationship on Abigail and see her just as a spiteful, cruel, manipulative, delusional teenager. The play even has a deleted Act (included in our version of it as an appendix) in which Proctor and Abigail meet in the woods, and in which we are told, through stage directions, that Proctor “see[s] her madness now.” Perhaps this makes her more sympathetic (she has mental issues rather than being simply cruel and evil), but it does not do justice to thinking about her position as a teenager with little power, in love with an older man, and doing whatever she can to get back what he should never have given her in the first place.

Also, I noticed a pattern of people confessing, or charging others, when they themselves are threatened. In Act One, Abigail feels threatened because Parris has seen more than she realized of what they did in the woods, and she names Tituba as having called the devil. When Hale asks her what she is concealing, and whether she has sold her soul to Lucifer, Abigail turns when Tituba walks in the room and accuses her immediately: “She made me do it! She made Betty do it!” (Act One).

Tituba, for her part, confesses after she hears threats against her person by Parris and Putnam: Parris says he’ll “whip [her] to [her] death,” and Putnam says she “must be hanged!” (Act One). Is it any wonder that Tituba confesses, when threatened in this way? And Proctor himself even notes that such a thing is likely, in Act Two, when talking to Hale: “There are them that will swear to anything before they’ll hang ….”

Then Mary Warren changes her tune in Act Three after being threatened. She was sticking to the story that she never really saw spirits (also probably said because she was threatened by Proctor, actually–see the end of Act Two), and then when Danforth  says “You will confess yourself or you will hang!,” Mary breaks down shortly afterwards and accuses Proctor of forcing her deposition. As she does so, she connects him with the devil, by saying that “He wake me every night, his eyes were like coals and his fingers claw my neck, and I sign, I sign ….”

So might we not say that the girls are acting to protect themselves in the face of threats, of feeling they are vulnerable and about to face very serious accusations or punishments themselves? Does this help us to possibly see Abigail in a more sympathetic light?

I have purposefully argued just the side of saying yes to seeing her sympathetically, ignoring the things in the play that show her in a negative light, to see if I could move over from my initial negative view of her. I think I have. But this is not to say she’s a purely innocent victim in the play, spotless and flawless. This was an exercise in changing my mind. And I’m very glad the students in my seminar gave me the impetus to do it!