Do we get our genes from fish and mushrooms?! 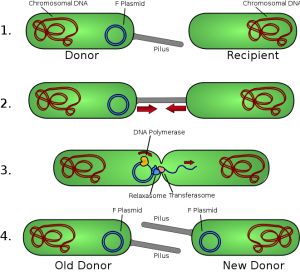 Simple figure of how HGT occurs.

We acquire all our genes from our ancestors, right? Hmmm, maybe not. Recently, came across an article in the news expressing that we may have more than 100 genes from other species. You are probably wondering what the heck I am talking about. When we think of transferring genes, we imagine a family tree with branches pertaining to different members of the family, with a direct transfer of genes from parent to offspring. What we don’t consider at all is Horizontal Gene Transfer. This phenomenon, shortened to HGT, refers to when DNA is transferred between species through bacteria-infected viruses, genes that “jump” around cells and various other methods. The YouTube video below provides a quick summary of HGT with animations.

It is common to see this in action in single-celled organisms such as bacteria, where the foreign genes enter and get embedded in the recipient’s cell. However, recently scientists have found that this process occurs in animal cells as well. In this scientific article, Alastair Crisp and his research team examined HGT in detail in 26 animal species, including primates. Many genes, including the ABO blood group gene, were transferred to humans through other vertebrates. This article discussed more of Crisp’s finding in detail. Crisp and his team inferred that HGT between primates did not happen in the most recent common ancestor of all primates, but way back when our common ancestors were fish. Crisp also identified some genes as emerging from fungi! 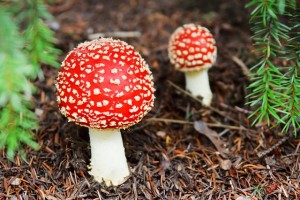 We have genes from mushrooms……

What does this mean for us humans? Are we going to start growing gills like fish, or decomposing dead matter like fungi? This second scientific paper looks at the implications of HGT in evolution. The author, Michael Syvanen, discusses how how the origin of animal cells could be a form of HGT, and that structural genes that are fundamental to everyday life were adapted from genes of prokaryotes.

Don’t worry, we won’t be growing gills anytime soon. That already happened thousands of years ago when we evolved into vertebrates!