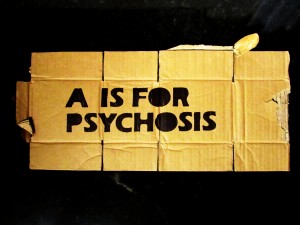 Psychosis is a serious mental disorder, how can we treat it? A is for psychosis. Source: Flickr Common. Credit to: Al Shep

Are the characteristics of dreaming and the characteristics of the psychosis of mental illness similar to some extent? As it turns out, both dreaming and psychosis share many similar cognitive peculiarities, with the most common being a lack of insight into current mental state. With this in mind, neuroscientists are tackling a new approach that could allow psychotic patients to gain insight into their own pathological state. This approach consists of understanding lucid dreaming, a rare phenomenon where the sleeping subject is conscious that he or she is dreaming, thereby gaining insight into their dreaming state. In other words, scientists believe that by understanding how lucid dreamers come to be aware that they are dreaming, they can use this knowledge to teach psychotic patients to gain insight into their illness.

In my opinion, psychosis is one of the most debilitating conditions of all psychiatric disorders as the majority of people suffering from psychosis have no insight into their pathological state. I believe a good way to study this “lack of insight problem” would be to use lucid dreaming as a new therapeutic approach in order to train patients to gain insight into their own mental states. The idea of such a model has already been proposed to study this loss of touch with reality but was wholly speculative, until recently. Indeed, in a recently published paper, researchers examined the activation of neurons in the brains of both lucid dreamers and psychotic patients. Their results showed that the impaired brain regions of the cerebral cortex in psychotic patients who lack insight into their pathological state highly overlap with brain regions activated during lucid dreaming. That being said, if we further study the phenomenon of lucid dreaming, and how lucid dreamers get to be aware of the fact that they are dreaming, we could use this approach as a viable treatment option for those suffering from psychosis and lacking insight into their disorder.

One such treatment approach is metacognitive lucidity training, where subjects are not only trained to develop self-reflective thoughts but also are also trained to develop a conscious understanding of their own mental state. This treatment has been used in a variety of mental disorders, such as phobias and nightmare therapy, where subjects can improve their capability of self-reflecting. By assessing this therapeutic approach to individuals suffering from schizophrenia, or other psychotic disorders, these patients might learn skills that lucid dreamers gave developed in order to gain insight into their state of mind.

One possible limitation with this type of approach, however, is the fact that this phenomenon of lucid dreaming is quite rare. Nonetheless, I still believe that further research on the topic could be a great tool to shed light on the psychotic state present in mental disorders such as schizophrenia. Psychosis is most often characterized by a loss of touch with reality and a lack of insight. Schizophrenia. Source: Flickr Creative Commons. Credit to: Dejenee Shiflet.

If you feel like experiencing a brief simulation of a psychotic episode, watch the video below!