I’ve now been in Edinburgh itself for a few days, and have spent a ridiculous amount of time walking (thanks to the step counter on my phone, I know exactly how much I’ve walked!) and trying to figure out the city.

My residence is nice enough; it’s apparently an old boarding school, so kind of cold inside with lots of echoey hallways, but definitely has more character than I was expecting. It reminds me of the residence I lived in during my second year: shared kitchen/bathrooms within a separated flat of 4 people, each with their own bedroom.

This photo was taken from Edinburgh Castle, where I went on Saturday with my uncle and cousins; the weather was uncharacteristically beautiful, so I couldn’t resist taking a bunch of photos! 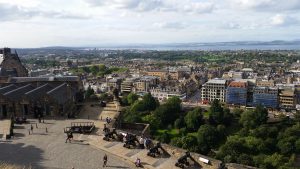 I also went past the elementary school I attended for six months when we lived here (early 2002, right around the time my sister was born). At the time I thought it was really weird that there was no playground (as I was used to at home) but instead a handful of hopscotch boards drawn on the ground, some walled-off rubber areas for playing, and a tire structure that functioned as a climbing frame. All of that stuff is still there, and I had a strange flashback moment when I saw it and suddenly remembered it from 14 years ago; it looks just the same and really brings me back to living and going to school here at age 6!

My residence has a real mix of ages and seems to have a bunch of exchange students, which is nice, but I can’t even tell you how many times I’ve introduced myself to someone, chatted for a few minutes, and felt old. At the age of 20, I’m not even that much older than the ‘freshers,’ but as a fourth year I feel ancient and like I should somehow be a lot more put together and organized than I am. Going on exchange is like first year all over again – everything is new and different, and being well versed in the norm at UBC does me no good here!

Additionally, everyone here does a 4 year degree, whereas at UBC many people take the opportunity to do co-op or exchange and extend their degree to 5 years, as I will have to do. Over here, only third and fourth year grades are actually counted, so the first and second years can think more about being social than being practical about the future; I feel like I can’t afford to do a lackluster job at this point in my degree, so school is kind of a priority! Not that that’s a bad thing necessarily, just a difference between new students and those of us who are nearing graduation.

Despite the beautiful scenery and amazing opportunities, I’ve still had moments of doubt; I think it’s an inherently human reaction to question something so different from what we’re used to.

I think the feelings I’ve been struggling with are best expressed as “am I ______ enough?” Fill in the blank with whatever best expresses the kind of doubt you’re feeling: old, smart, good, mature, independent, strong, intuitive, etcetera. The question can be simplified further by removing the variable – “am I enough?” So simple, and yet I think it’s behind a lot of life’s moments, those when you feel inadequate and incapable.

Over the years I’ve been building a toolkit of resources – this sounds kind of pretentious coming from someone who is only 20, but I believe that learning experiences can come from all kinds of moments. I’ve spent the last three years of my degree teaching myself that I am enough – and that assertion has helped me as I navigate the rocky waters of the beginning of my exchange.

So, if you ever have a moment like this, just remember that you are enough. You are capable, and you have it in you to succeed. (I’ll keep telling myself this for the next few months, anyway!)

As always, I appreciate anyone who’s made it to the end of this long post; it turned into something a little more philosophical than I intended, but I think it’s important to give real thought to crossroad moments like going on exchange!