Designing Engaging Educational Games: An Identification of Emotions for Modeling Pedagogical and Adaptive Emotional Agents: Statement of the Problem

The problem of my study is to identify learners’ emotional states triggered for or during gameplay.  This research will contribute to our understanding of Intelligent Tutoring Systems (ITSs), educational gaming software, and learning.  The goal of this study is to provide critical information needed for emotional design with a focus on exploring and understanding emotions during educational game play.  Understanding emotional responses in human-computer interaction is extremely timely and relevant for teaching and learning in digital environments.

In recent years, ITSs and game-based learning environments have attracted interest as technologies that harness motivation and support learning. Research has focused not only on the cognitive aspects of interaction, but also on affect recognition and response. There is increasing evidence that, in order to design an intelligent and responsive tutor, the learner’s emotions should be properly identified (Conati, Probabilistic Assessment of User’s Emotions in Educational Games, 2002; D’Mello, Taylor, & Graesser, 2007).

My dissertation research builds on my Masters thesis, has been ongoing in various stages for the past three years and is part of a larger project and lab mobilized around How We Learn (Media and Technology Across the Lifespan) within the Department of Curriculum and Pedagogy at UBC.  The HWL lab, funded through various agencies including the Social Sciences and Research Council of Canada (SSHRC), sponsors and supports a range of undergraduate, MA, MEd, and PhD research theses.  My study has been designed and conducted in close collaboration with Dr. Stephen Petrina and the graduate team of
researchers assembled in the HWL. 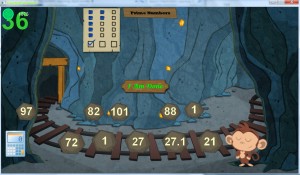 The Heroes of Math Island game employs principles from computer science,  learning, emotion, and game theory.  The game is implemented on an XNA professional gaming platform (a runtime environment provided by Microsoft) that allows for implementation of rich game mechanics and uses heuristics and semiotics from the gaming field: achievements, avatars, characters, levels of difficulty and quests.  The game has a narrative and activities happening
on an island employing as a central site a castle where students get “quests”
from a king or queen.  Similar to Rodrigo et al. (2012), the Heroes of Math Island game has an agent (the monkey) that uses emotional expressions to respond to situations in the game.

This study will provide critical information about emotional design methodologies with a focus on exploring and understanding emotions during educational game play.  Understanding emotional responses in human-computer interaction is extremely timely and relevant for teaching and learning in digital environments.

The game has a mathematical content (students solve 3 activities: divisibility, prime numbers and de-composition); however the focus is on design of technology and on the affective interaction and response.

Experiments were conducted by me and three BCIT students who were knowledgeable with respect to this study and involved in the design and implementation of the game. 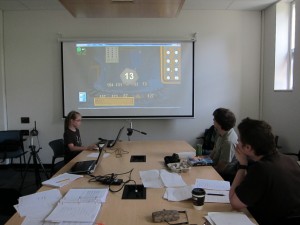