Good Teaching is about Tact, not Interaction or Scaffolding

Pedagogical tact has been a topic of significant international interest in educational discourse since it was initially defined by J.F. Herbart in 1802—specifically as a “quick judgment and decision” able to address “the true requirements of the individual case.” This paper begins by tracing the conceptual roots of pedagogical tact in Kant’s description of “logical tact” from 1789, and brings these into connection with more recent accounts, particularly those that stress importance of reserve, of holding back for the sake of the student’s independence. END_OF_DOCUMENT_TOKEN_TO_BE_REPLACED 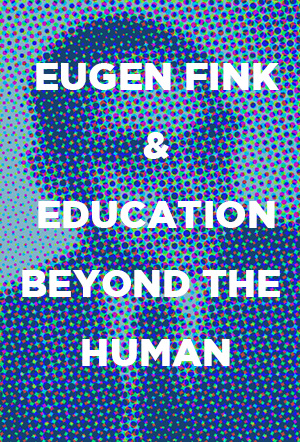 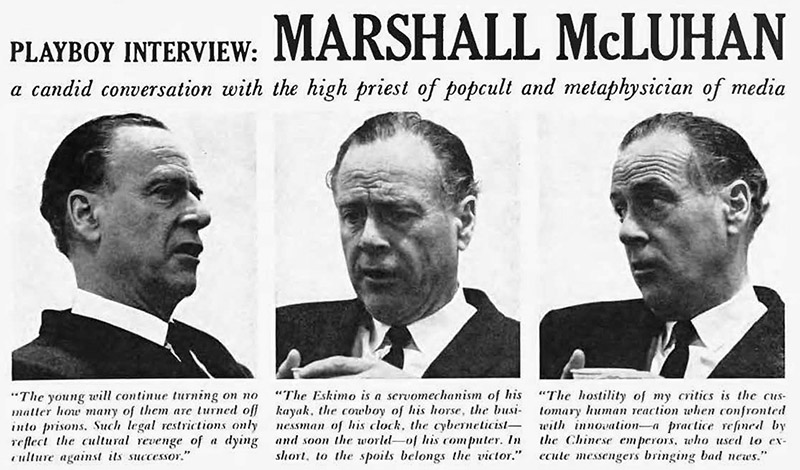 I thought I’d one of the most famous of McLuhan’s texts: His interview with Playboy Magazine from March of 1969. He is at his most exuberant and outspoken throughout, especially in describing his vision of a “new society” of “mythic integration” that will emerge through new electronic media. So here it is with original pagination, even advertising (which McLuhan celebrated as the greatest art of our time–you be the judge).
I’m not sure why this hasn’t been done before, but better late than never!

The Lecture is Dead; Long live the Lecture!

Here’s the abstract for a paper that I’ll be giving in the Philosophical Studies in Education SIG at AERA coming up in April 2017:

The pedagogical relation, the idea of a special relationship between educator and educand, has long been a central theme in interpretive and philosophical studies of education. Broader concern with “student-teacher relations” and “pedagogies of relation” is also common across educational discourses. German educationist Herman Nohl was the first to define the phrase “pedagogical relation” in 1926. Others have followed in his wake, with Max van Manen introducing the concept into English some 65 years later, and Gert Biesta drawing attention to it more recently. Despite ongoing interest, Nohl’s original characterizations have yet to be translated and their subsequent development reviewed. This paper inaugurates this task, while also taking time to hesitate—to point out its problematic moments and challenges.

What is it like to learn? An introduction to “Learning-as-Experience”

Learning-as-experience, learning as it one lives or undergoes it everyday, exposes the Achilles heel of any learning “theory:” Namely, that we have almost no quantifiable, empirical access to learning as a phenomenon, and that the only thing of this kind we can grasp—however tentatively—is the supposed result of it, its “outcomes.” Even with advanced MRI technologies, the moment of learning and the exact way it takes place are unclear: all we know is which parts of the brain are active at which times.  The best teacher, of course, can neither cause nor guarantee the learning of his or her students. Even students can say that they actually “learned something” only after the fact. This notoriously evasive nature of learning remains an open secret among “learning scientists” and other researchers and theorists claiming to have learning as their central focus.

So what does it mean to live or undergo learning?  What is elusive experience of learning actually like? See this paper  (a draft submitted for review) for more.

I’ve been working with my colleague, Karsten Kenklies, on translating Schleiermacher’s 1826 Introductory Lecture on Education (Erziehung). Here’s a couple of key passages from the first, translated half of the lecture, which seeks to provide the “Outlines of the Art of Education and Upbringing (Erziehung)”

Existentialism and Education: An Introduction to Otto Friedrich Bollnow (forthcoming)

About a new book, written by Ralf Koerrenz, forthcoming from Palgrave, edited and co-translated by yours truly:

Otto Friedrich Bollnow, one of the most famous of Martin Heidegger’s students, developed a philosophical approach to education that brought Heidegger’s existentialism together with other theories of what it is to be “human.” The result is an approach to education that is at once accessible but nuanced, general and comprehensive but also concrete and particularistic. This introduction to Bollnow is the first to provide a biographical and thematic overview of his philosophy of education. It begins with a summary of the theoretical influences that Bollnow synthesized, and then outlines Bollnow’s highly original account of experiential “educational reality” –namely, as a reality alternately “harmonious” or “broken,” but fundamentally “guided.” This book will be of value to scholars and students of education and philosophy, especially those interested in bringing larger existential questions into connection with everyday educational engagement. 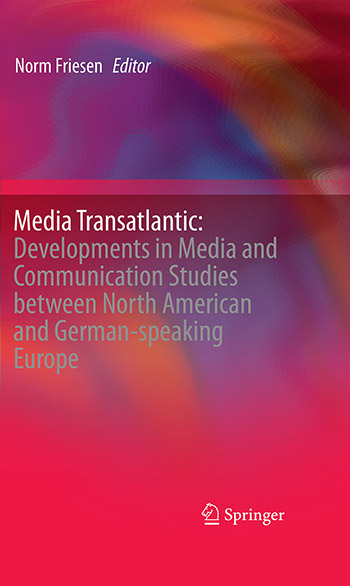 I have a new book out as of the end of May. It’s published by Springer and titled Media Transatlantic: Media and Communication Studies between North American and German-speaking Europe. Here’s the blurb:

This book reflects recent scholarly and theoretical developments in media studies, or Medienwissenschaft. It focuses on linkages between North America and German‐speaking Europe, and brings together and contextualizes contributions from a range of leading scholars. In addition to introducing English‐language readers to some of the most prominent contemporary German media theorists and philosophers, including Claus Pias, Sybille Krämer and Rainer Leschke, the book shows how foundational North American contributions are themselves inspired and informed by continental sources. This book takes Harold Innis or Marshall McLuhan (and other members of the “Toronto School”) as central points of reference, and traces prospective and retrospective lines of influence in a cultural geography that is increasingly global in its scope. In so doing, the book also represents a new episode in the international reception and reinterpretation of the work of Innis and McLuhan, the two founders of the theory and study of media.

Psychology & Neurology are Constructed via Media and “the Social”

Given the socially and technologically contingent nature of symptoms like the “flashback,” neuroscience alone cannot be expected to provide ready answers. This symptomatology of the flashback and its use as a narrative device was developed in the “age of film,” Before this, former soldiers reported seeing ghosts and phantoms. The author argues that we need the humanities, like literature and history, to provide a sense of cultural and historical context to understand whats “going on in our brains.”

Posted in Critical Theory, Media Theory, The Self, Uncategorized | Leave a comment