Every winter for the last 7 years, my Department has put on a science show for the general public, following the tradition celebrated by physicist Michael Faraday (1791-1867). 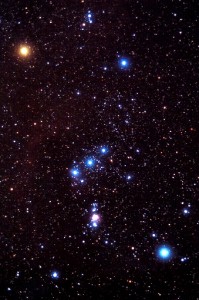 This year’s theme was “The Physics of Light and Colour”. We did demos about lasers, solar power, optical illusions, twinkling stars, this cool Cubee device developed at UBC. For my 10 minutes, I talked about colour and temperature – how we usually portray cold as blue but to astronomers, blue = hot. I encouraged everyone to go home and look for the bright, coloured stars in the constellation Orion.  (I projected Star Walk from my iPad thru the theatre projector to show everyone where to look. Oh my! Fantastic!)

We had an amazing turn-out: nearly 350 people, at least half of them kids!

Before and after the show, I set up a four Galileoscopes on tripods outside the building. Sure, it was to attract people and tell them they were in the right place. But really, it was so I could get a bunch of kids looking through my telescopes. It was the middle of the day so we looked at signs, cars, people, a statue and a Caterpillar excavator. And they were all upside-down! What’s up with that, kids?

When it was over and I had a few quiet moments to take down the telescopes, I thought about the best parts of the afternoon, and came to a new realization about why I do “sidewalk astronomy”. From least to most important:

3. I love looking at stuff through my telescope. I can still remember the first time I saw Saturn’s rings. This is one of those defining moments for many budding astronomers, like watching Neil Armstrong take his one small step is the defining moment for almost every astronaut who’s ever talked about why they became an astronaut.

2. I love helping kids see stuff through my telescope. Typically, kids run up, grab the scope, jam their eyes near the eyepiece. Talk talk talk blab blab squeal. And then the image snaps into focus. “blab blab squ-. . . . . . oooooooh!” I love that moment! (Tip: if you’re aiming at something really bright like the Moon, often you see the image forming on the kid’s cheek and you can gently maneuver their head to get the bright image on their pupil.)

1. This is the new one for me. It was so rewarding talking to the kids’ parents. They’re already interested enough that they’ve brought their kids to your event. If you can get them enthusiastic and excited, they’ll carry on the conversation and discoveries at home. And they’ll be the ones who experience that magical moment when their kids see Saturn for the first time.

Unfortunately, it means I give up the golden moments with the kids — and that’s hard to do because it’s like a drug. But it leverages my enthusiasm and excitement. And knowledge: knowledge of astronomy and knowledge of how to teach astronomy.

Still, here I am, writing about how much I enjoyed talking with the parents. Maybe I’ve found a new drug…

Find me on Twitter @polarisdotca
View all posts by Peter Newbury →
This entry was posted in communicating science, outreach and tagged astronomy, kids, science, stars. Bookmark the permalink.