I know a little bit about the differences between teaching with “blocking” or with “interleaving.” If you were teaching multiplication with blocking, you’d teach the “4 times table”, then the 5x, then the 6x and so on. With interleaving, you’d mix them up so students had to first identify what kind of question this is (“Oh, this is a 4x problem”) and then answer it. There is some nice work in cognitive psychology that shows interleaving leads to better retention.

I use the example of multiplication because that’s just what my 8-year-old was doing yesterday. He had a set of 5x flashcards that he asked me do with him. He didn’t have too much trouble, except for 5×9. As I was running through the cards, I thought of the multiplication table board I’d made a few years earlier when my other kid was learning multiplication. I remember being fascinated by a board like this when I was in Grade 3. 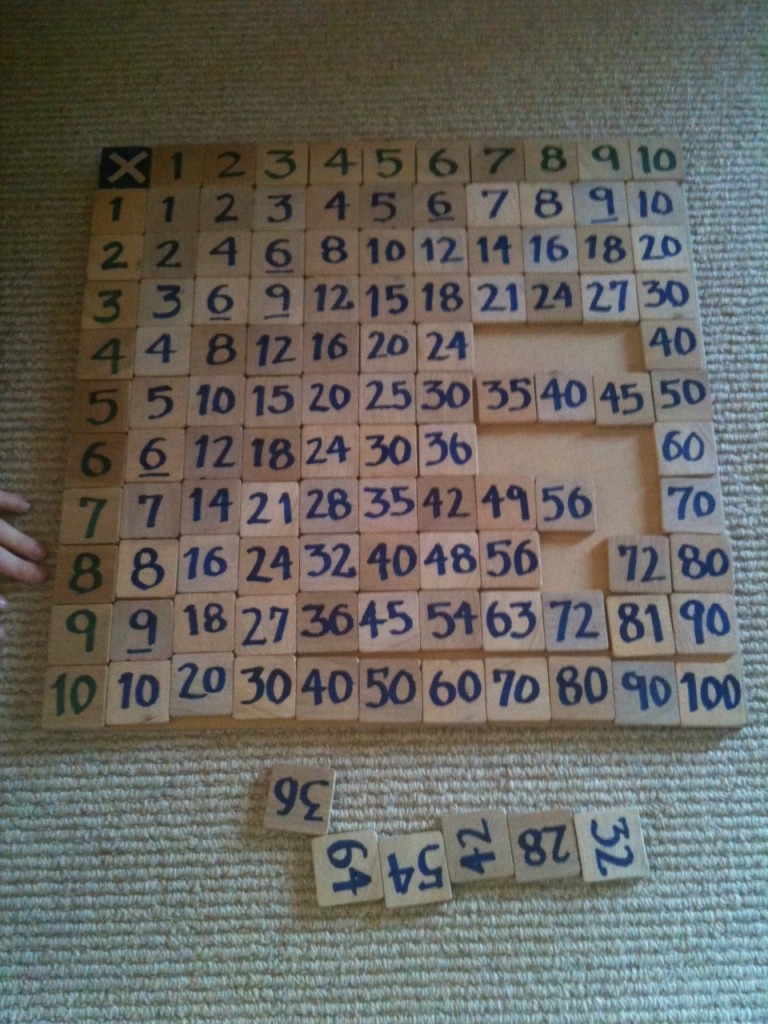 The tiles are from a square hemlock spindle I got at the local hardware store, sliced on my mitre saw, sanded smooth, and then numbered. Green 1-10 tiles are glued across the top and down the left side. You put the blue 24-tile, for example, in the space where the 4 and 6 intersect.

Uh-oh. My goal is to help him learn his times tables, I don’t want to reinforce repeated addition. What’ll he do with 104 x 56 next month?

So I turned the table on him. I started handing him tiles. “Here, where does this one go? How about this one?” That was pretty hard. For me, that is, because I had to quickly find the next tile I wanted in the big pile on the floor and hand it to him by the time he’d placed the current one.

I realize I was asking a different question: “What numbers multiply to give you 24?” is a lot different than, “What is 4 x 6?”. But this new version of the “game” worked nicely. He did some repeated addition in his head, searching for sequence that hit, say, 24. And he occasionally put a tile in the wrong place but I didn’t correct it. He discovered his mistakes as he lay down neighbouring tiles and the patterns were messed up.  It also forced him to estimate where in the empty board to place tiles any without neighbours.

He soon discovered repeated addition works vertically, too, so he could hop down the 4-column to find the 4x tables.

After a few minutes of this, I turned it up another notch (which was possible because there were fewer tiles left in the pile and I could find them faster.) I started handing him stacks of the same tile, for example, 4 40-tiles. “Here, put these down.” I only prompted him once or twice (“Well, if 4 x 10 is 40, what about 10 x 4?”) I was astonished how quickly he picked up the symmetry. “32 goes here at 4 times 8…Oh! And over here at 8 times 4!”

Older sister dropped by to help him with the high tiles – I don’t think my son’s had much practice with the 7x, 8x, 9x tables yet. The two of them finished off the board, fighting (in that friendly brother-sister way, of course) for who gets to put in the last tile.

There are so many patterns to explore on the completed board. We discovered where on the board to find the same tile (symmetric across the diagonal) :

A friend dropped by with a 3-year-old and she asked the toddler to his age. My son helped, helping him find all the 3-tiles. And his 8-tiles. Then my daughter (who’s 11) dropped a little nugget that confirmed this “game” was worthwhile:

I’m sure the math ed people and elementary school teachers can tell me the history of multiplication boards and best practices for using them. But it was so much fun watching my son discover the patterns for himself. And to reinforce that math is something you can play with and — Zoinks! — even have fun with!

If you’ve got the tools and some patience (100 tiles is a LOT of tiles!) I highly recommend you make a set for your kid(s). Do you have any ingenious suggestions for what to use instead of cutting wooden tiles?

Find me on Twitter @polarisdotca
View all posts by Peter Newbury →
This entry was posted in Uncategorized and tagged kids, teaching. Bookmark the permalink.