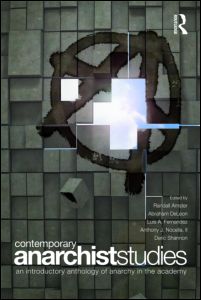 I highly recommend the book and Maly’s review, which frames the book quite well in relation to current issues and debates on education reform. I used parts of Contemporary Anarchist Studies in my curriculum theory seminar this past year and was really pleased by the depth of debate and discussion it stimulated.

Obviously anarchism is gaining some traction among a small, but growing circle of education scholars. As evidenced by this book and several new or recently announced projects including:

Critical Education‘s series on “The Lure of the Animal: Addressing Nonhuman Animals in Educational Theory and Research”, which is edited by Abe DeLeon has published two articles in the past several months, with more in works.

DeLeon is also guest editing a special issue of Educational Studies titled “Anarchism…is a living force with our life…”: Anarchism, Education, and New Possibilities. Download the call for papers here.

And, Robert Haworth (U of Wisconsin, La Crosse) has recently circulated a call for chapter proposals to be included in the book, Anarchist Pedagogies to be published by PM Press

This edited book calls on international scholars (15 single authored or collectively authored chapters) in anarchist studies to critically reflect on historical and contemporary experimentations in anarchist pedagogies. Scholarly efforts will focus on what we have learned from past anarchist experiences and current transformative learning environments — where individuals are engaged in collective, participatory, voluntary and mutual efforts that contest global capitalist structures.

The edited collection responds to the need to reflect on anarchist pedagogies and will highlight three major themes. Authors in the first section will be encouraged to focus on historical discussions surrounding anarchism and education. The authors will give introspective critiques of historical practices, including theories of teaching and learning and alternatives to compulsory public schools. Authors in the second section will construct philosophical and theoretical frameworks evolving from contemporary anarchists, particularly through individuals participating in cooperatives, independent media collectives, infoshops, political zines, open source projects, DIY, direct action networks and other autonomous and cultural spaces.