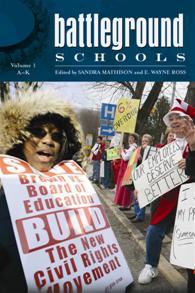 Please pardon this tooting-my-own-horn moment, but I’m very proud that Battleground: Schools, which I co-edited with Sandra Mathison, has won the 2010 Critics Choice Book Award from the American Educational Studies Association.

Battleground: Schools, which is published by Greenwood Press, was truly a collaborative effort as Sandra and I worked with—and learned a great deal from—the 118 contributors who produced 93 essays, which provide historically situated descriptions of the most salient controversies in schooling during the past century. Never before has such a pre-eminent and diverse group of scholarly perspectives been combined in one collection. The authors each have demonstrated through their publications and research their prominence in their particular area. Many are award-winning scholars. Some are practitioners. No single ideology prevails.

The essays are arranged alphabetically by topic. Each essay summarizes the nature of the controversy, including major players and events relevant to the topic. In a number of cases, timelines of critical events are included. And each essay concludes with readings for further investigation of the topic. The volume concludes with a general bibliography of works that address the topics covered.

You can download a PDF of the front matter of the book here, which includes the Contents, Guide to Related Topics, Preface, and Introduction to the book.