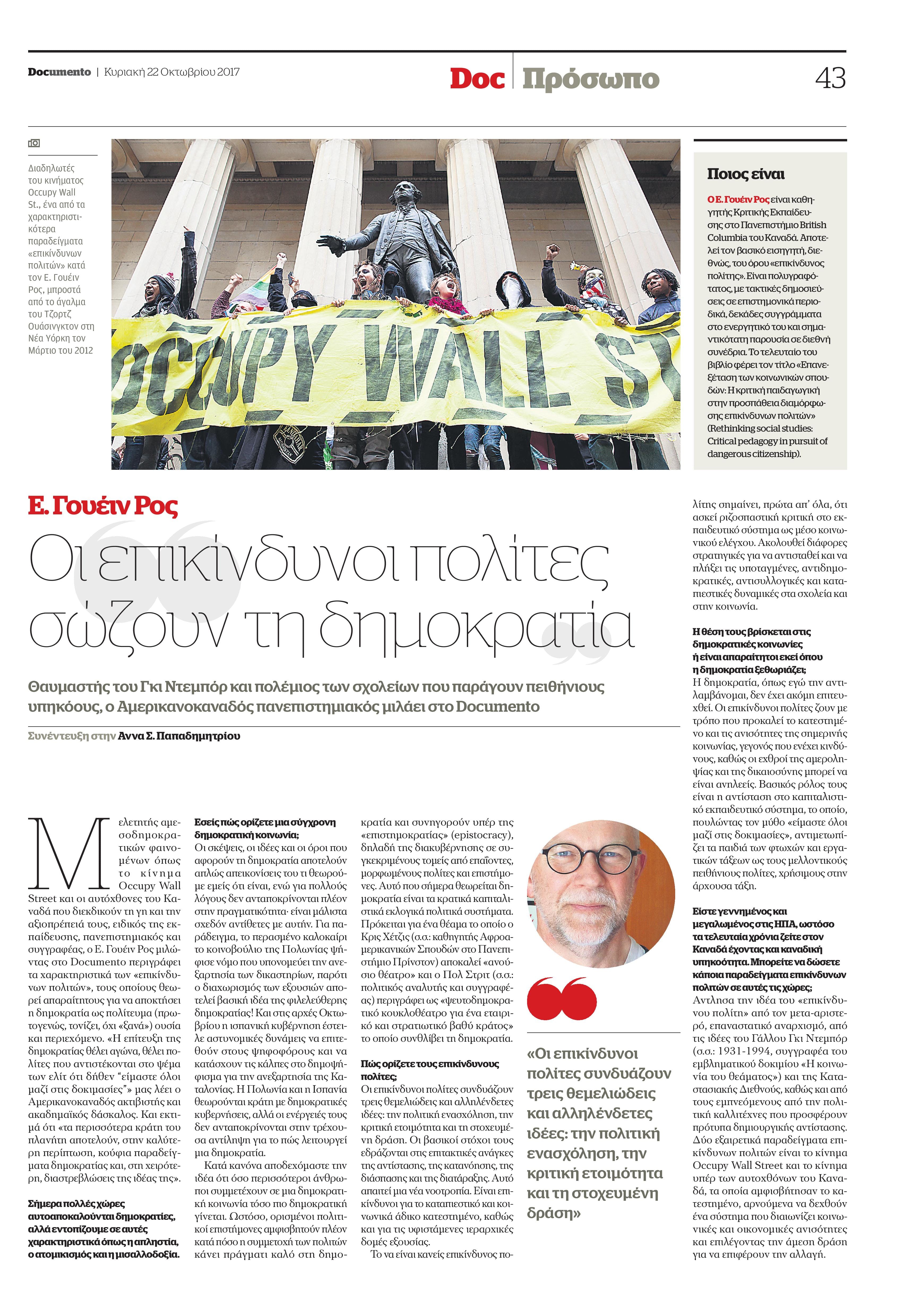 Documento, a newspaper in Athens, Greece, published Anna Papadimitriou’s interview with me on October 22, 2017.  Over the course of the interview we covered a variety of topics including the state of democracy in the world today, the ways in which democracy submits to capitalism and the role of schools in the creation of democratic citizens.

We discussed, in particular, the concept of dangerous citizenship, a notion I developed along with Kevin D. Vinson.

The interview was published in Greek. Below I have posted the unedited version of the interview in English.

Our default for understanding the world is typically to use fixed terms and ideas that we believe correspond to some unchanging reality. The problem is that our language of democracy is static, but the real world is constantly changing. Our thoughts, ideas and terminology about democracy are merely representations of what we think it is and in many ways these ideas no longer correspond to reality, indeed the reality is nearly the opposite.

Here are some examples of what I mean. This past summer Poland’s parliament passed a law undermining the independence of courts, even though separation of powers is a key idea defining liberal democracy. Earlier this month the Spanish government sent police to attack voters and confiscate ballot boxes in the Catalan independence referendum. Poland and Spain are considered democratic governments, but they are not acting in accordance with the typical ideas we hold about how a democracy works. I could add many examples from the United States, Turkey and other so-called democracies.

This is not a new idea. In 1975, the Trilateral Commission published a report, The Crisis of Democracy, which described the problems faced by governments in Europe, U.S. and Japan as stemming from “an excess of democracy” and advocated restoring the power of centralized institutions.

U.S. political scientists Martin Gilens and Benjamin Page produced a major empirical study in 2014 that illustrates that the United States is a functioning oligarchy (which they described as “economic elite domination”). The study concluded that the public has almost no influence over policies the US government adopts, but the central features of democratic governance persist, outwardly.

“by means of ever more effective methods of mind-manipulation, the democracies will change their nature; the quaint old forms—elections, parliaments, Supreme Courts and all the rest—will remain. The underlying substance will be a new kind of non-violent totalitarianism. All the traditional names, all the hallowed slogans will remain exactly what they were in the good old days. Democracy and freedom will be the theme of every broadcast and editorial … Meanwhile the ruling oligarchy and its highly trained elite of soldiers, policemen, thought-manufacturers and mind-manipulators will quietly run the show as they see fit.”

What counts as democracy today, that is state-capitalist electoral politics, is a spectacle, which Chris Hedges calls “meaningless theatre” and Paul Street describes as “fake-democratic ‘marionette theater’ for a corporate and military deep state” that grinds down democracy, if such a thing ever really existed.

If we, here I’m speaking of educators, are truly committed to building a more equitable world we have to re-imagine our roles and find ways to create opportunities for students to construct personally meaningful understandings of the world. What we understand about the world is determined by what the world is, who we are, and how we conduct our inquiries. Education is not about showing life to people, but bringing them to life. The aim is not getting students to listen to convincing lectures by experts, but getting them to speak for themselves in order to achieve, or at least strive for an equal degree of participation and a more democratic, equitable, and just future. This requires a new mindset, something I call dangerous citizenship.

Schools are the primary source of citizenship education and a key site where the state attempts to shape young peoples’ understanding of the world. It is the place where myths of democracy are propagated. Dangerous citizenship is, firstly, a radical critique of schooling as social control. It is also a collection of strategies that might be used to disrupt and resist the conforming, anti-democratic, anti-collective and oppressive potentialities of schools and society.

Dangerous citizenship requires people take on actions and behaviours that bring with them certain necessary dangers; it transcends traditional manoeuvres such as voting and signing petitions, etc. Citizenship from this perspective, is a praxis-inspired mindset of opposition and resistance, an acceptance of a certain strategic and tactical stance. Of course, the implication here is that dangerous citizenship is dangerous to an oppressive and socially unjust status quo, to existing hierarchical structures of power.

We need new pedagogical imaginaries for teaching because traditional conceptions of “democratic” citizenship are bankrupt, perverted by capitalism’s triumph over the interests of the people.

Dangerous citizenship embraces political participation, but not necessarily traditional means. For example, if state-capitalist electoral politics is meaningless theatre, then voting is perhaps not a meaningful or useful way to be politically engaged. Voting can even be seen as non-democratic, particularly when is suppresses minority viewpoints and enhances the beneficiaries in what is essentially an oligarchy or plutocracy.

Secondly, dangerous citizenship is informed by Paulo Freire’s idea of conscientization, that is a consciousness-raising that facilitates the perception and exposure of social and political contradictions. Dangerous citizenship asks how can we achieve that kind of critical awareness and understanding?

Democracy, in this context, is not about electoral politics, but a force that breaks down the barriers that separate people – class, race, national territory – and creates community. The more porous the boundaries of social groups, the more they welcome participation from all individuals, and as the varied groupings enjoy multiple and flexible relations, society moves closer to fulfilling the democratic ideal.

Democracy, as I see it, is something that is yet to be achieved.

The first premise of dangerous citizenship is that democracy does not dominate capital. Capital always trumps democracy – pun intended.

As an unfinished, or never finished project democracy cannot exist in a space where critical social analysis is discouraged. This is a key point for educators to understand. We cannot achieve democracy when curriculum is standardized and regulated. Teachers and curriculum have been subject to ever intensifying policy regimes that attack academic freedom and discourage critical thought. This is happening world-wide and has been taken to extremes, for example, by the Erdoğan government in Turkey.

The primary role of capitalist schooling is social control, most evident in the aims to win children of poor and working classes to be obedient, dutiful and useful to the ruling class under a variety of myths, such as “we are all in this together.” Governments would have us believe that civil disobedience is our problem. But has historian Howard Zinn observed our problem is civil obedience in the face of extreme inequalities that produce poverty and starvation, war and cruelty.

The majority of countries in the world describe themselves as some kind of democracy, a republic or constitutional monarchy. But these are shallow and hollow examples of democracy at best and perversions of the idea of democracy at worst.

Democracy as an associated way of living – where citizens are concerned with the development of shared interests that lead to sensitivity about repercussions of their actions on others and a critical examination of existing social, economic, and political inequalities are at the centre of the endeavour should be our goal. Achieving democracy in this sense is a struggle.

Being a dangerous citizen means living in ways that challenge – are dangerous to the existence of  – the status quo and the many inequities that define our world today and that brings with it inherent dangers because enemies of equity and justice can be ruthless.

My goal has been to challenge teachers to examine examples of creative disruption of everyday as potential sources for new critical pedagogies of resistance to be employed in schools. This is an effort to subvert the traditional aims and methods employed in state-capitalist sponsored schools.

The idea of dangerous citizenship is inspired by my interest in post-left, insurrectionist anarchism (such as Guy Debord and the Situationist International) and politically inspired performance artists who aim to creatively disrupt everyday life. These are models for creative pedagogies of resistance.

For example, the “brandalism” – Situationist inspired détournement of corporate advertising – at the 2015 Paris Climate Talks is a good example of dangerous citizenship. As are the “ethical spectacles” practiced by Greenpeace, Yes Men, and the Clandestine Insurgent Rebel Clown Posse.

Occupy Wall Street, the indigenous Canadian Idle No More movement are, I think, excellent examples of dangerous citizenship, challenging the status quo, refusing to work within a system that perpetuates social and economic inequalities and generally using direct action tactics to achieve change. But I believe the larger civil society movement, where people are organized to express the will of the “third sector” (non-governmental, non-capitalist), also fits in mould, particularly the anti-austerity movement in Greece and Spain (e.g., the Indignant Citizens Movement), which illustrates the double-edged dangers of dangerous citizenship in practice.

In the mid-twentieth century philosopher Paul Taylor argued “we must decide what ought to be the case. We cannot discover what ought to be the case by investigating what is the case.” We—educators and citizens—must decide what kind of world we want to live in. That means asking, in particular, in what sense of democracy do we want this to be a democratic society? We must engage these questions not as merely abstract or rhetorical, but in relation to our lived experiences.