Nothingness. She has been driving for hours on end across this nothingness. When she pulls to the side of the road and turns off the engine, the sun has already begun its red descent into the horizon. She steps out into the dry heat. The stony expanse of the Karoo stretches out for kilometres on end – illusory and timeless, like a de Chirico 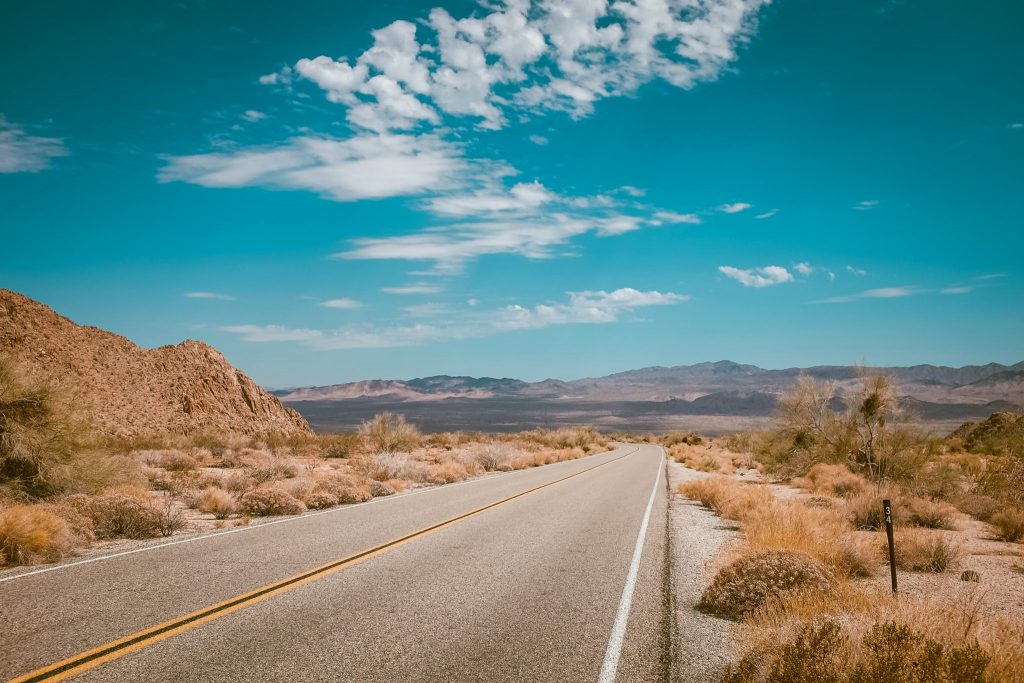 landscape. The stillness is broken only by the hushed breathing of the radiator. She walks away from the vehicle, oblivious to the scratches on her legs as she makes her way through the thorny bushes and the sharp yellow grass. She goes deep into her imaginary canvas, then stops. The sound of her footsteps fades out. There remains only silence. Deep, primordial silence. That’s all she is aching for.

She flinches. She has been sitting on her solitary rock for quite a while now, watching the sky veer into blood orange, and hasn’t heard any footsteps. The initial fright turns quickly into disbelief: that voice! Could it really be him?

She turns and there, a few steps from her, stands the shortest of men – no taller than a metre and a half. His dark olive skin is wrinkled and shrivelled like a walnut shell. Under the visor of a battered baseball cap, she makes out the slants of his eyes and, out of the shade, his slightly restrained, dignified smile.

She jumps up to greet him.

The old Bushman comes up to her with light steps and clasps her hands in his.

“I see you too, Mejuffrou.”

Startled by the dream-like apparition, she briefly looks past Koma, trying to figure out where he may have come from. All she can see is a boundless stretch of bare country.

“Oom, what are you doing here?”

“I visited friends living on a farm over there,” he says pointing to the west with his arm stretched out, the back of his hand facing up.

She is a graduate student spending the summer in Schmidtsdrift. The Army has chosen the nearby military base to relocate the Bushmen soldiers who fought in the frontier wars in Namibia. They have been brought here with their families, away from the public eye. There are about 4,000 of them, making it the largest San community left in Africa, and Zoe got permission to study their customs and way of life. On the very first day of her stay, the Base Captain introduces her to Koma, the !Kung shaman, one of the best trackers in the South African Army.

How old is he? Fifty, sixty? Even he couldn’t tell.

“You might be too old to work on a farm, Oom, but you don’t seem too old to go on foot across the Karoo. When did you leave?”

“Three days ago. It will take me another four days to be back,” he says as if it were the most natural thing in the world.

“Nee. Walking is good. It has taken me back to the lost days, when I was a young hunter.”

As he talks, Koma lets his eyes roam across the landscape.

For a while, they share the stillness of the place, drawn by the same sense of wonder, the same urge of wandering. Eventually, with his gaze still fixed into the horizon, the old shaman says: “Your heart is aching.”

She is taken aback. Startled by the oddness of their encounter, Zoe has momentarily forgotten the cause of her flight. She keeps quiet, looking down at the dust on her boots, forced back into reality. She is trying to answer but something is lodged in her throat.

“The arrows of sorrow hit me hard this time,” she manages to say at last.

Another long spell of silence. Zoe glances at the old man but can make out only his profile in the naked light of the veld.

“At times, we need to be like the weed, which bends in the wind,” Koma eventually says.

She sits back on her rock. There is no point in asking him to elaborate: The old shaman would look away, pretending not to have heard her. Besides, she doesn’t want to plead for clarity. 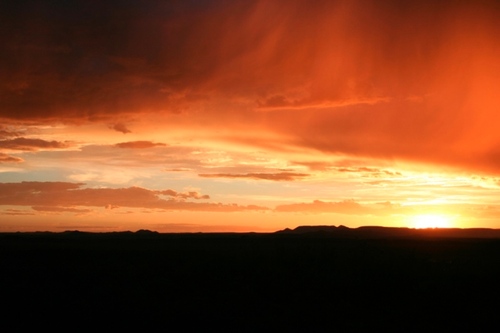 She would rather hush her mind a little longer.

Instinctively, she finds herself following the old man’s gaze, as the sun heads toward its daily death.

After a long while she stands up and walks to the car. She pulls from her backpack three packages of biltong she bought for the trip and takes the bottle of water lying on the passenger seat; then goes back to Koma and hands him the dried meat and the water.

“They will come in handy.”

The old man slips the offerings in his knapsack.

“Oom, how come our paths have crossed here, in the middle of a desert?”

“The magic is in every moment of life, Mejuffrou. I thought you took note of this in the little book you used to carry everywhere.”

Koma clasps her hands, then goes on his way without turning around.

She watches him walk away, a small dark figure against a scarlet backdrop, the pace slow and measured. He is still wearing his old uniform, all patched and worn-out, and a pair of sandals made from truck tires.

“Totsiens, Oom,” she finally says, still feeling the bushman’s dry and nervous strength around her wrists.

She moves towards the car. The light is fast draining from the sky. If she sits tight, she will be in Bloemfontein before dark settles in.