For the first time in probably a year, I’m going back to writing about teaching philosophy here on my blog. I’m on sabbatical July 2012-July 2013, and have been using that time to do work in lots of other areas in relation to teaching and learning, and to take a couple of MOOCs (as you can tell from recent posts). But it’s time to start planning next year’s courses (past time, really), and I found I’m stuck on one of them.

I am teaching Introduction to Philosophy in the Fall, though this one is focused on value theory only (we have a separate intro course for epistemology, metaphysics, & more). In the past I taught it kind of like an ethical theory course, but then realized I was doing the same things in that course as in my 2nd year ethical theory course. I’ve been struggling with what best to do with this course, including just what an Intro course should do. It’s not required for our majors, so we don’t have to do any history of philosophy if we don’t want to…but I do. That’s what I know and love. But it can be really off-putting for people who are just having a taste of philosophy to slog through Plato’s Republic or the like. Still, I love it, so I’m torn.

I think perhaps an Intro course for non-majors should be something that (a) well, introduces the field to students new to it, (b) engages them, and (c) exhibits why philosophy is something anyone might want to continue to do, think about, study, etc. The first one is easy; the other two not so much.

A couple of years ago I focused this course on “happiness,” on what philosophers have said about how to live a happy life (or a good life), and how ethics is part of that for many. It worked okay, but I probably should know more about psychology studies on happiness and include more of that to make it a better course.

This year I thought I’d try something different, but I’m not sure it’s a good idea, and I am a bit stuck in finding things for the course, so I’m asking for help. 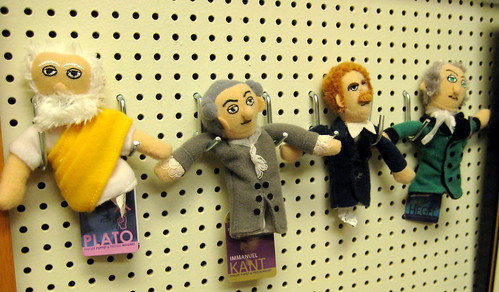 What is philosophy and what can it do for us?

Or some such thing. I’m thinking of introducing philosophy by looking at what philosophers themselves have said about what it is and why it’s valuable. So, for example, there are lots of texts from ancient Greek and Roman philosophers about how philosophy is important for teaching us how to live, how to have a good life–all that philosophy as a way of life stuff that Pierre Hadot talks about (also, What is Ancient Philosophy? from Hadot). I’m really drawn to this idea, in part because I’ve thought about it a fair bit after reading and teaching some of Foucault’s last lectures at the Collège de France (especially Hermeneutics of the Subject, where he focuses on philosophy as a practice of transforming the self).

Sounded like fun to me, at least, and the instructor being excited is at least a very helpful ingredient to a good course.

But the more I thought about it, the more I realized that I don’t have many ideas on readings for this topic beyond the ancients. Who else writes about what philosophy is, what philosophers do, why it’s a good thing (or not), etc?

Possibly Boethius’ Consolation of Philosophy might be good, but I haven’t read it yet so I’m not sure. And I’d have to figure out what to excerpt from it.

And Nietzsche has some choice things to say about philosophers in Twilight of the Idols, among other places.

I think Kant’s “What is Enlightenment?” could fit, as a discussion of the value of reason used in a public sense (which could be philosophers or others). Also his “Conjectural Beginning of Human History” and “Idea for a Universal History from a Cosmopolitan Point of View” as a way to show how a philosophical reading of history might help to spur people towards enlightenment.

Some existentialist texts might be useful for talking about how philosophical thinking might help us deal with despair, or absurdity (e.g., Camus’ Myth of Sisyphus, perhaps?). An existentialist novel or play might be good too, but I’m woefully unfamiliar with those.

There’s Russell, “The Value of Philosophy,” of course. Check. And maybe some of his social/political writings to show philosophy in action beyond the academy.

And along those lines, one could include perhaps some philosopher “public intellectuals” writing about social/political topics, such as Martha Nussbaum and/or Kwame Anthony Appiah.

I think Arendt’s Eichmann in Jerusalem might be good for talking about what happens when people don’t think carefully and evil becomes “banal”–philosophical thinking/discussion might make a difference? But this could be a stretch.

Problem: I don’t want to teach yet another course with only a couple of female philosophers

And yet, that’s where I’m headed in planning so far.

Beyond the above ideas, some of which are better than others, I’m kind of stymied. I spent all day yesterday doing internet searches to try to find what other philosophers have said about their field and its value/what good we do, but came up fairly empty-handed.

So I’m asking anyone who cares to read this: do you have any ideas of other philosophers/readings for this topic, particularly any by women? And remember, things more in the line of value theory than not are best.

Or, does this just seem like a bad idea? And if so, why? I would appreciate constructive criticism if you have any.

I got some good suggestions via Twitter that I thought I’d include here, partly for my future reference but also in case anyone else is interested. Twitter is fantastic–I send out questions, and I invariably get answers/advice/suggestions quickly! Thanks to @ctokelly, @phaedrustweets, @muzrobertson, @philizopher

An article by Samantha Vice on white shame in S. Africa, and the media coverage afterwards:
–original article: “How do I live in this strange place?” (J. of Social Philosophy)
— some reactions in the media, from the Mail & Guardian (S. Africa)

An Intro to Philosophy course on…philosophy (help, please) / You're the Teacher by Christina Hendricks is licensed under a Creative Commons Attribution 4.0 CC BY