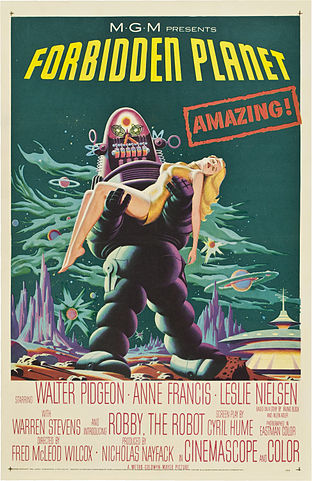 For Arts One last week we read Shakespeare’s The Tempest and also watched Forbidden Planet, which is clearly based in part on Shakespeare’s play. I had never seen that 1956 film before, so the mystery and the big reveal at the end were a surprise for me. Then I started wondering just whether or not it could make sense to give a psychological reading to Shakespeare’s original. Here is what I managed to come up with before class last Friday, but we didn’t have time to talk about it in class. Mostly what I have are some suggestive thoughts and then questions!

The ocean and the storm, and Prospero’s art as connected to mental confusion and madness

This one is pretty easy to see from Prospero and Ariel’s conversation right after the storm. Prospero asks Ariel: “Who was so firm, so constant, that his coil/ Would not infect his reason”? Ariel: “Not a soul/ But felt a fever of the mad, and played/ Some tricks of desperation. All but mariners/ Plunged in the foaming brine and quit the vessel” (1.2.206-211). And of course, after they jump into the sea is when they end up on the island, confused by Prospero’s magic and illusions.

Then Ariel, when he appears as a harpy to Alonso, Sebastian and Antonio, says, “I have made you mad; / And even with such-like valour men hang and drown / Their proper selves” (3.3.57-59), thereby connecting drowning to madness.

Prospero’s art clearly makes people confused, provides illusions, clouds their reason. After the harpy scene with Ariel, Prospero says, “And these, mine enemies, are all knit up/ In their distractions. They are now in my power; / And in these fits I leave them …” (3.3.89-91). And when he breaks the charm over them: “their rising senses/ Begin to chase the ignorant fumes that mantle/ Their clearer reason” (5.1.66-68).

Gonzalo suggests that the madness that holds Alonso, Sebastian and Antonio is caused by their guilt, suggesting that we might be able to read Prospero’s art, at least to some extent, as a kind of psychological phenomenon happening within the minds of the characters: “All three of them are desperate: their great guilt,/ Like poison given to work a great time after,/ Now ‘gins to bite the spirits.” (3.3.104-106). If we were to go with this, though, what kind of interpretation could we give to the storm, if it were somehow in the minds of the king, his son, and the nobles on the boat? Would we have to say it’s in the minds of the mariners as well?

And what about Caliban’s experience of Prospero’s magic? He mostly seems to get pains from it. If we were to do a psychological reading of the play, could these be representative of some kind of pain in his own mind? I’m not sure it makes sense to think that Caliban might have guilt like the king and nobles, but he is clearly mentally pained by Prospero as well as physically.

The psychological interpretation of the events of the play in the film is that the unconscious mind of Dr. Morbius (the Prospero character) has been able, through advanced technology from an alien civilization, to instantiate a monster in physical reality. He is not aware that he is doing it (of course! it’s unconscious), and much of the film is dedicated to trying to figure out what this monster is and how to stop it.

Dr. Morbius, like Prospero, has a great desire for knowledge. Dr. Morbius’ knowledge, along with the technology he gets from the Krell, is able to create physical manifestations of what one has in one’s mind; can Prospero do the same? In a way, yes, because he can make what he thinks of become a reality through his magic and with the help of Ariel, but I’m not sure it’s best described as physical manifestations, since it seems mostly visual and auditory illusions.

Too much knowledge, or too heavy a focus on gaining knowledge, is portrayed as dangerous in both works. It leads Dr. Morbius to unknowingly kill the other members of the crew of the Bellerophon (Bellerophon, by the way, is a mythological hero of ancient Greece who, among other things was famous for killing the Chimera–a beast with a lion’s head, a goal’s body, and a serpent’s tail. The monster in the film has a lion’s head, but I can’t recall the rest of what it looks like!), and the Krell machine kills the doctor from the ship. In the play, of course, it leads Prospero to neglect his rule. The captain of the ship in the film doesn’t rank very high on the knowledge scale, according to the Krell machine, but he is still a very effective leader as portrayed in the film. The same might be said for political rule: it’s more important to have practical and leadership skills than more abstract knowledge.

The other problem with what Dr. Morbius is doing is what killed the Krell as well: trying to become so intelligent, so moral, so peaceful that one forgets the dark side of the human psyche, which will nevertheless not disappear no matter how much one tries. What does Dr. Morbius’ unconscious mind want? To stay on the planet when the rest of his ship wants to leave (his monster destroys them when they argue for leaving and try to leave), presumably out of a thirst for knowledge; also, he wants Miranda to not be with another man (his monster starts killing people after Miranda kisses the first man from the ship, and it gets worse after she falls in love with the Captain).

Can we read Shakespeare’s play through the lens of thinking that Prospero’s unconscious might play a role in what his happening, somehow?

We could see Caliban as the “monster of the Id,” the representation of desires that, in someone whose reason and moral sense are in charge, are repressed (e.g., his attempted rape, his desire for drink, his desire for power?).  And Prospero does acknowledge Caliban as his own: “This thing of darkness I/ Acknowledge mine” (5.1.274-275). If we read Caliban as representing Prospero’s repressed desires, then…yikes…attempted rape of Miranda? That does seem to be along the lines of what the film suggests, with Dr. Morbius being so upset when Miranda falls in love with the Captain.

We might also read the scene where Prospero suddenly remembers the plot against his life by Caliban, Stephano and Trinculo as his unconscious suddenly coming to the fore, coming through when he had tried to repress it (4.1.139). Caliban’s plot could represent Prospero’s own desire for power and his willingness to even kill to get it. Vicente mentioned in class on Wednesday that he thought Prospero might have meant to kill Alonso, Sebastian and Antonio, and I said I hadn’t gotten that, but there is a suggestion in the play that he might have had this in mind. In 5.1, Ariel says that if he were human, he would be touched with pity at the sight of those three, and Gonzalo weeping over them, and Prospero responds by saying that if Ariel can feel a touch of pity, how much more should Prospero himself. So he says, “Though with their high wrongs I am struck to th’ quick,/ Yet with my nobler reason ‘gainst my fury/ Do I take part. The rarer action is/ In virtue than in vengeace” (5.1.25-28). He gets a hold of himself, controls his passions, and after this releases the three from their spell. And this all right after he and Ariel have stopped Caliban’s plot!

That’s all I have the time write about right now, but I’d be curious to hear what others think of these suggestions…

Forbidden Island (The Tempest and Forbidden Planet) / You're the Teacher by Christina Hendricks is licensed under a Creative Commons Attribution 4.0 CC BY