I am participating in Mid-Year Festival 2022, a set of professional development workshops, events, and asynchronous activities run by Equity Unbound and facilitated by many different people around the world. One of the sessions in August is “Dreaming Higher Education Futures,” in which participants take time to vision, re-vision, and dream what higher education could be like in the future. Between the two synchronous sessions, participants are invited to create artifacts to explain their visions.

I struggle with articulating a clear vision, though I do have thoughts on what I’d like to see more of in the future (e.g., more equitable access, decolonization, anti-racism, flexibility of approaches and teaching modalities, more focus on care and wellbeing…). Instead of designing a dream of the future, I ended up focusing on the barriers I struggle with when I think about large-scale change. And I took a few photos on a weekend long walk to illustrate.

When I think about radical change in higher education, I often get a bit stuck by realizing how hard it is because of so many interconnecting structural systems. It’s difficult to change thing A because things B, C, D, E, etc. are tied to that and limiting/upholding limits on what can be done in A.

For example, I recognize that workload, stress, and burnout are significant problems for many people at the institution. Addressing that can be challenging because it’s tied into financial issues (can there be more people hired?), institutional expectations that increased during the pandemic and don’t seem to be abating, as well as a general culture of accepting that more and more work just is part of what we have to do (those who would push against that find themselves wondering if it means they might be viewed as less valuable). Many of these are not specific only to post-secondary contexts, of course. But they seem to be bigger issues that make it hard to address the problem without addressing many others.

As I was taking a walk this weekend I was thinking about how to visualize this situation, and one idea is to consider it like rocks in a wall: 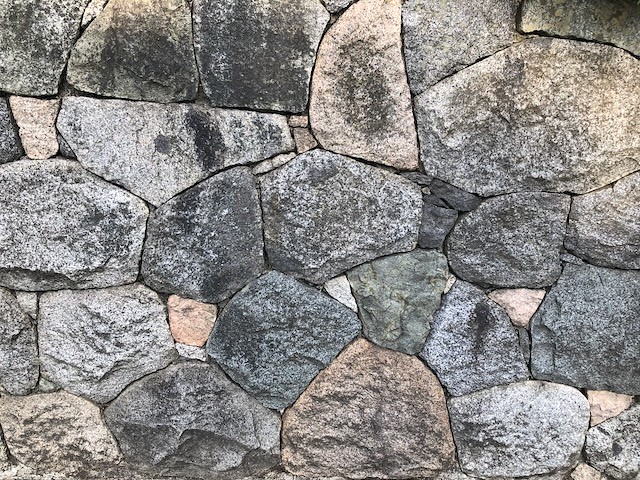 It feels difficult to really change each one because all the others are pushing in around it. How can you change one thing without altering all the others? It feels “stuck.” 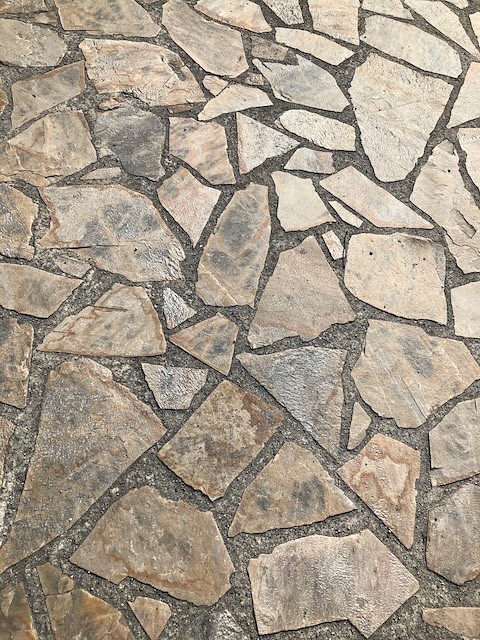 Sometimes it can seem like there’s a bit of wiggle room at least, such as here, where one might be able to expand some of the rocks in the spaces between them and the others. But there is still a limit if one doesn’t change other other rocks; there could be some squishiness between, but then you hit rigidity again.

I don’t have a photo for this one, but another sense one can have is that there could be some changes, but the movement is elastic, like a rubber band–one can expand outward, or change shape somewhat, but it’s temporary and eventually things get pulled back into their original shape, their usual grooves. For example, I think this is how many folks may be feeling as we went through changes in teaching and learning during Covid-19, and while some changes from those may be continued, in many other respects we are pulling back into the “way things used to be” even if in some cases more radical changes would have been better if we had worked harder to ensure they could happen. 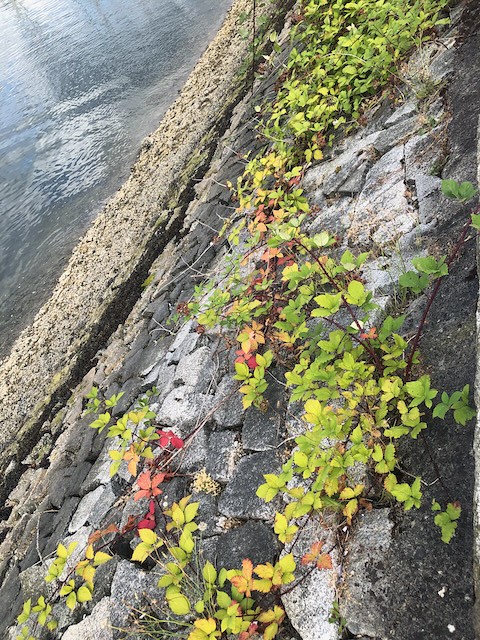 I also found signs of hope, though, on my walk. Plants have an amazing ability to push around and through what may seem like impermeable barriers and attempts to keep them away.

When systems seem stuck and blocked by deep structural interconnections that appear hard to change by pushing outward, sometimes it takes movement in a different direction–in this case, upwards and downwards through the stems, leaves, and roots of plants pushing their way through walls of stones in a seawall. If movement seems really hard, perhaps one way to think about it is to not stay within the usual confines of systems but to move in a different direction/dimension. Work underneath or around in unusual ways. It may not make sense at first, and one may not be sure what the results could be, but perhaps this will lead to movement of the stones themselves. Sometimes, it may 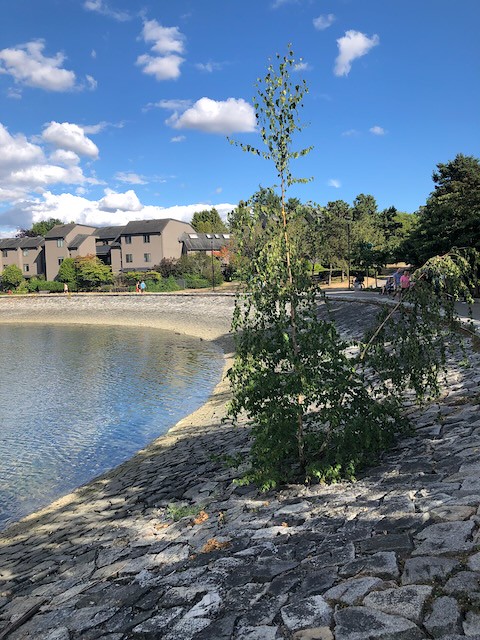 Sometimes, it may even be possible to grow whole trees out of the floors and walls, reaching far above and below.

What could be the result? Eventually, the boulders may become more moveable, jumbled, no longer stuck in the same places, more malleable. And by being closely connected together, this could be an advantage to change–by changing one or a few, those nearby may have to change, causing ripples outwards and loosening what was stuck in place.

Though they may be, at first, still stuck in a larger structure that keeps them from bursting out into something new. 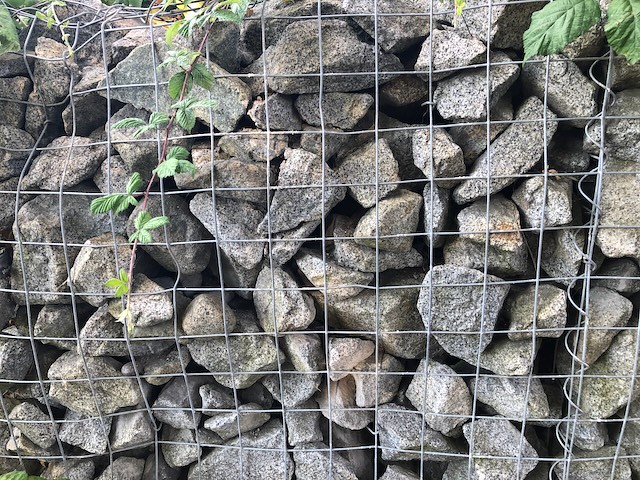 But even those wire cages may not last, and in the end the boulders may roam more freely, able to be moved and shaped into new configurations. 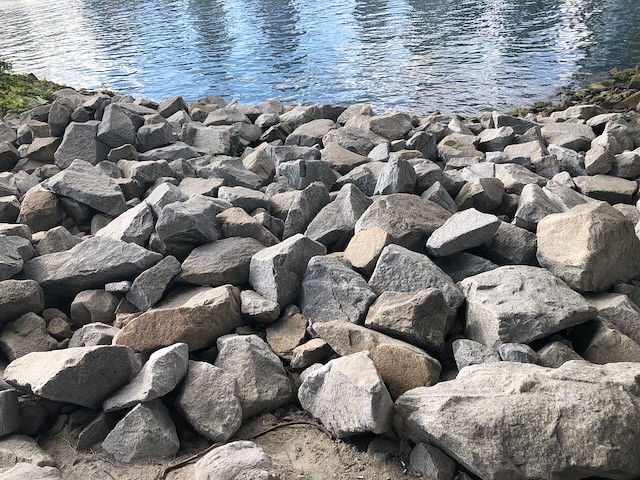 This is as far as I’ve gotten so far–I’ve managed to free the stones but haven’t begun building with them.

Yet, one of the resources shared during the first Dreaming Higher Ed Futures session has really resonated with me–Radical Tenderness cards created by the Gesturing Towards Decolonial Futures Collective, an arts/research/teaching/practice group including people from UBC, a group I didn’t know about until now.

The cards are invitations to approach modernity and decolonization in ways that invite the death of the old and movement towards something new:

Radical tenderness is an invitation for us to learn to hospice modernity/coloniality dying within and around us, and to be taught by these deaths. Through learning from the gifts, harms and limits of the modern/colonial politics, radical tenderness also invites us to assist with the birth of a grammar of politics OTHERWISE, without suffocating the newborn with blankets of projections and idealizations.

Some that are resonating with me as I think about higher ed futures include:

One of the things that I have felt significantly challenged by over the last couple of years is a sense of uncertainty–we are going through quite a lot of change; what will the future be like? What will develop out of what we are working through now? How can I get back to a sense of stability?

I’m trying to learn to appreciate the opportunity that change an uncertainty bring, without being exactly sure what will come next. I am starting by recognizing that boulders can be moved, which helps get me unstuck enough to have space to dream about what else we might build with them.

This is one step along the journey. I’m looking forward to learning from and with others who are also dreaming!

Moving boulders: Dreaming higher education futures with MYFest22 / You're the Teacher by Christina Hendricks is licensed under a Creative Commons Attribution 4.0 CC BY