In Arts One last week we were discussing several graphic works, including selections from Nick Sousanis’ Unflattening, Scott McCloud’s Understanding Comics, and also the whole of Alison Bechdel’s Fun Home.

We were very lucky to have a distance lecture/discussion by Nick Sousanis through live stream from San Francisco on Monday, March 20! He spoke about various themes in Unflattening and his work generally, and talked with quite a few students about their questions. He’s also visiting UBC April 6 and 7, which I’m very excited about. 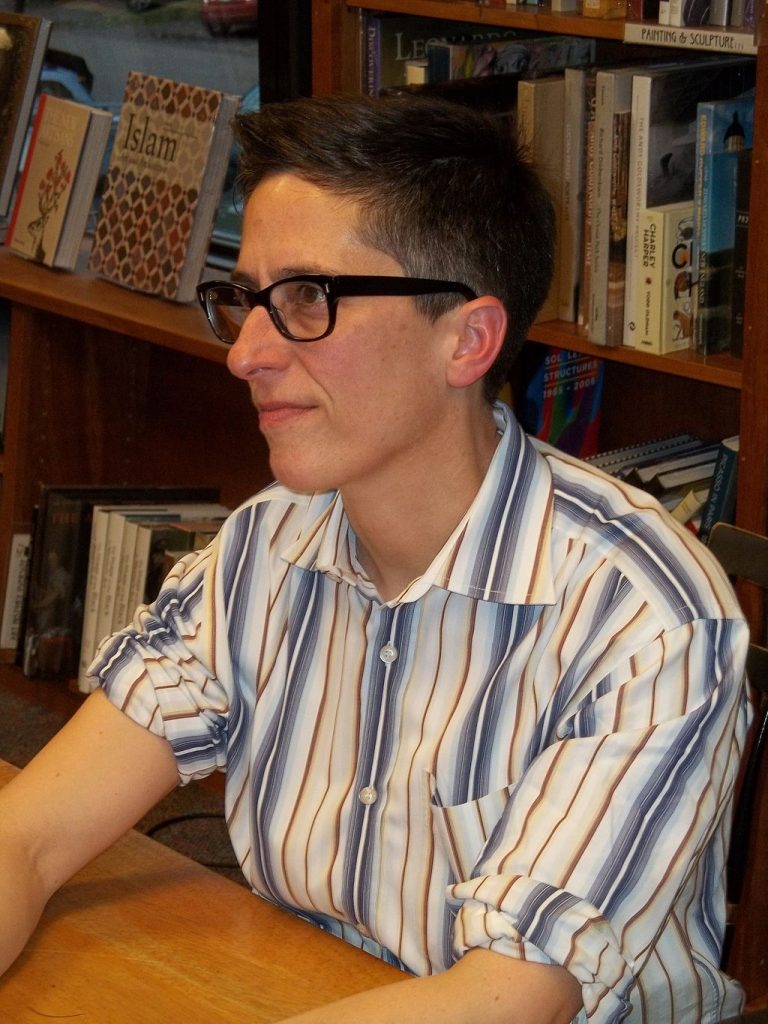 In class on Friday, March 24, 2017, I asked my seminar group about the beginning and end of Bechdel’s Fun Home:

What, in your view, could be the significance of starting with images of “airplane” in the first 2 pages, then ending with Alison jumping off the diving board in the last 2 pages? Considering what happens in between…

I had noticed that there are references to flying, falling, and Icarus in both places, and I wondered what students might make of that.

In the first two pages Alison is playing “airplane” as a young-ish child, being supported in the air by her father’s feet as he lies on his back. She ends up falling on the floor. The narration talks about Icarus and says that it wasn’t she but her father who fell into the sea.

In the last two pages she is jumping off a diving board and he is in the pool with his hands out as if he is about to catch her. She is in mid-air in the image, so we don’t know if he actually does catch her. In the text, though, she says:

in the tricky reverse narration that impels our entwined stories, he was there to catch me when I leapt. (232)

Here are some of the interpretations students in my class had (reworded, and similar ideas brought together under similar themes).

A number of people pointed to how both sets of images are related to being supported and to trust. One said that this shows that even though the family seemed cold and distant, there is still a “thread of love” and that it what Alison searches for in the novel.

It is important that these bookend the novel, in that quite a bit happens in between. We talked in class, and some students mentioned in what they wrote down, that we can see a change in Alison between the two sets of images.

As one student put it: “the beginning shows that her ability to fly is dependent on her father’s support, while the end shows a self conscious decision to jump or leap into the water.” This could show that she has learned to fly by the end in part because of what she learned from her father.

Other students said similar things, with some pointing to how we might consider that she is able to see the difficulties her father lived with and perhaps that helped her come to terms more with her own gender and sexual identity and live a bit more freely (though we also discussed how her ability to live more freely and openly probably had a lot to do with the time period in which she lived). One student pointed out that she seems to be in some ways the opposite of her father: openly gay, not living in Beech Creek–which could link up to the “reverse narration” in the quote on p. 232.

Another student stated that the fact that Alison willingly jumps into the pool at the end rather than falling involuntarily at the beginning could signal “acceptance and understanding, that she is finally at peace with her father.”

We talked a lot about Icarus and his father Daedalus in class, and how Alison’s father is said in the text to be both while Alison herself is in the position of Icarus in both the beginning & the end. This may have to do with their “entwined stories” (232), which we also discussed a bit–they are, as she puts it, “inversions” of one another (98; see also 221 where she says she felt like the father rather than the son in the Odysseus/Telemachus, Bloom/Stephen Deadalus relationship).

Daedalus made wings for he and his son to fly out of a prison and told his son not to fly too close to the sun or the wings would melt. He did, they did, and he fell; his father was unable to save him. In the beginning of the novel, Bruce supports Alison with the “wings” of his feet but she still falls; in the end, she “falls”/jumps and he is there to catch her. Icarus falls into the sea in the sense that Bruce dies, but because of the “reverse narration” of their “entwined stories” he is there to catch her (232). He falls into the sea but she, in her own role as Icarus, does not.

He is physically dead, but one might say not “spiritually” so (see the point about “spiritual” vs. “consubstantial” paternity p. 231), so in that sense he might be there to catch her.

This could relate back to what one student said, as noted above, that she was able to accept her father. Another student said that even if Alison falls “her father is there every step of the way. Even after his death he has an effect on her, enough to write this book.”

What I had thought

These points connect to the bit of interpretation I was able to give this before class. I was thinking that what changes between the beginning and end could be that she has written the novel and this has changed her. One student noted that the focus of the novel is not so much her father, but her relationship to him and her own struggle with him and his death. And perhaps by the end she has come to think of him differently.

Of course, she could actually have written the chapters in a different order than they appear in the book, but the beginning could be dedicated nevertheless how she felt about her father before writing the book, even if she wrote that part later. And by the end she might have been able to come to some acceptance, some trust in her father at least as a “spiritual” father, whatever that might mean.

But the reason why I asked this question in class was because I hadn’t fleshed this out fully and wanted to hear what others thought. And as usual, the students in the class helped add much more richness, some new ideas, and different directions to what I started with. Which is really what it’s all about.