In Arts One this past week we discussed Paul Auster’s novel City of Glass as well as the graphic novel adaptation by Paul Karasik and David Mazzucchelli.

We were very fortunate to have a guest lecture by Paul Karasik on the graphic novel, on Monday, March 27, and he gave a public lecture later that day as well.

One of the students in my Arts One seminar group asked him about the scribbled face that appears numerous times in the graphic novel. Karasik didn’t want to “give too much away,” and just said it had something to do with who the narrator of the story is. So of course we had to discuss this further in class!

We talked about it in small groups and then I took notes on the board on what the groups had discussed. I’m not sure it’s all going to make sense outside of the context of our class discussion, but here it is! (and you get to see my not-so-clear handwriting…) 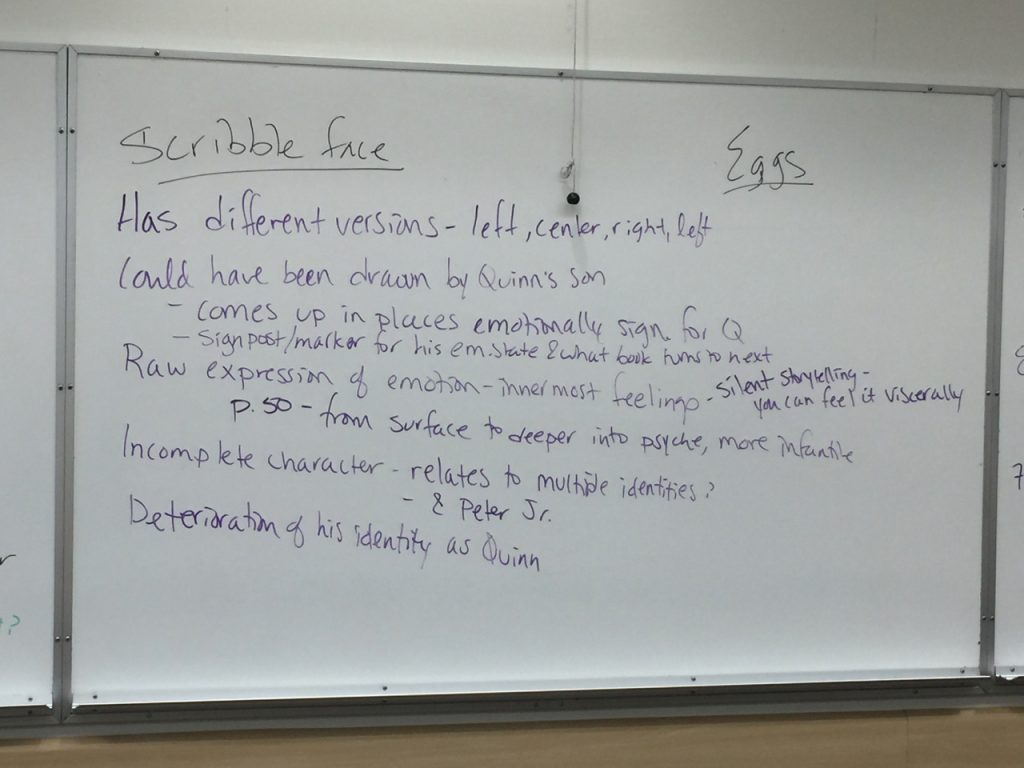 The first point: “Has different versions–left, centre, right, left” refers to how the face stars off facing left, then later we see it from a centred perspective, head on, and then is facing right, and then on the very last page where it is on a piece of paper in the pit it is facing left again. There are several possible interpretations for why this might be the case, and unfortunately I didn’t write down the one that was given by the student who noticed this and I can’t remember what it was! (Please comment below if you do). We also noticed that the expression is slightly different in it sometimes, such as when it is more angry on p. 52, when Quinn sees Peter Stillman Sr. for the first time.

We thought it might have been drawn by Quinn’s son, or even by Peter Stillman, since it looks like a child’s drawing. We noticed that it appears sometimes in places that are emotionally significant for Quinn, such as when he thinks about children raised by wolves, about Peter Stillman Jr., and about his own son; when he meets Peter Stilllman Sr. for the first time, and when Auster tells Quinn that the case is over because Stillman Sr. has committed suicide. Some students thought the face was a kind of raw expression of emotion, such as one might give with visual language rather than with textual language. As I wrote above, basing it on what the students said, you can “feel it viscerally” even more than you might if it were in words.

We also noticed that the face could be thought of as a kind of incomplete character, such as Miguel Mota spoke of Stillman Jr. being in Auster’s novel–he is a kind of puppet without a controller, a character without an author, someone who is incomplete and still needs filling out (he is all white, as if blank, and can’t use language well). The scribbled face could also represent Quinn himself as an incomplete character in the sense that Quinn has multiple identities and isn’t fully any one of them: Quinn, Wilson, Work, Auster…. The “deterioration of his identity as Quinn” is related–Quinn is losing himself as Quinn, becoming more of an incomplete shell of himself.

We didn’t come to any full conclusions, just discussed various possibilities. I myself don’t have a reading on this that I’m happy with. When I read the graphic novel I assumed that the scribbled face was a drawing done by Quinn’s dead son, and that it comes up for him at various times that are, as noted above, emotionally significant. It comes up first on p. 7 in between two panels when Quinn is going to sleep, suggesting that it emerges for him when his guard is down, perhaps, as something that he has been trying to repress–among other things, memories of his dead wife and son. And that fits with p. 33, when the face appears right after Stillman Jr’s face and his son’s face, and Quinn is thinking about children that grew up without parents. But that doesn’t go very far in explaining the face’s appearance in other parts of the book–why would it appear when Quinn is standing in the station as the train is arriving, next to the multiple images of Quinn himself, on p. 50?

Students in our class have also blogged about this question, and you can see those posts on our class website, here. Some interesting interpretations there…well worth a read!