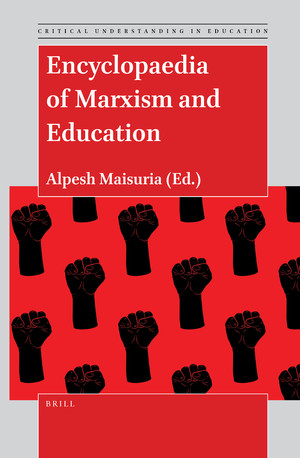 Brill has just published the Encyclopaedia of Marxism and Education, edited by Alpesh Maisuria, who is a professor in Education Policy in Critical Education at the University of the West of England, Bristol, UK.

“This encyclopaedia showcases the explanatory power of Marxist educational theory and practice. The entries have been written by 51 leading authors from across the globe. The 39 entries cover an impressive range of contemporary issues and historical problematics. The editor has designed the book to appeal to readers within the Marxism and education intellectual tradition, and also those who are curious newcomers, as well as critics of Marxism.

The Encyclopaedia of Marxism and Education is the first of its kind. It is a landmark text with relevance for years to come for the productive dialogue between Marxism and education for transformational thinking and practice.”

Please contact me if you would like a copy of our chapter on critical education, as I have a limited number of offprints I can share.

Acknowledgements
List of Figures and Tables
Notes on Contributors