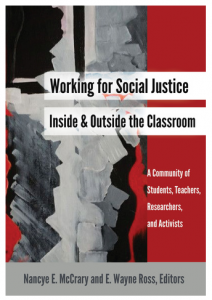 I am pleased to announce a new book just published by Peter Lang, Working for Social Justice Inside and Outside the Classroom: A Community of Students, Teachers, Researchers, and Activists, which I co-edited.