CRITICAL EDUCATION
Vol 3, No 10 (2012)
Our Pass-Fail Moment: Livable Ecology, Capitalism, Occupy, and What is to be Done
Paul Street

The ecological crisis is the leading issue of “our or any time” posing grave threats to a decent and democratic future. If the environmental catastrophe isn’t forestalled, “everything else we’re talking about won’t matter” (Noam Chomsky). Like other issues leftists cite as major developments of the last half-century, the environmental crisis is intimately bound up with numerous other deep changes (growing inequality, authoritarian neoliberalism, corporate globalization, U.S. imperial expansion, and more) and grounded in the imperatives of capital and the profits system. Tackling the crisis in a meaningful way will bring numerous related and collateral benefits (including significant opportunities for socially useful and necessary work/employment) beyond and alongside environmental survival. To prioritize ecology is not to demote or delay radical social reconstruction. It means the elevation and escalation of the red project. It is highly unlikely that the crisis can be solved within the framework of capitalism.

This article was originally delivered as a Keynote Address at the Rouge Forum 2012: Occupy Education! Class Conscious Pedagogies and Social Change, on June 21, 2012 at Miami University in Oxford, Ohio.

Links to Recent Articles of Interest

“US Outrage at Syria Veto at UN Rife with Hypocrisy”
By Stephen Zunes, TruthOut.org, posted February 8

“The Betrayal of the Nobel Peace Prize”
By David Swanson, WarIs a Crime.org, posted February 5

“The Pentagon Pitches its New Strategic Narrative”
By Allen Ruff and Steve Horn, AntiWar.com, posted January 30
Allen Ruff has a history PhD from the University of Wisconsin

“The People and the Patriots: Who Led Whom in the American Revolution”
By Alfred Young, Boston Review, Nov.-Dec. 2011 issue, posted January 25
The author is a professor of history emeritus at Northern Illinois University

“A WPA for History: Occupy the American Historical Association”
By Jesse Lemisch, TruthOut.org, posted January 24
The author is a professor of history emeritus at John Jay College, CUNY

“Henoko and the U.S. Military: A History of Dependence and Resistance”
By Steve Rabson, The Asia-Pacific Journal, Vol. 10 Issue 4 No. 2, January 23
On U.S. bases in Okinawa; the author is a professor of Asian Studies emeritus at Brown University

Historians Against the War: Links to Recent Articles of Interest

“Is a Nuclear War with China Possible?”
By Lawrence S. Wittner, History News Network, posted November 28
The author is a professor of history emeritus at SUNY Albany

“The Militarization of American Police Has Long Historical Roots”
By Jeremy Kuzmarov, History News Network, posted November 28
The author teaches history at the University of Tulsa

“Seymour Hersh: Propaganda Used Ahead of the Iraq War Is Now Being Reused over Iran’s Nuke Program”
Interview with Seymour Hersh on Democracy Now, posted on Alternet.org November 22

“Who Said Gaddafi Had to Go?”
By Hugh Roberts, London Review of Books, November 17 issue

“Big Change Whether We Like It or Not: Only Washington Is Clueless”
By Andrew Bacevich, TomDispatch.com, posted November 13
The author teaches history and international relations at Boston University

“Protest Planet: How a Neoliberal Shell Game Created an Age of Activism”
By Juan Cole, TomDispatch.com, posted November 10
The author teaches history at the University of Michigan

“China and the US: The Roadmaps”
By Pepe Escobar, Aljazeera, posted October 31

NPR’s Talk of the Nation

A video showing an officer methodically spraying pepper spray in the faces of seated protesters has created an uproar. While some say the incident represents a wider problem with the way police confront protesters, Santa Clara University professor (and founding editor of Workplace: A Journal for Academic Labor) Marc Bousquet argues that misses the point. 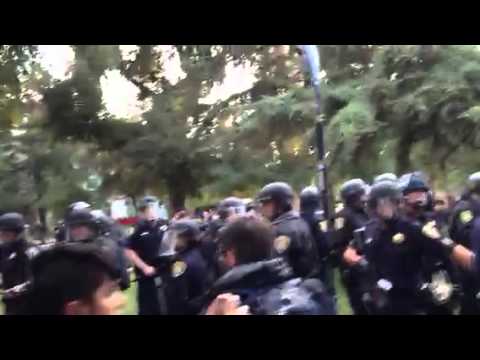 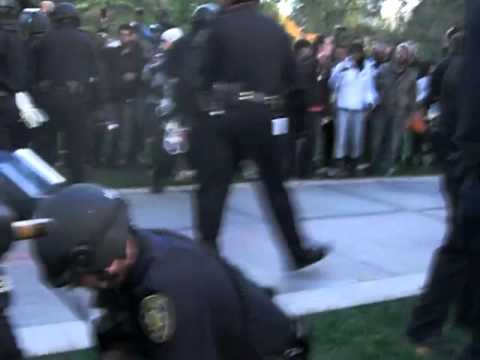 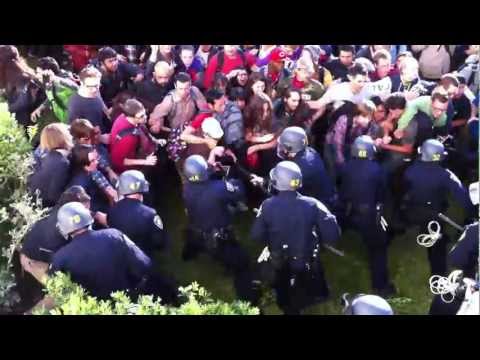 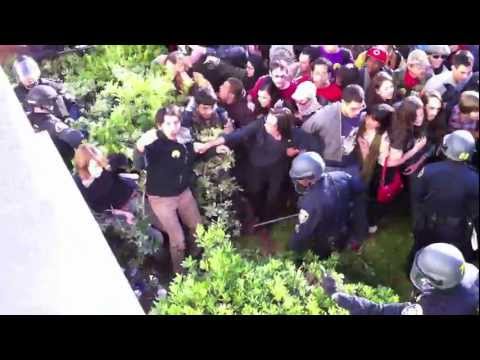 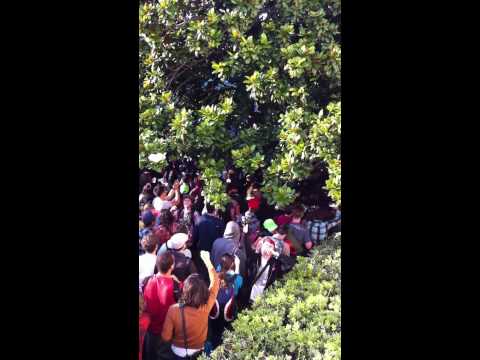 UC Berkeley professor on her arrest: Why I Got Arrested with Occupy Cal–and How

Our decaying corporate regime has strutted in Portland, Oakland and New York with their baton-wielding cops into a fool’s paradise. They think they can clean up “the mess”—always employing the language of personal hygiene and public security—by making us disappear. They think we will all go home and accept their corporate nation, a nation where crime and government policy have become indistinguishable, where nothing in America, including the ordinary citizen, is deemed by those in power worth protecting or preserving, where corporate oligarchs awash in hundreds of millions of dollars are permitted to loot and pillage the last shreds of collective wealth, human capital and natural resources, a nation where the poor do not eat and workers do not work, a nation where the sick die and children go hungry, a nation where the consent of the governed and the voice of the people is a cruel joke.

Get back into your cages, they are telling us. Return to watching the lies, absurdities, trivia and celebrity gossip we feed you in 24-hour cycles on television. Invest your emotional energy in the vast system of popular entertainment. Run up your credit card debt. Pay your loans. Be thankful for the scraps we toss. Chant back to us our phrases about democracy, greatness and freedom. Vote in our rigged political theater. Send your young men and women to fight and die in useless, unwinnable wars that provide corporations with huge profits. Stand by mutely as our bipartisan congressional supercommittee, either through consensus or cynical dysfunction, plunges you into a society without basic social services including unemployment benefits. Pay for the crimes of Wall Street.

The rogues’ gallery of Wall Street crooks, such as Lloyd Blankfein at Goldman Sachs, Howard Milstein at New York Private Bank & Trust, the media tycoon Rupert Murdoch, the Koch brothers and Jamie Dimon at JPMorgan Chase & Co., no doubt think it’s over. They think it is back to the business of harvesting what is left of America to swell their personal and corporate fortunes. But they no longer have any concept of what is happening around them. They are as mystified and clueless about these uprisings as the courtiers at Versailles or in the Forbidden City who never understood until the very end that their world was collapsing. The billionaire mayor of New York, enriched by a deregulated Wall Street, is unable to grasp why people would spend two months sleeping in an open park and marching on banks. He says he understands that the Occupy protests are “cathartic” and “entertaining,” as if demonstrating against the pain of being homeless and unemployed is a form of therapy or diversion, but that it is time to let the adults handle the affairs of state. Democratic and Republican mayors, along with their parties, have sold us out. But for them this is the beginning of the end.

The historian Crane Brinton in his book “Anatomy of a Revolution” laid out the common route to revolution. The preconditions for successful revolution, Brinton argued, are discontent that affects nearly all social classes, widespread feelings of entrapment and despair, unfulfilled expectations, a unified solidarity in opposition to a tiny power elite, a refusal by scholars and thinkers to continue to defend the actions of the ruling class, an inability of government to respond to the basic needs of citizens, a steady loss of will within the power elite itself and defections from the inner circle, a crippling isolation that leaves the power elite without any allies or outside support and, finally, a financial crisis. Our corporate elite, as far as Brinton was concerned, has amply fulfilled these preconditions. But it is Brinton’s next observation that is most worth remembering. Revolutions always begin, he wrote, by making impossible demands that if the government met would mean the end of the old configurations of power. The second stage, the one we have entered now, is the unsuccessful attempt by the power elite to quell the unrest and discontent through physical acts of repression.

I have seen my share of revolts, insurgencies and revolutions, from the guerrilla conflicts in the 1980s in Central America to the civil wars in Algeria, the Sudan and Yemen, to the Palestinian uprising to the revolutions in East Germany, Czechoslovakia and Romania as well as the wars in the former Yugoslavia. George Orwell wrote that all tyrannies rule through fraud and force, but that once the fraud is exposed they must rely exclusively on force. We have now entered the era of naked force. The vast million-person bureaucracy of the internal security and surveillance state will not be used to stop terrorism but to try and stop us.

Despotic regimes in the end collapse internally. Once the foot soldiers who are ordered to carry out acts of repression, such as the clearing of parks or arresting or even shooting demonstrators, no longer obey orders, the old regime swiftly crumbles. When the aging East German dictator Erich Honecker was unable to get paratroopers to fire on protesting crowds in Leipzig, the regime was finished. The same refusal to employ violence doomed the communist governments in Prague and Bucharest. I watched in December 1989 as the army general that the dictator Nicolae Ceausescu had depended on to crush protests condemned him to death on Christmas Day. Tunisia’s Ben Ali and Egypt’s Hosni Mubarak lost power once they could no longer count on the security forces to fire into crowds.

The process of defection among the ruling class and security forces is slow and often imperceptible. These defections are advanced through a rigid adherence to nonviolence, a refusal to respond to police provocation and a verbal respect for the blue-uniformed police, no matter how awful they can be while wading into a crowd and using batons as battering rams against human bodies. The resignations of Oakland Mayor Jean Quan’s deputy, Sharon Cornu, and the mayor’s legal adviser and longtime friend, Dan Siegel, in protest over the clearing of the Oakland encampment are some of the first cracks in the edifice. “Support Occupy Oakland, not the 1% and its government facilitators,” Siegel tweeted after his resignation.

There were times when I entered the ring as a boxer and knew, as did the spectators, that I was woefully mismatched. Ringers, experienced boxers in need of a tuneup or a little practice, would go to the clubs where semi-pros fought, lie about their long professional fight records, and toy with us. Those fights became about something other than winning. They became about dignity and self-respect. You fought to say something about who you were as a human being. These bouts were punishing, physically brutal and demoralizing. You would get knocked down and stagger back up. You would reel backward from a blow that felt like a cement block. You would taste the saltiness of your blood on your lips. Your vision would blur. Your ribs, the back of your neck and your abdomen would ache. Your legs would feel like lead. But the longer you held on, the more the crowd in the club turned in your favor. No one, even you, thought you could win. But then, every once in a while, the ringer would get overconfident. He would get careless. He would become a victim of his own hubris. And you would find deep within yourself some new burst of energy, some untapped strength and, with the fury of the dispossessed, bring him down. I have not put on a pair of boxing gloves for 30 years. But I felt this twinge of euphoria again in my stomach this morning, this utter certainty that the impossible is possible, this realization that the mighty will fall.