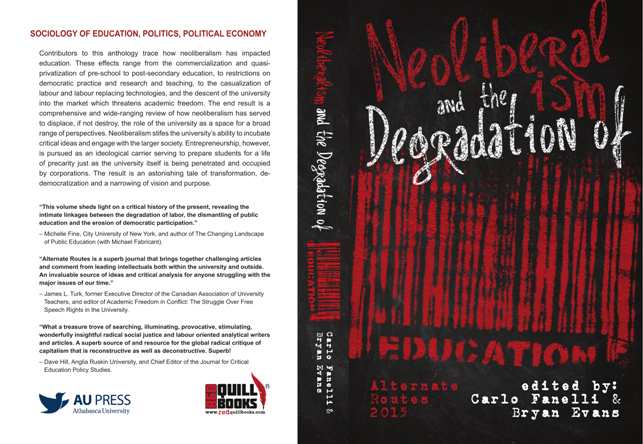 NEOLIBERALISM AND THE DEGRADATION OF EDUCATION

Contributors to this anthology trace how neoliberalism has impacted education. These effects range from the commercialization and quasi-privatization of pre-school to post-secondary education, to restrictions on democratic practice and research and teaching, to the casualization of labour and labour replacing technologies, and the descent of the university into the market which threatens academic freedom. The end result is a comprehensive and wide-ranging review of how neoliberalism has served to displace, if not destroy, the role of the university as a space for a broad range of perspectives. Neoliberalism stifes the university’s ability to incubate critical ideas and engage with the larger society. Entrepreneurship, however, is pursued as an ideological carrier serving to prepare students for a life of precarity just as the university itself is being penetrated and occupied by corporations. The result is an astonishing tale of transformation, de-democratization and a narrowing of vision and purpose.

While Americans waste their time discussing what position they’ll be in as they continued to get screwed by the bank bailouts and/or tweaking the reactionary education reform mess of No Child Left Behind students in Italy are saying “NO” to the Berlusconi government’s plan to impose business models on public services such as schools and universities that will see the disappearance of nearly 100,000 teaching positions in the next three years:

This “euthanasia of the universities”, as Gaetano Azzariti, professor of constitutional law at Rome university, calls it, was a political decision, sacrificing teaching and research to sectors of the economy. It means that for a university to hire a new lecturer now, two others have to leave its payroll. And it means more private sector funding in universities and higher tuition fees, leading to increased levels of debt for the poorest students. And on August 28, education minister Mariastella Gelmini presented another executive order, setting out budget cuts and plans to return to single teachers in primary schools (each class is normally taught by several different teachers), meaning a shorter school day for children (and reducing parents’ ability to go out to work). Other measures aimed to revive old practices, such as marks for behavior up to secondary level.

Since the start of the school year in September 2008, a national movement of parents, teachers and students resisting the neoliberal reforms of the Berlusconi government formed under the banner of “Non rubateci il futuro” (Don’t steal our future) and have spawned huge demonstrations and university occupations and general strikes.

“What’s developing is the self-organization of university students and casual workers,” explained Aliocha, a literature student at La Sapienza university who is also a casual in a bank. “Some people combine being casual workers and students or researchers, others are just casual workers. Together with the rank and file unions, we started the October 17 strike, and organized it in workplaces where job insecurity is an everyday reality.”