Homalothecium fulgescens is chiefly an epiphyte, most often seen growing on trunks and branches of deciduous trees. It is less frequently found growing on rock, concrete, soil or stabilized sand. This species is particularly abundant on Vancouver city street trees upon which it can sometimes form extensive glossy, golden yellow-green patches.

Homalothecium fulgescens typically forms shiny, golden-green mats that are usually firmly attached to trunks of deciduous trees. Although this species resembles other species in the genus within the B.C. flora, it is generally coarser and more irregularly branched than its congeners.  This species is probably most easily recognized when dry; in this state the branches tend to curl and the leaves become more loosely appressed to the stems and branches, imparting an overall “messy” appearance to the plants. Leaves are ovate-lanceolate to triangular-lanceolate, plicate, and gradually tapered to sharply pointed or narrowly-acute apices. The margins are more or less entire, though serrations, usually only evident at higher magnifications, are often present distally. 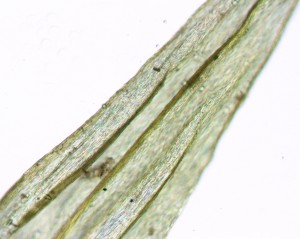 Sporophytes are commonly present. The sporangia are erect, cylindric, straight or slightly curved and situated at the end of long, roughened setae.

This species is very common in urban areas of southwestern B.C. and not likely to be mistaken for most other species in the area except for, perhaps, coarser expressions of H. nuttallii — another common urban moss with which it frequently occurs. That species, apart from usually being smaller and more regularly-branched, has distinctively dentate leaf margins which are easily seen microscopically. Possible confusion with Brachythecium spp. might also arise, though the species in that genus which most closely resemble Homalothecium fulgescens tend to be terrestrial rather than epiphytic.