The species in the class Marchantiopsida are characterized as being complex thalloid liverworts. They have a global distribution and are commonly found growing on moist earth or mud. A few species can also be observed growing in water.

The gametophore of the species in this class is always thallose. The thallus, which is generally several cell thick, typically exhibits dichotomous branching. 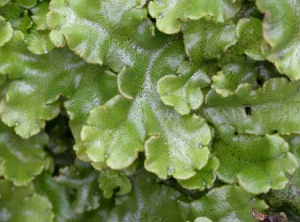 The internal differentiation of the thallus can be made apparent due to the presence of several distinct tissues. The upper surface (dorsal) of the thallus is composed of an epidermis that is unistratose. The cells forming the epidermis contain no or very little chlorophyll. Furthermore, the epidermis of most genera in this class has pores, which can either be simple or complex, that serve as an opening to the photosynthetic tissue in the air chambers beneath. The outline and distribution of the air chambers can be seen when looking at the reticulated pattern on the dorsal side of the thallus. 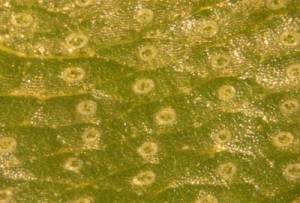 Unlike stomata seen in higher plants, simple pores of these thalloid liverworts cannot open and close. However, some species have complex pores, in which the pores are surrounded by cells, giving the pore a barrel-like appearance. The cells at the bottom of the barrel-like pore can remain turgid when in a moist environment, thereby keeping the pore open. When dry, these cells can collapse, and thus can greatly narrow the opening of the pore. 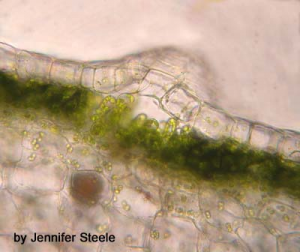 As previously mentioned, these air chambers house the photosynthetic tissue. The chloroplasts are typically located in the cells that make up the walls of these chambers or in uniseriate filaments found growing on the bottom of the air chamber.Below the chlorophyllous layer is where one can see a layer of storage cells, predominantly parenchymous cells. Some cells within this layer will contain a single large brownish complex oil body, while other cells may be filled with mucilage. Not only is the parenchymous tissue used for storage, but it can also be used to house fungi in order to benefit from a symbiotic relationship.

A ventral epidermis is present on the underside of the thallus, from which can emerge colorless rhizoids and scales. 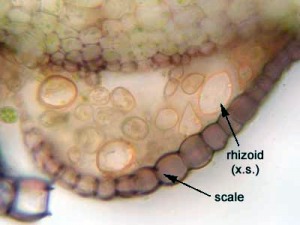 The rhizoids present can either pegged or smooth.  Pegged rhizoids are thought to be involved in water transport, whereas the smooth rhizoids aid in fixing the thallus to the substrate and are often considered a gateway for endophytic fungi. The ventral unistratose scales are typically arranged in one or two rows and are thought to function in water retention and conduction.

The gametophyte of the species in this class can either be monoicous or dioicous. The antheridia can be found in chambers that opens to the upper surface of the thallus. 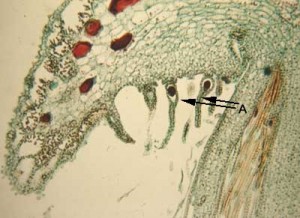 (the archegonia in the following picture are labeled).

However, it is important to keep in mind that the morphology of the male and female reproductive structures can vary considerably in this class. For example, the antheridiophore of some aquatic species is highly reduced. Instead of being elevated, the antheridia are embedded in the thallus, and the sperm are dispersed by water movement. However, the locomotive and biflagellate sperm is a distinctive trait that all species in this class share. 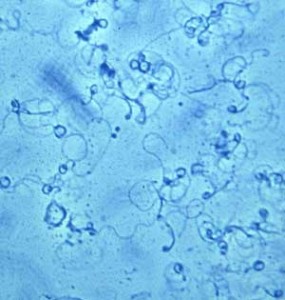 Asexual reproduction can be achieved by various ways depending on the species. In Marchantia, gemmae develop inside a cup-like structure on the surface of the thallus. Bifurcation, which is the splitting of the main thallus in two, is another means of asexual reproduction. This process is followed by the decay of the older posterior regions of the thallus, thus allowing the species to colonize nearby areas rapidly.