Andreaeobryopsida is one of the two classes that are commonly referred to as the “lantern mosses”, the other being the class Andreaeopsida. Their distribution is between northern Canada and Alaska and they are found growing on calcareous rocks.

The species in this class differ from those in Andreaeopsida in that they are dioecious, which means the male and female reproductive organs are born on separate gametophyte, and they possess a seta (the pseudopodium is absent).

When the plants are young, the tissues are green and chlorophyllose. However, as they mature, they turn dark black to reddish brown, due to the dark pigments obscuring the photosynthetic pigments. 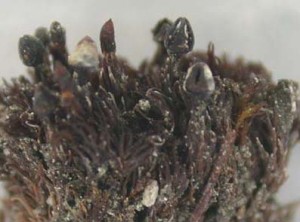