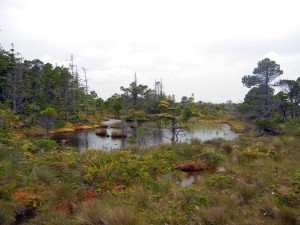 Mosses in the class Polytrichopsida are often considered as pioneer plants. Species in this class are acrocarpous and can be found on acidic, exposed and nutrient-poor soils, all the while exhibiting a wide distribution. Although smaller than Bryopsida, this class displays great diversity among species, ranging from the miniature plants of Pogonatum pensilvanicum with its highly reduced leaves, to the large gametophyte of Dawsonia superba, which can reach heights as tall as 50cm!!

Not only are the leaves of this class costate, but they also possess photosynthetic lamellae, a complex and unique leaf structure belonging to Polytrichopsida. The lamellae are vertical tiers of cells present on the surface of the leaf.

These structures are beneficial for many reason, one of them being it increases photosynthetic tissue. Furthermore, the air spaces created between the lamellae allow for gas exchange while the waxy cuticle covering the upper cells prevent water from flooding the air pockets. However, it is worth mentioning that although it functions in aiding gas exchange, the small spaces between the lamellae also function to retain moisture, allowing some species to survive in dry habitats. In some species, the lamina is incurved, thereby enclosing much of the lamellae. The variations in the height, number and morphology of the lamellae as well as the morphology of the lamina are often used as key characteristics to distinguish between species. Other characteristics of leaves also includes the presence/absence of hairpoints and colour. 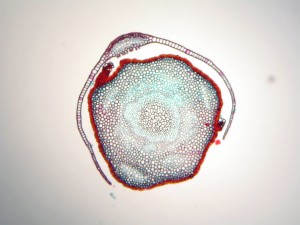 The vascularization in Polytrichopsida is well developed such that hydroids (water conducting cells; in the center) and leptoids (sugar conducting cells; external to the hydroids), as well as cortical cells are present in the stem, which may be key in allowing some species in this class to be quite large (relatively). Note the leaf trace visible in this stem cross section.

In many Polytrichum species, the antheridia (as seen in this picture) are housed in a rosette of leaves, functioning as a splash cup mechanism. Furthermore, the paraphyses can be uniseriate in some species, while they can be biseriate in others. 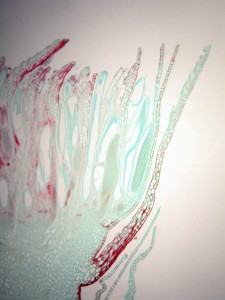 When mature, the sperm can be dispersed with the aid of raindrops, hopefully being splashed onto a female plant where the sperm can swim towards the archegonia.

After fertilization occurs, the sporophytic tissues develop forming a foot, a long seta, and the sporangium. The sporangium continues to develop within the calyptra. In the case of some species, the calyptra is hairy, which is why the mosses in this class have earned the nickname “hairy cap mosses”. Spores are the result of meiosis within the sporogenous tissue that surrounds the columella within the sporangium. In Polytrichopsida, the peristome is nematodontous. The teeth are composed of entire cells rather than fragments (as seen In Bryopsida). These teeth, which exhibit less movement than the hygroscopic arthrodontous teeth, are attached to a disk-shaped epiphragm, which develops from the extension of the columella.

Once the operculum is shed, the spores are released through the small openings between the teeth. These openings prevent all the spores from being dispersed at once, thereby prolonging the dispersal time and maximizing the chances spores of being released in optimum conditions.

Species in the Class Polytrichopsida include: