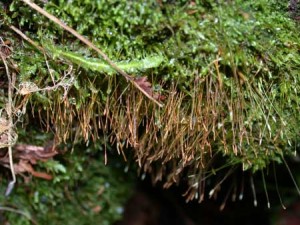 The mosses in the class Tetraphidopsida are commonly referred to as nematondontous mosses, or as having “unjointed teeth”. The species in this class have four peristome teeth that are composed of whole cells, unlike the arthrodontous mosses which have teeth composed of cell wall fragments.The plants in this class are acrocarpous and small in size.

The highly branched, uniseriate, and green filamentous protonemal stage of these species is attached to the substrate by rhizoids. Furthermore, protonemal flaps, which are rich in chloroplasts, develop from the protonema in some species. 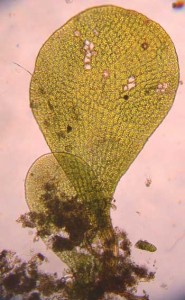 These flaps, although small, can be seen standing erect and growing on decaying wood in shaded areas. From the base of these protonemal flaps, gemmiferous shoots can develop, such as in Tetraphis pellucida. These shoots play a significant role in asexual reproduction. At the tip of these shoots is where there are cup-shaped whorls of leaves that house gemmae. This morphological structure functions as a splash-cup mechanism.

As previously mentioned, the sporangium has four peristome teeth that are made of entire cells. The nematodontous teeth may not move as much as the hygroscopic arthrodontous teeth, however there can still be movement that aid in the release and dispersal of the spores. Furthermore, the long twisted seta of some species (as seen in the picture below) can also aid in dispersing spores. By twisting in response to moisture change, this hygroscopic reaction causes the seta to untwist, thereby resulting in the movement of the sporangium. 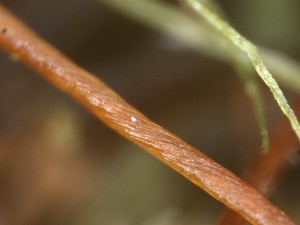 A rare sexual change can occur in Tetraphidopsida. It has been observed that if the eggs in a perichaetium are not fertilized one year, it can develop a perigonial branch with antheridia the following year.

The Tetraphidopsida class includes two genera. The genera Tetraphis includes two species, one of which is Tetraphis pellucida, the other being Tetraphis geniculata. The other genus,Tetrodontium consists of two species: T. brownianum and T. repandum.