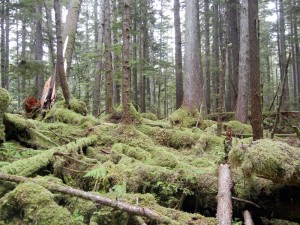 Bryophytes (mosses, hornworts, and liverworts) can be found in all ecosystems of earth.  The diversity of bryophytes increases at tropical and subtropical latitudes.  British Columbia has the highest bryophyte diversity in Canada so this is a wonderful place to study them. Another term commonly used for this group is nonvascular plants.  Bryophytes lack xylem and phloem, the conductive tissues of vascular plants (=tracheophytes).  Bryophytes and tracheophytes are monophyletic and collectively called embryophytes.  As the name implies, there is an embryonic stage in these organisms as contrasted with their closest relative of green algae.. 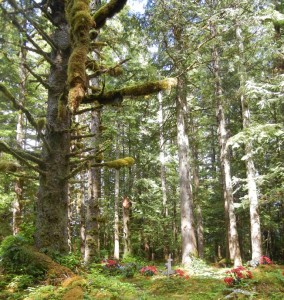 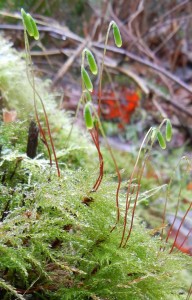 Bryophytes, on the other hand, have a conspicuous gametophyte stage (in most cases) that forms the green mats and tufts we see.  Unlike tracheophytes, it is the gametophyte stage that is composed of either stem and leaves or flattened ribbon-like thallus.  The leaves of bryophytes are structurally very different from those of tracheophytes; they are generally one cell layer thick!  The sporophyte of bryophytes is dependent on the gametophyte for water and nutrients and in most cases conspicuous (as you can see in the image of Leucolepis acanthoneuron to the left).  Unlike the multisporangiate indeterminate sporophyte of the tracheophytes, bryophyte sporophytes are unisporangiate and determinate; once spores are shed from the often elaborate sporangium that is it! 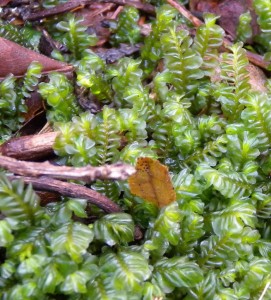 Bryophytes, while very simple, exhibit a great diversity in growth form and habitat.  There are bryophytes that can withstand extended periods of desiccation and others that are aquatic.  You will find them on virtually every substrate: rocks, soil, tree bark, decaying wood, and even cars and other synthetic materials.  Due to their diminutive stature and few human applications they have remained a largely overlooked group of organisms.  Mosses, liverworts, and hornworts are the most ancient lineages of plants and can offer some clues about early plant evolution.  While to most they seem small versions of their vascular relatives their life strategies have set them on a very different course.  Many of their qualities are a reflection of this.  What a fascinating group of organisms!