Ceratodon purpureus is typically found growing in areas that are frequently disturbed or on soils that are sterile. It is one of the most common cosmopolitan mosses, occurring on a wide variety of substrata, particularly those that are well-drained and acidic. Ceratodon purpureus is considered to be a pioneer species and can often be seen in abundance on burn sites. If growing in an area that is not disturbed, it is most likely growing in a site that is exposed and dries out rapidly, such as on walls, roadsides and rooftops. The common names “red roof moss” and “fire moss” make reference to some of its preferred habitats. 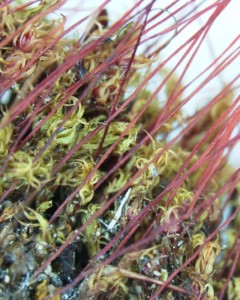 This small plant usually forms cushions or dense short tufts that can vary in color from yellow to mid-green or red to purplish-brown. The shoots, which are usually unbranched, can reach a height of up to around 3 cm.

The leaves of this species are lance-shaped, typically spreading when moist and contorted when dry. Furthermore, the margins are recurved from the base to the tip of the leaf. A strong single costa runs the length of the leaf, ending in the leaf’s acutely-pointed apex. Teeth are often present along the margins near the apex.

A closer look at the cells in the leaf will reveal that the upper cells are quadrate and smooth, while those closer to the base are usually somewhat longer. Furthermore, the cells that form the alar region are not differentiated.

The stems, which are red-brown in color, are typically unbranched and are upright. 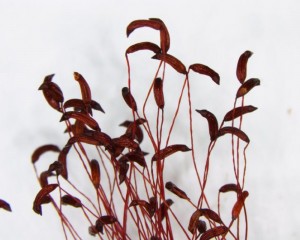 The common sporophytes are oblong to long-cylindrical in shape and have a swollen base. When they are young and immature they tend to be almost upright, smooth and green in color. 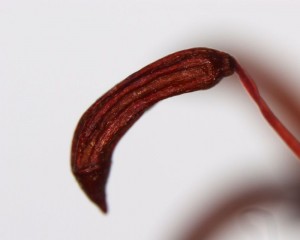 As they mature, they become more inclined and change to a reddish-brown to purplish color.

The older and dry sporangia are generally ribbed and the peristome is single. 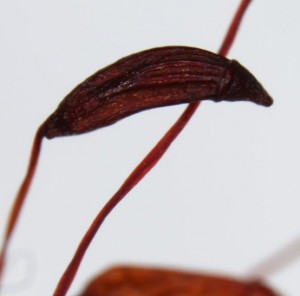 The seta of this species is generally reddish in color when young and becomes purple when it reaches maturity, which is a distinctive characteristic of C. purpureus.

A common and widespread species, Ceratodon purpureus exhibits a wide degree of morphological variation, sometimes leading to the recognition of different taxa at various taxonomic levels. Although generally easily recognized with experience, occasional confusion with other superficially similar taxa (e.g. Didymodon spp.) can occur, especially when plants are sterile. In such cases, closer examination with a compound microscope may be required to name difficult specimens with confidence.